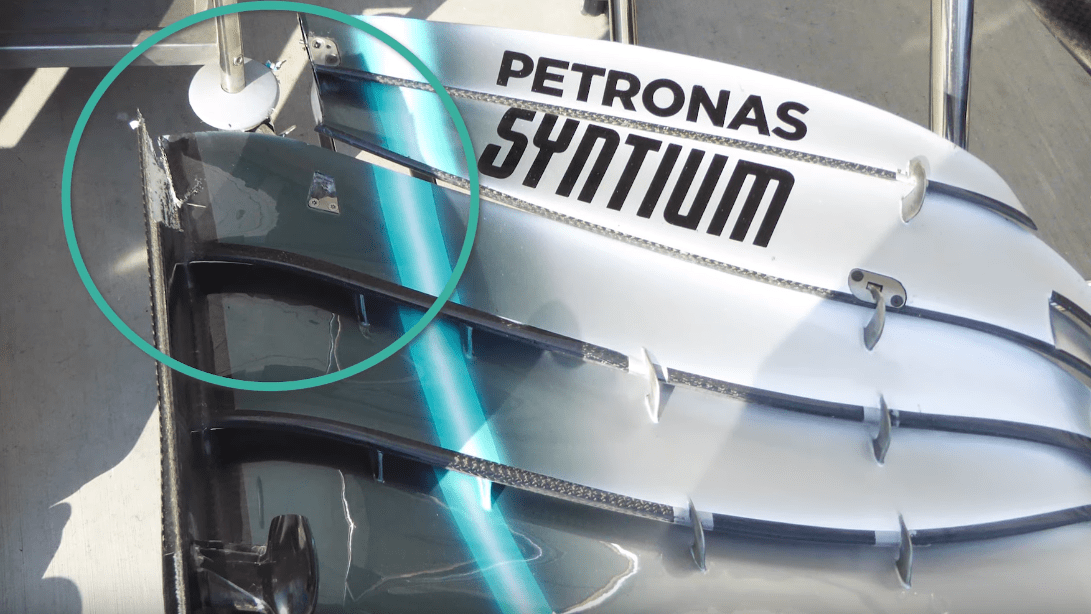 Mercedes has shared an image of the wing damage to Valtteri Bottas car in F1 Hungarian GP as James Vowles explains strategy decisions.

Already at the start of the F1 Hungarian GP at Hungaroring, Mercedes had data to crunch when Bottas suffered damage to his front wing after hits from Lewis Hamilton and Ferrari’s Charles Leclerc.

In their post-race debrief, Mercedes has showed an image of the damaged wing as its strategy director Vowles relayed the assessment being done by the team after the damage it suffered.

“The damage wasn’t so sufficient that it required a front wing change immediately, there was damage but we had to take our time to assess exactly how much lap time Valtteri was losing as a result,” he said.

“The damage there was isn’t much that the whole flap has fallen, but it lose performance. And more so, Valtteri, because of multiple lock-ups, started to have very big vibrations on the tyres.

“We left Valtteri a few laps to access the whole situation, but ultimately the vibrations were so significant and this damage then had so much performance loss, that we brought him in and changed the front wing.

“And thus we converted it into a two-stop race.” Staying on Bottas, Vowles also explained that the Hungaroring track design and his early damage actually played a negative role for him to pass at ease.

With everyone around him on a relatively fresh tyres like him at the start of the grand prix, he did not have the advantage of tyre delta to pass at ease. Moving on to Hamilton’s strategy decision, Vowles admits it to be big calls.

The undercut at the first stop to catch Red Bull’s Max Verstappen didn’t work and so they were forced to try overcut which nearly worked. But having lost that fight, Mercedes went for the second and less desired option.

“On the first stint of the race it was clear that in order to beat Verstappen we were either going to have to undercut him, or do an overcut and try and create a tyre offset,” said Vowles.

“Obviously, we went for the latter of the two but we very much considered the undercut. The problem is we had two Ferraris in the pit window – both Vettel and Leclerc for many laps.

“Eventually, Vettel moved out and it was only Leclerc in the window, and that was the decision point we had to make: do we want to stop and try an undercut? There were two problems.

“The first is the hard has a small warm-up scope. It wasn’t quite ready for the first few corners when you went out, so it’s difficult to immediately be on the pace of Verstappen who would have stayed out, the second is: you would have to overtake a very fast Ferrari immediately on exit.

“And the reality is, when you are only a second and a half behind a car like Verstappen’s, you are not going to make up all that time on an out-lap. So, we decided to stay long.

“Verstappen stopped on the first opportunity he could where he had a free air gap, that was the right thing for them to do, and that then led us to go long and offset.

“No-one had long run the hard tyre, run it with fuel to understand how the wear, the degradation and how it would progress in the race. And that creates a lot of unknowns.

“Everyone went into the race, ourselves included, with the intention of one-stopping. It is incredibly difficult to overtake in Budapest, and the tyres should make it based on our forecasts of tyre life.

“As we went in it was clear there was no undercut opportunity, our next plan was to offset ourselves on tyres relative to Verstappen. We have a team behind the scenes that are working tirelessly.

“They took the morsels of data from Friday, the little running that we had, and constructed models as to how our tyres and Verstappen’s tyres would perform during the race. And they were spot on.

“It is those models that enable us to understand that two-stop would very much lead to a fantastic situation at the end of the race, and that Verstappen’s tyres should drop off the curve if we can pressure him enough.

“Once we had committed and pitted Lewis, it was clear that there was this huge mountain to climb. We had 20 seconds of race time that we had to make up, and then we had to overtake Verstappen at the end of the race.

“Lewis, rightly so, had concerns about that but every lap he delivered a lap time we needed in order to do that. It caused Verstappen to have to respond, and fight hard and use the tyre he had available to him to pull that gap further, but it was with no avail, ultimately.

“He fell off the tyre curve, as the team predicted, and we ended up with the win.” As Vowles explained at length, Mercedes gambled and used the opportunity to pit, which they wouldn’t have done if they were in front.