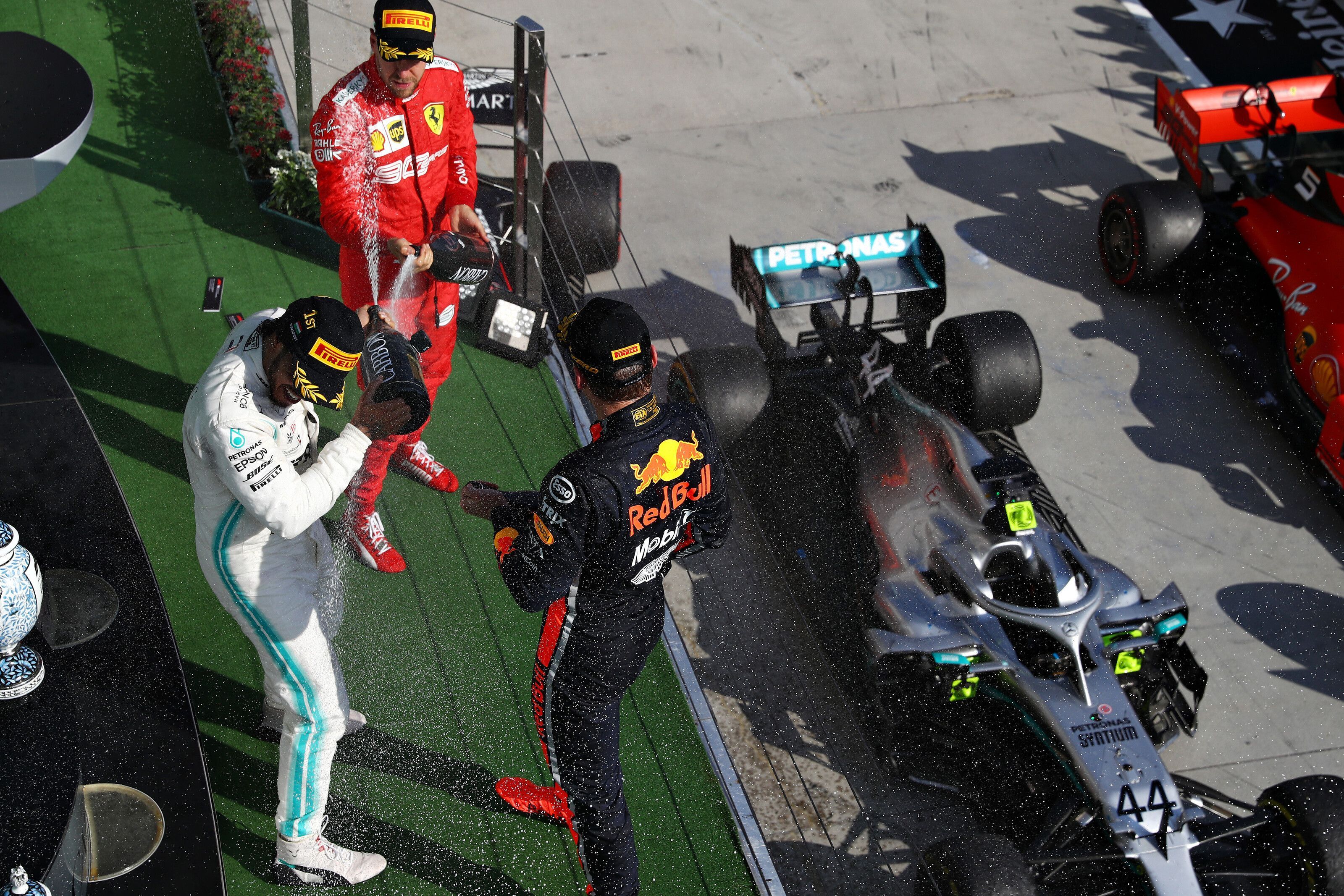 Lewis Hamilton, Max Verstappen and Sebastian Vettel did not shy away from a joke after F1 Hungarian GP over Fernando Alonso and rating themselves.

After a fiery F1 Hungarian GP at Hungaroring, where Mercedes’ strategy and Hamilton’s chase down helped him score eighth win of the 2019 season ahead of Red Bull Racing’s Verstappen and Ferrari’s Vettel, the trio had some with the media in their briefing.

It was certainly a happy media session as F1 heads towards the summer break after 11 hectic races. In general, the drivers do fill in with their jokes and when Renault’s Daniel Ricciardo is around, it more or less turns out to be hilarious but this time it was others.

The first talk was around self-rating, where they were asked to give themselves points out of 10 with regards to how their first half went. While Hamilton and Vettel duly obliged, Verstappen didn’t as the Dutchman doesn’t believe in rating himself.

Q) Now the summer break has started, the first part of the season is over so could you please rate your own performance from one to ten, one is the worst, ten is the best and explain briefly why you give yourself that mark?

Vettel: “Five, not happy with the first half. I think I struggled here and there to really get on top of the car. I think we’ve been trying a lot of things so fair enough. Obviously we wanted to squeeze out more so you’re always looking for more but I feel I can do a better job in the second half. And five is my number, so take five.”

Hamilton: “If it wasn’t for the last one, the last race, it would be a little bit higher. I think the good thing is always to score yourself a little bit lower so you’ve more to work on. For sure, it’s been the best start of the season that I think we’ve ever had as a team and I think it’s one of the best seasons that I’ve had personally to start off, but there are areas that we can continue to work on.

“That’s the great thing about this sport, you know, no matter how many years and days you race there are always areas you can improve on. So let’s see if we can try and up that into the nines or try to get to the tens in the second half of the season.”

Verstappen: “I don’t rate myself in numbers.”

Vettel: “What do you do instead? Letters? Or…”

Verstappen: “No, I hate putting a number on it because it reminds me of school as well, which is not that long ago. I’m always quite critical and I think it always can be better. I’ll never be satisfied. I think it’s been very positive and I’ve had good results but there are always things to work on.”

Verstappen: “Yeah, I know but… I don’t know, I think it’s… First of all, I cannot rate myself like that.”

Hamilton: “Why not, you’ve done a good job man?”

Verstappen: I know, but… I don’t know. I find it a bit weird to say an eight or…”

Q: Lewis, how would you rate Max if you gave him a number?

Hamilton: “I don’t remember all the races that you’ve done other than the last three or four. You could say he’s in the high nines over the last few races but I can’t remember how it went before.”

Hamilton: “It’s easier to rate yourself because you often remember how many mistakes you’ve made, when you’ve done good, when you’ve kind of been under par and he’ll know whether he’s been on par or below par. I think today he drove exceptionally as he has particularly in the past three or four races so if that continues he’s going to continue to operate in the high nines towards tens.”

The next one was related to Alonso, who tweeted about the show put on by Hamilton and Verstappen, which also carried a shot as he has been talking about the gap between the Top 3 teams to the others competing F1 in the hybrid era.

Q: Lewis and Max, Fernando Alonso praised your performance on social media. It seems he enjoyed the battle as well. Would you like to see him back in Formula One and race against him again?

Hamilton: “Well, firstly that’s really awesome that he’s supportive… I was just actually watching some of the restarts, the starts of previous years and watching him from his Renault days and I remember just before I even got to F1 watching how amazing their starts were.

“I don’t know how old Fernando is now but he’s always going to be a great driver. If he can get a good seat, he’s always welcome here to battle with us. It doesn’t make a difference, really, necessarily for me. I’m here to fight whoever’s here.”

Verstappen: “Yeah, I think it was a bit of a shame that I never had an opportunity to fight against him in F1 so yeah…”

Hamilton: “Could be a good team-mate for you.”

Verstappen: “Fernando? Well, you have experience with it, I don’t know. Well…”

Vettel: “He could be your father!”

Hamilton: “How old are you now?”

Hamilton: “Jeez. I like being in this room because I’m not the oldest.”

Verstappen: “I’m not that young!”

Q: Sebastian, final thoughts on Fernando? Would you like to see him back?

Verstappen: “Maybe as a social media manager. To me, he’s always been very nice and good. I like that he is also now looking into other opportunities for racing. He just loves racing and he wants to win, he wants to be competitive. It’s good to see.”

Verstappen: “Maybe he could speak to Toto.”

Hamilton: “Valtteri’s great; Valtteri’s been winning. You’re the one with the extra seat, I would say.”

Verstappen: “I didn’t say that.”

Vettel: “I’m not sure. [Goes off-mic via BBC] I don’t think the Japanese people will like it.”