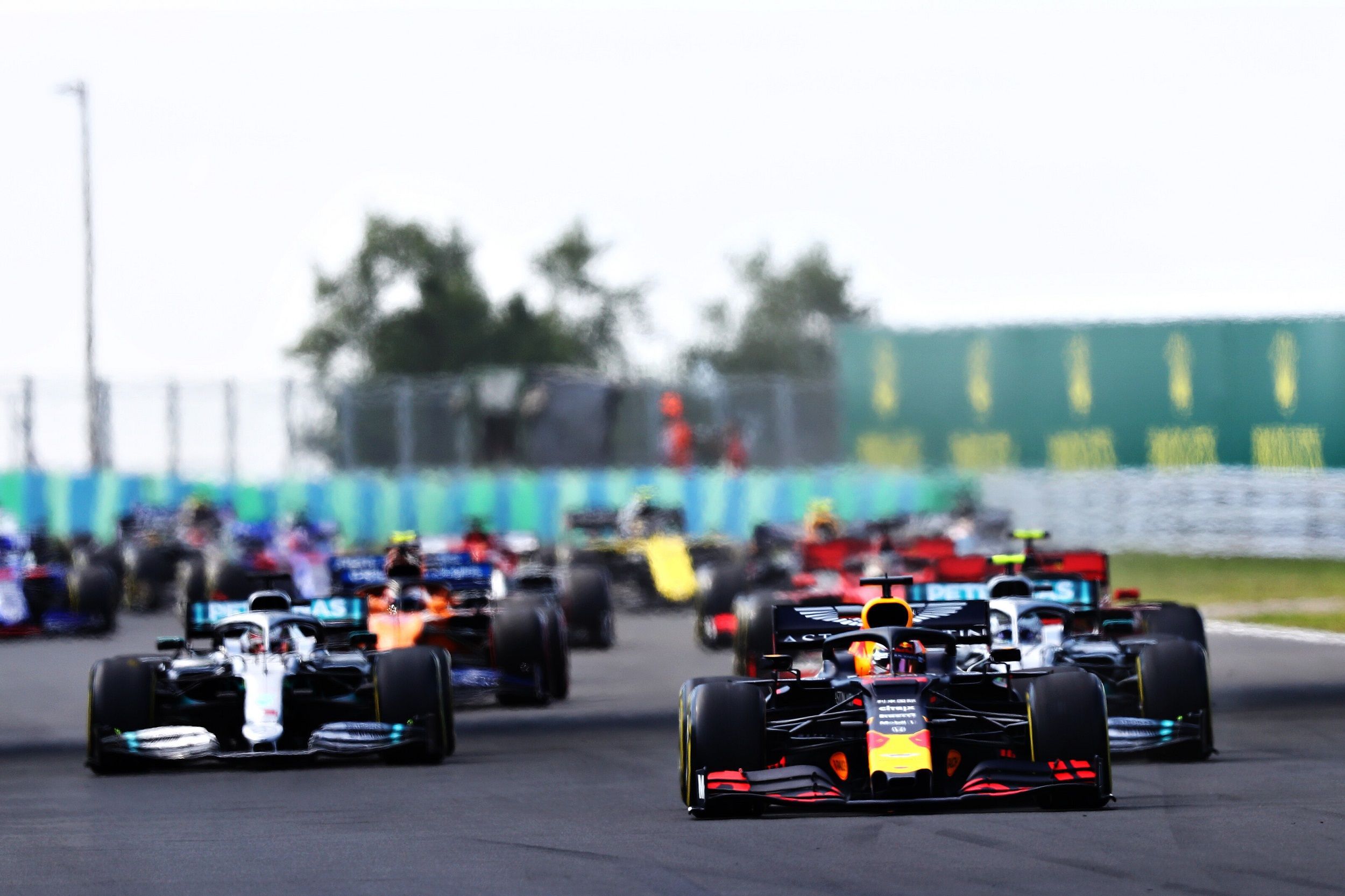 Pole-sitter Red Bull’s Verstappen led the way in F1 Hungarian GP at Hungaroring as the two Mercedes drivers went wheel-to-wheel in the first few corners with Hamilton winning the fight after the two touched slightly as Bottas slowed down and fell into Ferrari’s hands.

With his front right already slightly damaged, it suffered further jolt when Ferrari’s Charles Leclerc hit the same place which forced Bottas to pit after he also lost out to Sebastian Vettel. He dropped to last with a set of hard compounds to go to the end of the race.

Behind, McLaren’s Carlos Sainz got in front of Lando Norris in fifth as Alfa Romeo Racing’s Kimi Raikkonen was seventh from Red Bull’s Pierre Gasly, who dropped places at the start. Renault’s Nico Hulkenberg and Racing Point’s Sergio Perez rounded the Top 10.

As Verstappen led the way, Hamilton stayed on his tail as it started to become a strategy game with Red Bull bringing him on Lap 26 to switch to the hard compound as Mercedes kept Hamilton out to eventually pit on Lap 31, to hard as well.

Once on the fresh set, Hamilton clawed into Verstappen’s lead as the two ensued in a fight for the race lead as the short lap got the back-markers in the game too. The British driver nearly got Verstappen but went wide at Turn 4 to stay in the second.

Behind, Leclerc hung to third with Vettel in fourth in a different strategy as he pitted way past the half distance to switch to the soft compound. The best of the rest leader remained Sainz as Gasly made up two places to be sixth after the pit stops.

It was Raikkonen losing one place to be seventh with a slow stop for Norris meant he was eighth ahead of a recovering Bottas and Renault’s Daniel Ricciardo – with the latter not having stopped, having started on the hard tyres, which put Perez in a good place.

The grand prix scenario changed after Mercedes went for an interesting gamble when they decided to pit Hamilton for medium compounds, in the hope that they are able to catch Verstappen and pass him towards the end, if he stays out.

The Red Bull camp went for the latter as it was then to see if Hamilton manages to catch Verstappen by the end of the race. Bottas, meanwhile, also switched to the two-stop strategy and regained places to be ninth after passing three cars lap after lap.

As the laps started to trim down, Verstappen started to struggle a bit with Hamilton catching him quickly. It was only time for the British driver to get on the tail of Verstappen, which he did with three laps to go and went past him at Turn 1 to take the race lead.

With a free stop available, Verstapped pitted straightaway for a fresh set of soft to go for the fastest lap. A long way behind, Ferrari drivers swapped places with Vettel getting past Leclerc at Turn 1 on a different strategy to take third.

In the midfield fight, Bottas found a way past Norris to be eighth as he slotted in behind Raikkonen as Toro Rosso’s Alexander Albon got himself inside the Top 10 after passing Daniil Kvyat and Perez – the Thai’s race included a wheel-to-wheel with his teammate.

At the front though, Hamilton eased in to win the Hungarian GP – his eighth of the 2019 F1 season and his seventh at Hungaroring. Verstappen had to settle for second with the fastest lap as Vettel completed the podium places to complete the first half.

Leclerc settled for fourth – the last driver to not to be lapped, as Sainz made it a second successive Top 5 finish, to keep Gasly at bay. Raikkonen finished seventh as he held off Bottas, with the Hungarian GP Top 10 being completed by Norris and Albon then.

Having been in the points early on, Perez ended up 11th in the end as he he had the train of Hulkenberg, Magnussen and Ricciardo on his tail – all separated very closely. The Australian tried all his might to pass the Dane in the grand prix but couldn’t get past.

From everyone from Sainz until Ricciardo, they ended up a lap down, with Kvyat in 15th leading Williams’ George Russell and Racing Point’s Lance Stroll finishing two laps down barring Williams’ Robert Kubica, who was three laps down.