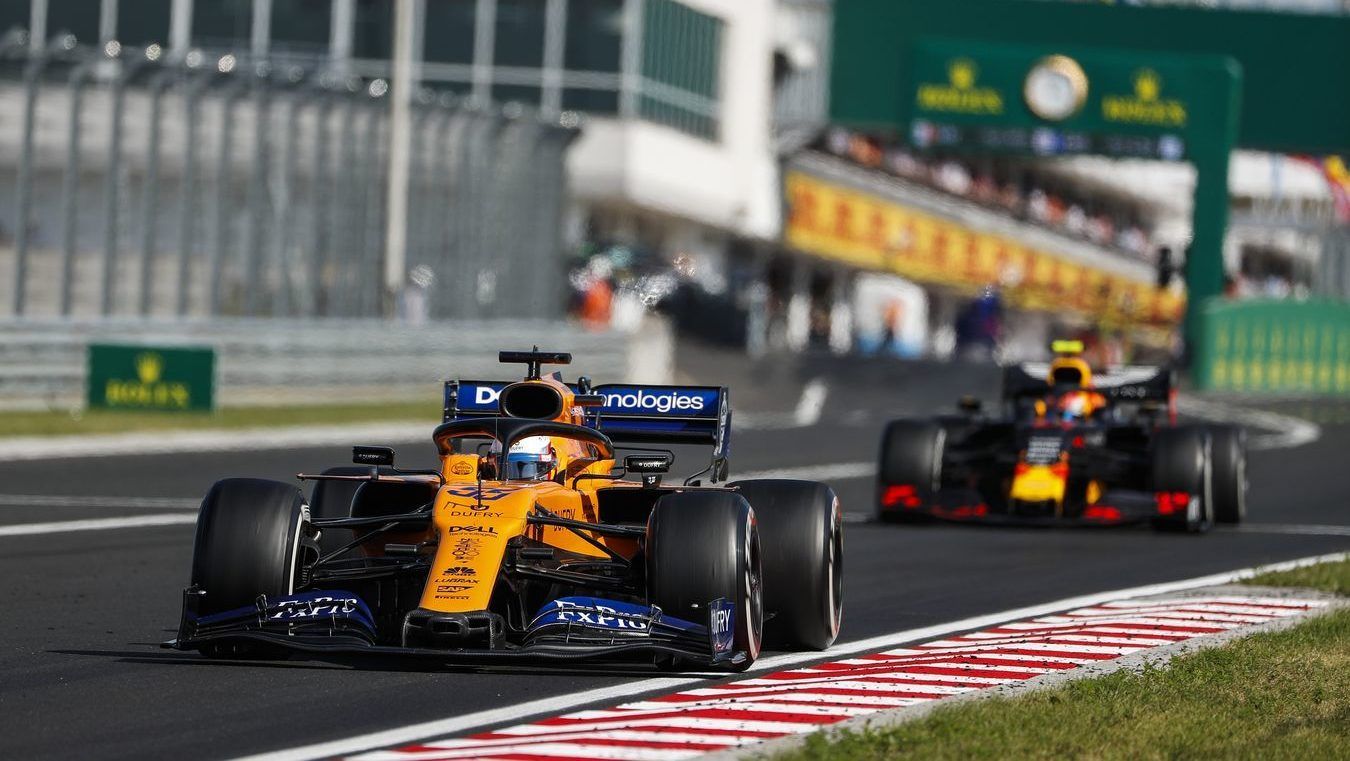 Carlos Sainz had all smiles after finishing fifth in a fairly normal F1 Hungarian GP for McLaren ahead of a Red Bull Racing and Mercedes car.

The refurbished driver line-up at McLaren with Sainz and Lando Norris along with progress internally, has brought McLaren back in the game albeit in the midfield fight for the time being.

Sainz scored a solid fifth in a rain-interrupted German GP and followed it up with another Top 5 result in a dry Hungarian GP, where he fended off Red Bull’s Pierre Gasly, while Mercedes’ Valtteri Bottas was behind too.

Even though Sainz has had some issues in qualifying, the Spaniard’s racecraft along with the correct strategy from McLaren has helped him deliver results which has put the team in a firm fourth position.

It has 82 points to the next best of Toro Rosso with 43, which puts in a supreme position to finish fourth in 2019. Sainz, as well, leads the best of the rest in seventh with 58 points to Kimi Raikkonen’s 31.

In fact, he is only five points behind Gasly. “I am very happy to beat a Mercedes and Red Bull in a normal race,” said Sainz. “I had a good start and then great pace in the first stint.

“In fact, I was told that the last 10 laps in the first stint was actually quicker than the Ferraris. Holding Gasly behind in the second stint was intense, but I controlled the pace to counter-attack any opportunity he had to get closer and managed to finish ahead of a Red Bull on pure pace.

So, finishing P5 in a normal race is really good news. I think these first dozen races show how much progress we’ve made this season, and we now need to keep digging. The ambition is to get closer and closer.

“Everyone can be proud of how things are going and the consistency we’re achieving. To keep learning in the second half of the season is important to try to build a better car for next year and take another step.”

While Sainz enjoyed a good run, teammate Norris had a good start to be behind him in the first first stint but a slow pit stop cost him track position to Gasly and Raikkonen. He was later overtaken by Bottas as well.

Nevertheless, he finished ninth to score more points. “I had a good start, where I came up to a lot of the guys ahead, which was good,” said Norris. “I got past Gasly straight away.

“But I knew Carlos was somewhere on the inside, so I played it safe and gave him plenty of space. With hindsight, I think I could’ve stayed ahead but I didn’t want to take the risk.

“P7 in the first stint was alright, following Carlos the whole way. Then we did our pit-stop and I think the left rear was a bit slow. We lost all of our positions there, basically.

“The pace was good but the Mercedes was a bit quicker at the end. Apart from that it was an alright race.” He is 10th in the drivers’ championship with 24 points, only seven behind Raikkonen.