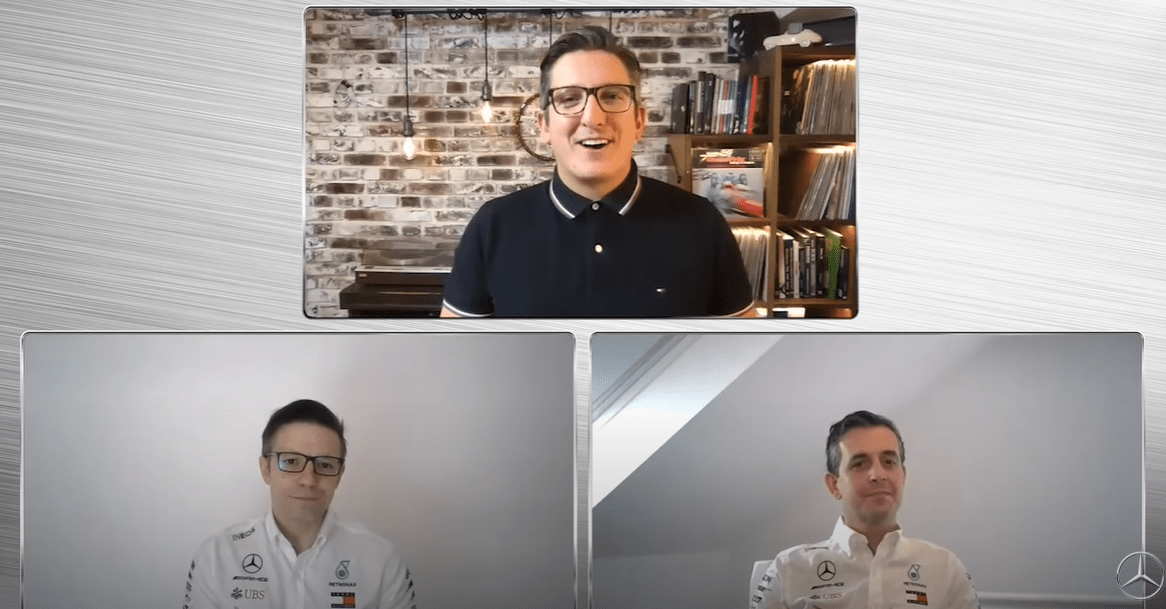 Mercedes F1 had race engineers Peter Bonnington and Ricciardo Musconi in the latest episode of ‘In Conversation With’ to talk about their work and more.

For the first time in the very short history of Mercedes ‘In Conversation with’ series, the episode was host to two guests, both being the lead race engineers of their respective cars within the Brackley-based F1 team.

One of the two was the now-famous Bonnington (Bono) – a familiar face due to his involvement with Lewis Hamilton’s races, and the other of the two was Musconi – the man in charge on Valtteri Bottas’ side of the Mercedes garage.

Bono was the first to be addressed, with the moderator asking what the role of a senior race engineer was, with the Brit pinning his job description as being a ‘jack of all trades’. After this, ‘Riki’, as Musconi is known, answered in relation to the differences between his old job and new one, which he adopted last year, with a win for his driver on debut.

On the topic of starting out in the positions that the Mercedes F1 duo respectively hold, Bono discussed his beginnings as a race engineer, which was a smooth transition back in the days of near-unlimited testing in F1.

In the case of Bono, his first race in the ‘hot seat’ was with Michael Schumacher, and after recalling this experience, he elaborated on what it’s like managing the strategies and talking to the driver. Riki also spoke on how this is for him with Bottas.

In their answers, both stressed the importance of trust and a good relationship between themselves and their drivers, before addressing – when probed – how they build these relationships to be strong in a fast-paced and ever-changing sport like F1.

Also on the theme of driver relationships, Bono told the story of how the ‘Hammertime’ radio call came to be, originating as a loophole to get away with instructing Hamilton on how hard to push in an era where driver coaching via radio was banned.

The Mercedes duo also answered technical questions about how many channels the race engineers use, as well as the format of the garage and pit-wall, which has changed dramatically in the last several years as technology expand in F1.

Some personal conversations about home projects as well as Bono’s motorcycle passion and Riki’s love of music and cooking ensued, before conversation re-centered around F1, with Bono and Riki bringing up some of their favorite locations to go on the calendar, which includes Austin, Monaco, Singapore, Budapest, and a few others. And shortly after this, with Bono saying to the camera ‘it’s hammertime’, the episode drew to a close.

Here’s the full episode from Mercedes: