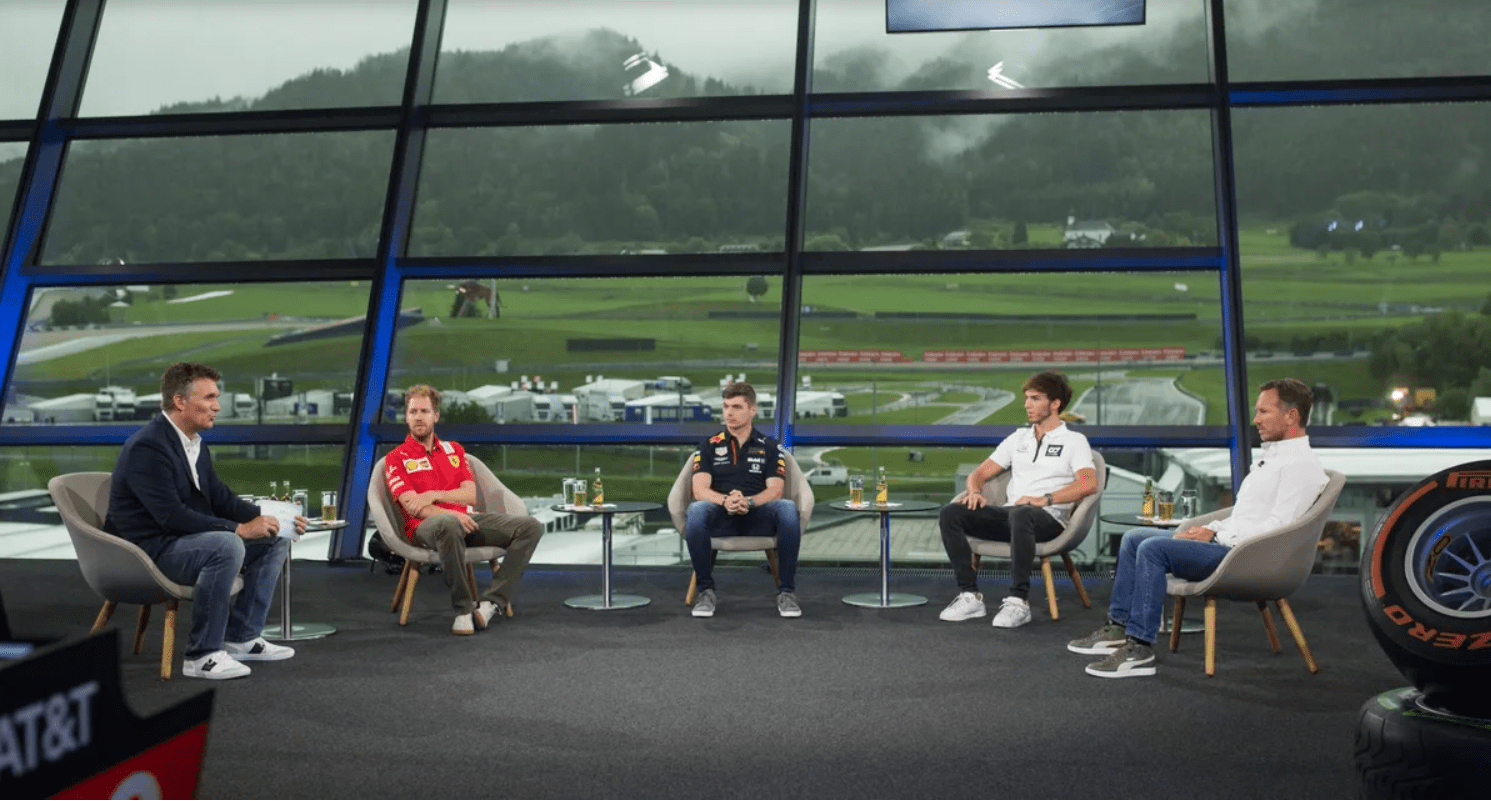 It was not the first appearance for any of the participants where only Gasly and Horner conversed in English, while Vettel and Verstappen spoke in German. The show went live on ServusTV from the Red Bull Ring circuit with audience in attendance too.

The chat featured whole lot of topics. First up, we sum up what Vettel spoke:

Vettel: “I didn’t sleep so well last night, but since I spend the time between the races here, I used the sunshine today and went up the mountain to clear my mind. It was good to be out in the fresh air, I was alone and that felt good in that situation.

“Generally the speed was missing and we are still looking at it. There are two or three things that were not quite ideal. The car was not recognizable compared to the feeling I had on Friday. That is why it was a difficult day for me.

“It wasn’t supposed to be an attack, I just wanted to be close. Charles/Carlos fought and I didn’t expect Carlos to close the door. It was my fault. We didn’t touch. For not having a handbrake, I did a good job. I didn’t do it on purpose. Spin the car like that.

“Of course spins can’t happen, I was also very angry about it. It is an absolute no-go and without it, I would have had a much better chance. I also had new soft tyres that would have helped me at the end. That’s why I was angry too.

“Nevertheless I had an entertaining race at the end, with Daniil, an Alfa and also with Alex at some point. Also, you have to acknowledge Charles’ performance, he drove a very good race. I am the first to recognize the performance of others.

“The car is not as strong as we have hoped for this year. Let’s see how long the season will be. We are for sure not where we want to be. The team works hard and if we are lucky, we are getting some parts of the upgrade this week.”

On Nico Rosberg’s criticism on his driving, Hamilton/Albon incident –

Vettel: “Nico always leans out of the window no matter with whom. Excuse me for saying that. Regarding the incident, I don’t think Lewis wanted to hit Alex but of course it’s his fault. Alex did a good job. It’s not easy to overtake in that corner so he had courage and did everything correctly. I think the penalty was justified.”

On Ferrari decision, doesn’t think COVID-19 was the reason –

Vettel: “I think that the last five years have not brought what the goal was from both sides. But I still think it would have been an option to continue together and work on the goal. That was communicated like that. I was told that they want to continue together.

“Then out of nowhere, I got a phone call, in which I was told that there won’t be any offer, that there would be no future together. As for the decision. the conditions with corona are not so decisive there. There were also partial reports that we could not agree on the financial. That was not an issue at all and wouldn’t have been.

“If you have been here for so long and be so successful & have achieved a certain independence, this would certainly not have been an obstacle. I’ll accept the decision and have no problem with it. Despite that I will continue to fulfill my task and unlike last weekend, do a better job for the team and have a satisfactory closure.”

On future, Red Bull/Mercedes, retirement plus alpine in Austria –

Vettel: “To be honest I didn’t make a decision yet. I don’t know it myself. It’s important to find an environment that suits me. In many aspects I enjoyed the last five years, but the last five years have also taken a lot of energy.

“The target was to rebuild the team, both sides tried their best but at the end we both failed because we didn’t win the title. Now it’s a new situation for me. Important for me is to find something that gives me joy. The financial is not important.

“But I am also competitive. Motorsport is my life. With the right task, right position, I would still feel at home in the car. The next weeks and months will show what is possible and what I will do. I do the contract talks myself.

“You know the people after being in the business for so long. I don’t tell someone else to call Christian etc. We all know each other. I think Mercedes is very satisfied with how they drive atm. I can understand that they want to hold on to it.

“The driver decision hasn’t been made yet, but it’s obvious if Lewis wants to continue, they will and with Bottas after such a weekend like yesterday it’s the same. If you make the decision to close the door, you should not do it if you have hope to open it again, unless it‘s clear from the beginning.

“I think you you need to be willing to keep the door closed, means if it doesn’t open again, you should not regret the decision. And yes, I bought a alpine hut [at the Steiermark]. I visit it once a year. Maybe that will change in the future and I will be there more than once because I will have more free time.”

In addition to the above, Vettel revealed that he will have a new helmet for this weekend’s Styrian GP and also talked about the quarantine time with family. He said he discussed his situation with Dr. Helmut Marko, whom he takes as a close friend. It wasn’t for contract negotiation but the chat was for advice.

The portion with Verstappen can be found here –

. @Max33Verstappen at the #ServusTV show last night, speaking about the first race, quarantine time, whether he would like Sebastian Vettel as his teammate and more!

Elsewhere, Gasly spoke about his drive to seventh after nearly retiring as he added about his lockdown period in Dubai and France. Horner had similar topics thrown at him along with additional ones for Vettel and his future, DAS and more.

On Vettel, if he and Verstappen can work –

Horner: We have so many special memories with Seb. We had an incredible time. If he leaves F1, it would be a loss for F1. We never expected Seb to be on the market, we never expected Ferrari to be so ruthless and not offering him a contract.

“They are both fantastic to work with. We had a fantastic time. We had a great relationship with Vettel and it’s the same with Verstappen now. Albon is also developing very well. Like I said the timing of [Seb being available] is unexpected.

On problem with Verstappen in Austria, DAS clarification –

Horner: “We have now looked at all the parts more closely. We know the problem and now we need to work it out with Honda. I am confident that we will find a solution for all four cars. As for DAS, in our view, it was a grey area.

“Mercedes put forward the argument that DAS is part of the steering system, we found that in this form it is part of the suspension. Ultimately, it serves to warm up the tyres. The technical delegate was also at the hearing in Spielberg.

“Due to the protest on Friday, the topic no longer had any influence on the rest of the weekend. But we definitely wanted clarification before we start the race. On their own work, we put a lot of resources into it. Maybe we are looking for a more extreme solution, now that is allowed.”

For those interested in full video, here you can find it: https://www.servustv.com/videos/aa-1q9e6kx211w11/

Here’s Sebastian Vettel on only one spin

Here’s Pierre Gasly on his outing

Translation and additional input by @Vetteleclerc