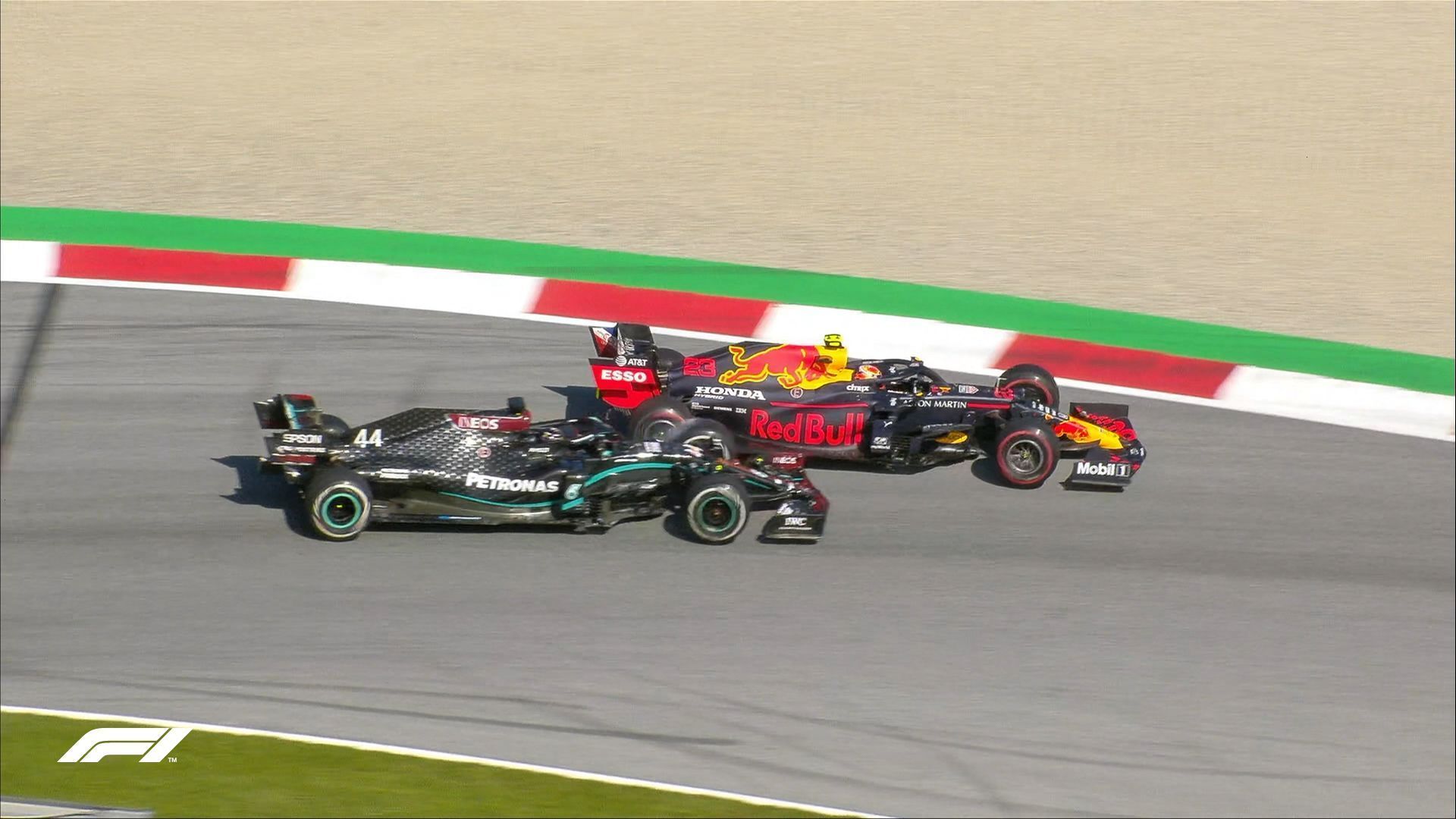 Red Bull Racing’s Alexander Albon and Christian Horner say that F1 win was possible for them as Mercedes’ Lewis Hamilton and Toto Wolff call the Austrian GP penalty as harsh but something they will take it in.

For a moment, it was like back to the 2019 Brazilian GP, where Albon and Hamilton last collided and the Thai racer missed a F1 podium chance. With only one race between that and this weekend’s Austrian GP, it still remains fresh on the minds of everyone.

It only took few laps for Albon and Hamilton to re-kindle their tussle as the latter was chasing the former for a place on the podium early on. It was the same corner where the Brit had to back-off slightly, so that he didn’t hit the Thai racer.

And nearly 50 laps later, the two were together again while battling for the race win at the same corner. Hamilton was ahead this time on an used hard compound while Albon was on a fresher soft compound, looking menacing to take both the Mercedes F1 drivers.

He succeeded too as he went around the outside of Hamilton at Turn 3 and had his car ahead almost when front-left of the Brit collided with the right-rear, sending him into a spin as he dropped to the back and eventually retired to score nothing.

This came after teammate Max Verstappen retired due to electrical issues. Albon was visibly disappointed and felt that he had the move done while already setting his eyes on Valtteri Bottas. He added that he will speak to Hamilton once he has cooled down.

“I am a bit fresh right now so I have got to be careful with what I say,” said Albon. “It is what it is. I really felt like we could have won that race. Of course Mercedes had the outright pace today, but the guys did a great job with strategy.

“When I did the pitstop, I didn’t know where we were on track or what was going on. As soon as it all played out, it looked really strong for us. I knew basically that they were on the hard tyres and the first five laps of the stint was when I was going to do the overtakes.

“I was confident and the car was feeling good in the last stage of the race and just what it is. I feel like this one, I wouldn’t say hurts more, but I felt like Brazil was a bit more 50/50. This one, I felt like I did the move already, and I was already focussing on Bottas.

“It was so late, the contact. I think there is always a risk of overtaking on the outside, but I gave it as much space as I really could. I was right on the edge and I knew as long as I gave all the space I could give to him it is up to him if he wants to crash or not.

“I’ll cool off and I’ll come back to meet Hamilton,” summed up Albon. It was a big chance for the Thai racer to put himself in contention with a possible maiden F1 victory but for the incident, something Red Bull chief Horner thought about as well.

“Alex drove a good race, he didn’t deserve, five seconds doesn’t feel…like it doesn’t do anything for him but he could have won the race, strategically we have made the right call, got onto the soft tyres and he was in a strong position,” said Horner.

“It is a very similar incident [to Brazil and earlier in the Austrian GP], Alex squeezed him and gave enough space at the start of the race. You can say that, that he should have been patient. But he got the job done, the pass was made, it wasn’t like it was in the entry or whatever, so what overtake is safe at the end of the day.

“I doubt Lewis is going to wave him past like that. We had to use the grip advantage and the grip is in the corners, he done that and it was just a mis-judgement from Lewis at the end of the day and it will be good if would apologise for it,” summed up Horner.

Adding about the retirement cause for Albon, Horner stated it was related to the Honda power unit, which the Japanese manufacturer is still investigating. Summing up the Austrian GP, the Brit thought it was ‘brutal’ for Red Bull with zero points.

“Coming out with zero points having been position to challenge for a victory with both drivers in what is going to be a shortened season, it feels pretty brutal, because we got the tyre call right there with Max and with Alex for a second chance,” said Horner.

“Mercedes were very quick in that first stint but then they turned the engine down after the first stop and as soon as they did that, they came into out area of straightline speed and Max on the different strategy could have really played out well. The positives are that we were able to put together a competitive race but we have to find some pace still.”

On the other hand, the Mercedes duo kept it short where Hamilton thought it was a racing incident, something Wolff felt annoyed too. The Austrian added that the five seconds time penalty was harsh – which dropped the Brit to fourth – but they will take it to the chin.

“I don’t really feel any way particularly right now,” said Hamilton. “The race is done and I just feel like moving forwards. Of course, its not been a great weekend for me. Yesterday was entirely my fault, today, it was a bit odd to get a penalty during preparations but it is what it is and that didn’t destabilise me.

“It encouraged me to go out and drive as best I could, and I feel like I did. I had great pace to catch up with Valtteri, and then a really unfortunate scenario with Alex. I can’t believe we’ve come together again, but it really felt like a racing incident. But either way, I’ll take whatever penalty they feel I deserve and move forwards.”

Wolf added: “The stewards are always in a difficult position to take the right decisions. I think today was a bad day for Lewis and a bad day for the team. Obviously the three grid position penalty that he got in the morning with Red Bull digging out a different camera angle, but you have to take it on the chin, it is what it is.

“Then in the race, I would definitely say, from my perspective, the five seconds were too harsh. We looked at the video now a couple of times. Lewis was having full lock in the corner. Albon had about 40% of the road left to make the corner.

“Different to lap one, where Lewis had to back out of Albon pushing Lewis. So in my opinion, not justified, but I recognise the complexity of the job, of coming up with the right decisions. Some go for you, some go against you.”

Chilled out Sunday in the sofa so here’s my take on the @alex_albon vs @LewisHamilton incident after some analysing and thinking. Not a easy one, let me know what you think! #F1 #AustriaGP pic.twitter.com/TO6Aq4WyOk