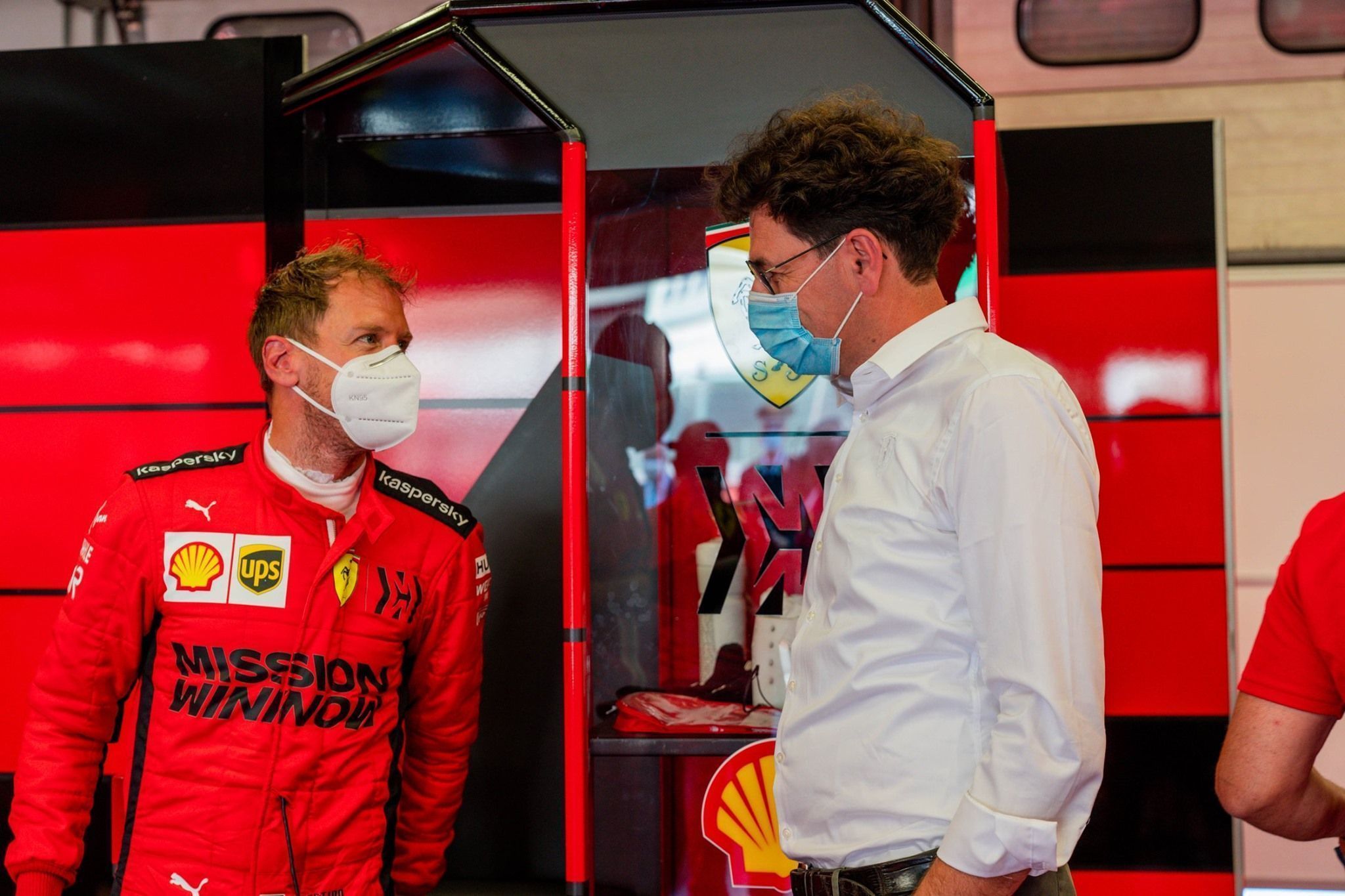 Mattia Binotto has explained the decision to not retain Sebastian Vettel beyond 2020 F1 season with Scuderia Ferrari as COVID-19 pandemic disrupted their plans as Mercedes’ Lewis Hamilton shuts up media reports of his contract.

On Thursday, Vettel surprised the media and alike, revealing that Ferrari did not offer him a contract despite the talks about extension. Since last year to Australia, Binotto had said that the German remains their first choice for 2021 F1 season and beyond.

His only interview in April also had Vettel talking about extension with Ferrari. However, things changed for him in May when Binotto called him up to explain the new situation. For media and everyone else, it didn’t come into light until June.

There were multiple reports of offers and refusals but with with Vettel stating that there was no contract in the first place, it puts down all those stories. Post the signing of Carlos Sainz, McLaren’s Zak Brown revealed of talks since December 2019.

Binotto agreed that there were talks with multiple F1 drivers between last season and the official signing but he stated that it is usual situation when a seat is available. The Italian, though, added that the decision changed due to the whole pandemic situation.

“We always said during the winter time, privately to him and publicly, that he would have been our first choice, which I confirmed,” Binotto was quoted as during the Friday team press conference.

“It’s normal that during winter time many drivers have asked us if there were any opportunity to drive put for Ferrari. So we have certainly been contacted. But that didn’t change our position. So Seb was our first choice.

“What happened since then? I think virus, the pandemic situation which changed the entire the world. The budget cap has been changed by quite a lot, it’s a lot more strict. Regulations have been postponed from ’21 to ’22 which was something important for us.

“Cars have been almost frozen for 2020 and 2021. So let’s say that the entire situation has changed. And on top of that I think that even the season has not started. So there have been no opportunity even for Seb being back on track to prove how much he was really motivated somehow to drive for Ferrari, which has been somehow unfortunate for him.

“So during the shutdown, as Ferrari, we had to consider eventually our position. We took a decision, so certainly that was our decision, that is our responsibility. And we communicated to him. Do I remember that he was surprised? I would say yes, certainly.

“I think that I understand it, it’s pretty, let me say, normal to be surprised. I think that while he accepted our decision, I think that even still today he’s not fully happy with it, which is again, I think something which is normal and obvious,” summed up Binotto.

Adding more on the time spent with Vettel, Binotto added: “I think it has been a great period, five years so far, six with the current season. He’s a great champion, but he’s as well a great person.

“I think that everybody in Ferrari, our fans, the people working internally, really love the time with him. I think that’s something we fully respect. I personally respect him a lot, him as a professional and as person, and I think that is fully unchanged compared to our decision.”

While the Ferrari news surprised many, on the other side, Hamilton has pulled up media reports regarding his high ‘demands’ for a salary for his new F1 contract. The Brit took to Instagram to deny any of it, adding that talks haven’t even started yet.

“Morning! So media keep writing about contract and me making demands but I haven’t even spoken with Toto about it yet. No demands, the conversation hasn’t even begun. So please stop making shit up,” wrote Hamilton.

Here’s Lewis Hamilton on his stance and Sunday unity show