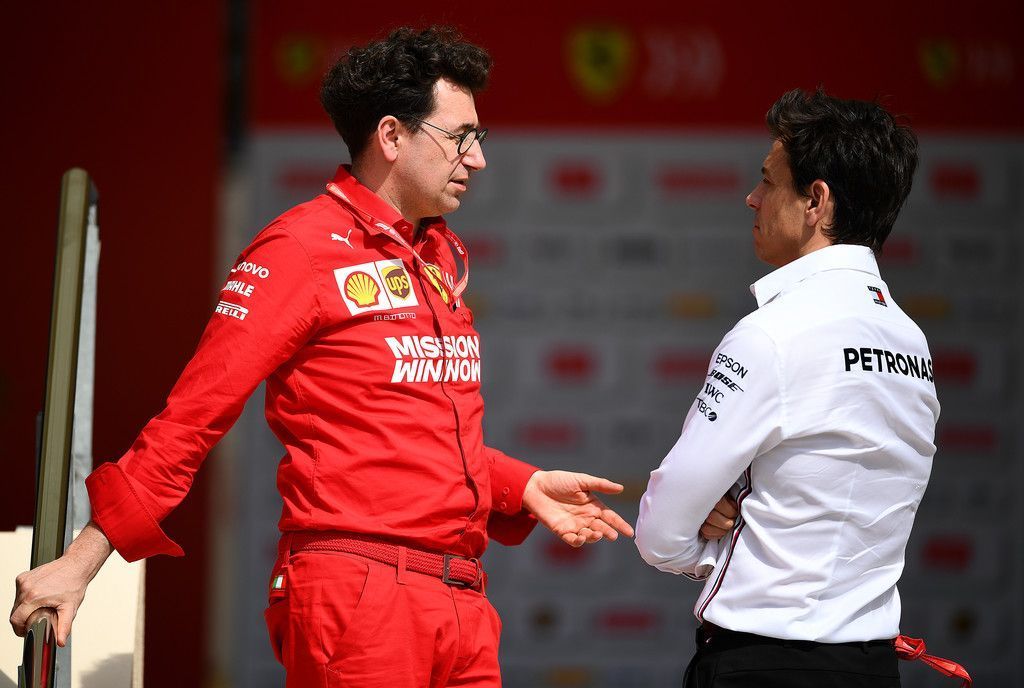 Mercedes’ Toto Wolff had a different tone as he showed tiredness regarding the whole Mattia Binotto/Ferrari aero/engine talks as Top 3 reflected/predicted outcome of F1 Austrian GP.

Just as the Friday practice day was eventful with the Red Bull-DAS protest saga, Saturday had countless surprises as well, one of which can be credited to Ferrari, who had previously warned that they’ll be off the pace at Austria, but were even worse than anticipated.

There was much talk on the topic and ultimately the F1 team came a depressing seventh and 11th in Austrian GP qualifying – something no one could have guessed. Mercedes’ Wolff, though was seemingly fed up with all the discussions.

The last few years has seen Binotto and Ferrari discuss the weaknesses pertaining to aerodynamics and engine, with last year’s whole behind the scenes protest situation damaging the atmosphere along with the deal with the FIA.

Coming to the Red Bull Ring circuit, it does need engine power to extract better performance and all of the Ferrari-powered car suffered with only one making it to Q3, two in Q2 while three got eliminated in Q1 – which once again flared the power deficit topic.

In current circumstances, it can only be an assumption as it is not possible to be 100 percent certain as a F1 car is complex game. Wolff seemed tired, though, as he broke the diplomatic chain and was quite candid with media like The Race, Racefans.net, Motorsport Network and other European pack.

When asked about cheering up Binotto, Wolff was blunt to state: “Um… The right question at the beginning. I’d like to cheer everybody up at Ferrari, because this is a fantastic company with fantastic people, but I have no reasons to cheer Mattia up.

“Is it enough for you as an answer?” When pressed on the engine situation, Wolff added: “I don’t want to comment on this. I think enough has been said. I don’t want to talk about Ferrari. This is more about the way things are being managed. Let’s not go back there.

“I think everything has been said back and forth. They haven’t shown great performance today. We want them to be competitive and race with us, race under the same rules, and nothing would make me more happy if we had three or four teams being competitive out there, and giving us a run for our money.”

Regarding Ferrari playing down their pace both in straightline and corners and if component freeze has pushed them down, Wolff stated: “Not they have talked it down, but Mattia has talked it down. I can’t listen to that any more. As for freeze, I don’t know.

“I have no insight in what Ferrari, where Ferrari’s development stands. Of course with the new regulations you are only able to introduce reliability upgrades, so normally a great performance jump is not to be expected, because that is what the regs say.

“But again I want to reiterate that we respect Ferrari a lot. We want them to be fighting with us on the track. There are great people there, and we need Formula 1 and Mercedes, we all need the competition,” summed up Wolff.

Wolff has mostly remained calm in his briefs but the above seemed different. Interestingly, Red Bull’s Helmut Marko also did not wish to add on Ferrari engine situation, similar to Max Verstappen – who chose to avoid after his troubles last year.

“I guess you have to ask Ferrari about that! The engineers. I don’t know, I’m driving with the Honda-powered car so I have no information why that is.” The Mercedes pair were surprised as well with Lewis Hamilton adding: “Not expecting them to be that far behind but, as Max said, I don’t know what their reasons are, so.”

Meanwhile, Ferrari, themselves are only coming to terms with how the F1 Austrian GP qualifying turned out to be. They had low expectations already from the first two rounds but Charles Leclerc added that his team is far worse off than initially expected.

“Unfortunately this is where we are at the moment, so we need to work and start building a better car for the future,” said Leclerc. “We cannot get demoralised by the result but it is not what we were expecting, we’re not even close to where we expected to be.

“But we have to keep on working as a team, to try and find improvements in every single detail, as that can make a big difference, seeing how closely packed we all are. It’s tomorrow that we can score points. We’re not expecting miracles, they won’t come for sure, but we’ll do the best we can with what we have and continue to work the best we can for the coming races.

“There’s the possibility to do better than today but the Mercedes are out of our reach. “We’ll give it our all, as drivers and as a team, and we’ll try to get as far up the order as possible.” For Sebastian Vettel, it was all-the-more depressing with a Q3 miss.

The German had no answers but remained optimistic about the grand prix where he reckons they are quicker than McLaren, while they will have to fight it out with Racing Point. “Surprised,” started Vettel. “I thought that we had a little bit more in hand but it looks like the others were probably running a little bit more fuel or more conservative in practice.

“I wasn’t quite happy with the car… more oversteer on entry than I would like, but we’ll see. I think tomorrow is a different picture. Maybe with the track getting a bit hotter, it was a bit more costly for us today.” Ferrari already stated that they have a large upgrade lined-up for Hungary event and so it remains to be seen how far they can get through.

While they struggled, their immediate F1 rivals had a sound run as Mercedes secured another 1-2, where Valtteri Bottas managed to out-qualify teammate Lewis Hamilton. He snatched pole despite having to abandon his last lap.

Reflecting on the success in the press conference after qualifying, Bottas was justifiably bubbly as he stated Mercedes were in their own league. “It feels really good,” said the Finn. “I’ve missed these feelings, y’know, after the qualifying. It’s something special, when you push the car to the limit.

“Obviously been preparing for this for a long time and it feels so good. Can’t say more than that. Our team, amazing job. We seem to be in our own league,” said Bottas, who added that he feels he unlocked extra performance resulting in his incredible result.

“I finally managed to unlock some performance from myself and from the car for the qualifying,” he added. “There were certain corners that I sometimes got them right but mostly I was just a bit off.

“Just throughout the qualifying I managed to build the confidence and found the areas that I was missing and managed to get some good laps and put the pieces together. I think there was a bit more time on the table. I think I was slightly up on my second lap until I ran a bit wide in Turn Four on the gravel and went off the track.”

Looking to the race, Bottas is not taking anything lightly. Even though Verstappen is on a different strategy, the Finn is mindful of the situation with him and also Hamilton, who just missed out by a tiny 0.012s margin. The Brit – seeking his seventh championship – was, however, investigated for ignoring yellow flags, and going off-track.

No action was taken against him on the former but his first Q3 lap was deleted for the latter. On qualifying, Hamilton also spoke on the team’s overall dominance, and how much this speaks to the work put in behind the scenes.

“We definitely didn’t expect to have that gap but it’s just a true showing of all the great work everyone back at the factory continues to do,” said Hamilton. “We thought we were definitely quick enough to be fighting for the lead – but there were different showings from the other teams: sometimes quick, sometimes a little bit further behind.”

Behind Mercedes with a gap of roughly half of a second was Verstappen. The Dutchman was tipped as a favorite heading into the weekend, but the pace of Mercedes appears almost too great to overcome. Crucially, though, he will be on an opposing strategy.

“I’m happy first of all to be P3 but also yeah, we have a different starting tyre,” said Verstappen. “It’s going to be interesting; it’s going to be quite a bit warmer, so I hope that’s going to play in our advantage – but clearly Mercedes was on a different level unfortunately. I was not entirely happy with the balance.

“Some corners were good, some were not, so then the gap can be a bit bigger. But still I think, yeah, half a second is quite a decent gap. What can you say about it? We just need to work harder and try to close that. Last year we were also a little off in qualifying so I expect we are a bit better in the race.

“Now, I’m the only one on a different tyre in the top ten, so yeah, I’m just looking forward to it. We have nothing to lose, so I’ll try to make it as difficult as possible for them.” Teammate Alexander Albon felt fine as well despite losing to McLaren’s Lando Norris.

The Thai was on the older spec front wing to Verstappen with Red Bull opting to give the new one to the Dutchman, even though he broke his in FP1. Albon was fine with the decision and felt more pace is to be shown in the race.