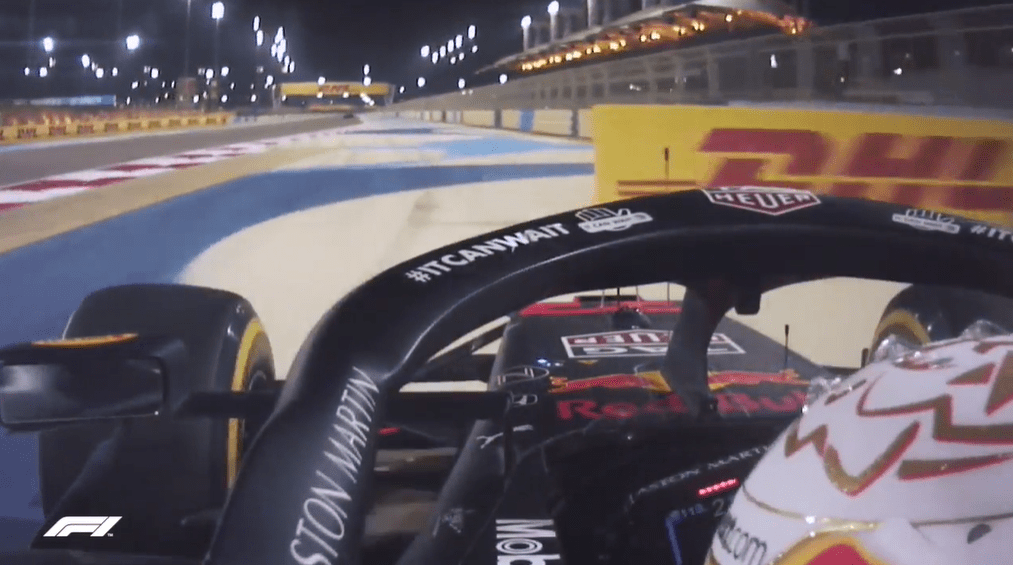 Max Verstappen has clarified his post-race comments as Romain Grosjean has spoken more on the F1 Bahrain GP crash plus return.

The comments from Verstappen post the F1 Bahrain GP caused some stir, when the Dutchman joked that, if he was to be a team boss, he wouldn’t keep a driver, who says no to driving after looking at an incident like that of Haas’ Grosjean.

Both he and Mercedes’ Lewis Hamilton answered to a question, where they were asked if F1 drivers should be given the liberty to decide if they wish to compete or not. The Brit put the onus on the FIA to decide if it is safe, as Verstappen then followed up.

Here’s the full exchange between the two:

Hamilton: “I don’t think so. We’re not the safety regulators. We’re here to do a job and we rely on the FIA who are aware of safety and we trust them implicitly so no, I do not think so.”

Verstappen: “Yeah, they get why you win the race. We’d be the team boss, I would kick him out of the seat.”

Verstappen: “If the guy wouldn’t race and I would be the team boss, I would tell him then you never sit in the seat again. Yeah.” – smiles

Hamilton: “I hope you’re not my team boss.” – smiles

Verstappen: “I hope I will never be a team boss anyway.” – laughs

Hamilton: “I feel sorry for anyone who is going to be your driver in the future.” – smiles

While there was not a huge public furor but fans and alike showed some resentment, which is why Verstappen clarified his stance ahead of this weekend’s F1 Sakhir GP. “I think people misunderstood what I meant,” started the Dutchman.

“What I was trying to say is that as drivers we know the risks when we get in the car and if anyone has doubts they should consider stopping racing. There is nothing wrong with that if you feel uncomfortable to race but we are part of a team and they rely on us to do our job which is drive the car.

“Had Romain not walked away obviously things would have been very different on Sunday.  I think back in the 60s and 70s it was way more dangerous and the drivers of that era were still going out on track because they knew it was their job and that’s what they loved to do, even though they knew the risk was very high of losing their friends around them.

“The safety in place now is incredible and I respect everyone’s own decisions but that is how I feel. Nobody ever wants to see an accident like that but all that really matters is that Romain is ok,” summed up Verstappen, who looks to be in a good spot this weekend with Hamilton not around.

Last weekend, it was a miss from Verstappen and Red Bull as the Dutchman felt the team could have done a better job with the strategy, especially the first time, when they allowed Hamilton to pit before him. He added that there would be discussions to see what was the reasoning to not stop before. His second stop, as well, was slow.

Moving on, meanwhile, it can be understood that everyone had Grosjean on their mind but there were several key misses on the f1 world feed, whether it was a spin from Sebastian Vettel and or three-tyre stop for Valtteri Bottas. There was a miss for Verstappen too.

F1 uploaded a video showcasing that Verstappen hit a DHL board on one of his laps, which fortunately, did not damage the right-side of his front wing. He had a moment in the left-hander which resulted in the hit. Here’s the video: https://www.formula1.com/en/video/2020/11/2020_Bahrain_Grand_Prix__Verstappen_hits_DHL_advertising_board.html

Going back to Grosjean, the Frenchman was released from the hospital and caught up with Kevin Magnussen at their hotel. He has been speaking with French media all along and the latest interviews had him elaborate more on the crash and future decision.

In the three days, Grosjean has watched the incident as he talks about his deflection to the right seeing a debris on his left. He says he looked at his mirror and saw no one but AlphaTauri’s Daniil Kvyat was there, whom he eventually hit.

“It’s going too fast, I didn’t know I had touched Kvyat because I hadn’t seen him,” said Grosjean to Le Quipe. “I was annoyed to have cut him off the track, he was in my blind spot from the exit of Turn 1 at impact. I looked twice in the mirror: I was out of the bend faster than the others, there was debris on the left, so I put myself on the right.

“For me, there was nobody, that’s why I fell back at that time but there was Kvyat. The shock is subtle. Then there is the impact with the barrier; I didn’t feel it violent with the car. I closed my eyes. When I opened my eyes, I took off my harness and I think the halo blocked me and so I sat down and I told myself that someone will come and help me.

“At that moment, I didn’t realise that there is fire. Then I looked to the left: it was all orange, I found it weird. I understand that it burns because the plastic of my “tear off” caught fire. I tried to get out without success and I thought I will end up like Niki Lauda, ​​badly burned but I told myself that it is not possible, that I cannot end like this.

“I tried again and was still stuck. I sat down again and there, strange moment when I see death as close as we can see it. I wondered which part was going to burn first, and if it was going to hurt. I took 53G in my head so obviously I was a little stunned. But then I pulled myself like crazy because my left foot is stuck under the pedal.

“I told myself that I haven’t tried to slip on the other side yet: I put my hands in the fire, the gloves turned all black, I felt the pain, I know then that I am burning my hands. When the bust passes, it’s deliverance, I know I’m going to live. I passed the barrier, I felt the doctor pulling on my suit. He said to me ‘sit down’.

“I took off the gloves and yelled at him because he talks to me like a badger. I don’t know if it’s natural, but the survival instinct was the strongest. For me, everything has been mastered: even after thinking that I was going to die, I had the lucidity to think about the movement to be made. I was well aware that I was putting my hands in the fire, but it was the solution to live,” summed up Grosjean.

The major trouble for Grosjean was that his kids and relatives were watching the grand prix on TV. He noted that FIA President Jean Todt was quick to let him speak with Marion, who broke down, upon hearing the news. It was hard on them, watching live, especially.

With him missing this weekend’s Sakhir GP – where Pietro Fittipaldi will take his place – Grosjean is aiming as much to return in Abu Dhabi, which he has already conveyed it to his family, something which wasn’t easy for him and or for them.

“When I got to the medical center, I started to feel a little sore, especially on the foot. I started to shake from the pain. Jean Todt asked me for the number of my wife, one of the few that I know by heart. He was amazing, he called several times and then managed to reach her. He put on the speaker and I said, ‘Mosquito, it’s me’.

“She burst out laughing and then broke down. I saw death too closely, it’s a feeling that I don’t wish on anyone. It will change my life forever. At that time, I wasn’t scared, I wasn’t upset but I didn’t want it to end like this. I swore, ‘F**k, it can’t end like this’. I had no trouble viewing the footage of the accident.

“I want to see the camera in the car which is apparently impressive. I was told that I remained Olympian calm. After the accident, the hardest part was for my wife and my children. I put myself in their shoes: my children saw it live in front of the TV, like my relatives. I was more afraid for them. For me, there will be a post-traumatic shock.

“I actually started working Tuesday evening with my psychologist. But my desire, immediately, was to get back into an F1. I thought of Abu Dhabi and told my wife that ‘Sorry Marion, but I need it for myself: to know if I can do it, to know what I’m going to feel, how I’m going to react and that I can’t wait without knowing’.

“I have to do everything to try to get back in the car. If the doctors tell me that is not possible, I will listen to them but I must try to go back up. I must be selfish. If my left hand doesn’t work next week and I’m not able to do everything I have to do with it, I won’t take a risk and drive.

“But I’m trying to rest as much as I can and follow the doctors’ recommendations so that it heals. First, it needs to become less swollen, because it’s very swollen at the moment. There may have been an impact on the thumb’s ligament during the crash. My whole left side was hit. My left ankle is sprained, my left knee was hit, and I’ve got nice bruises on my left shoulder, my left buttock and my left forearm.

“I think my left thumb wasn’t spared either. Not only this hand is more badly burnt, but my thumb is slightly sprained. I’ve got strength and I can move it in many ways. I can close my fist. However, I can’t touch my little finger yet. I would normally be able to [but I can’t at the moment] because it’s inflamed and there’s a big bandage too,” summed up Grosjean, as he noted his left hand to be the major issue for him.

Grosjean added that he was able to walk a bit and that he takes paracetamol to fight the pain. He also revealed that fellow GPDA Director Sebastian Vettel already visited him on Monday morning and they spoke about enhanced safety. Even with Todt, they discussed about the whole incident and what worked, what didn’t.

“Jean asked me to go see the FIA, to work with them. With Vettel, we said to ourselves that we need to have trained commissioners, perhaps the same everywhere. The one who saved me is a professional military firefighter. This gentleman knew exactly what he was doing and saved me. I didn’t think about snorkeling because I didn’t know I was in the fire so I was breathing normally. I’m not even sure if I can last 28 seconds in the pool anyway,” summed up Grosjean.