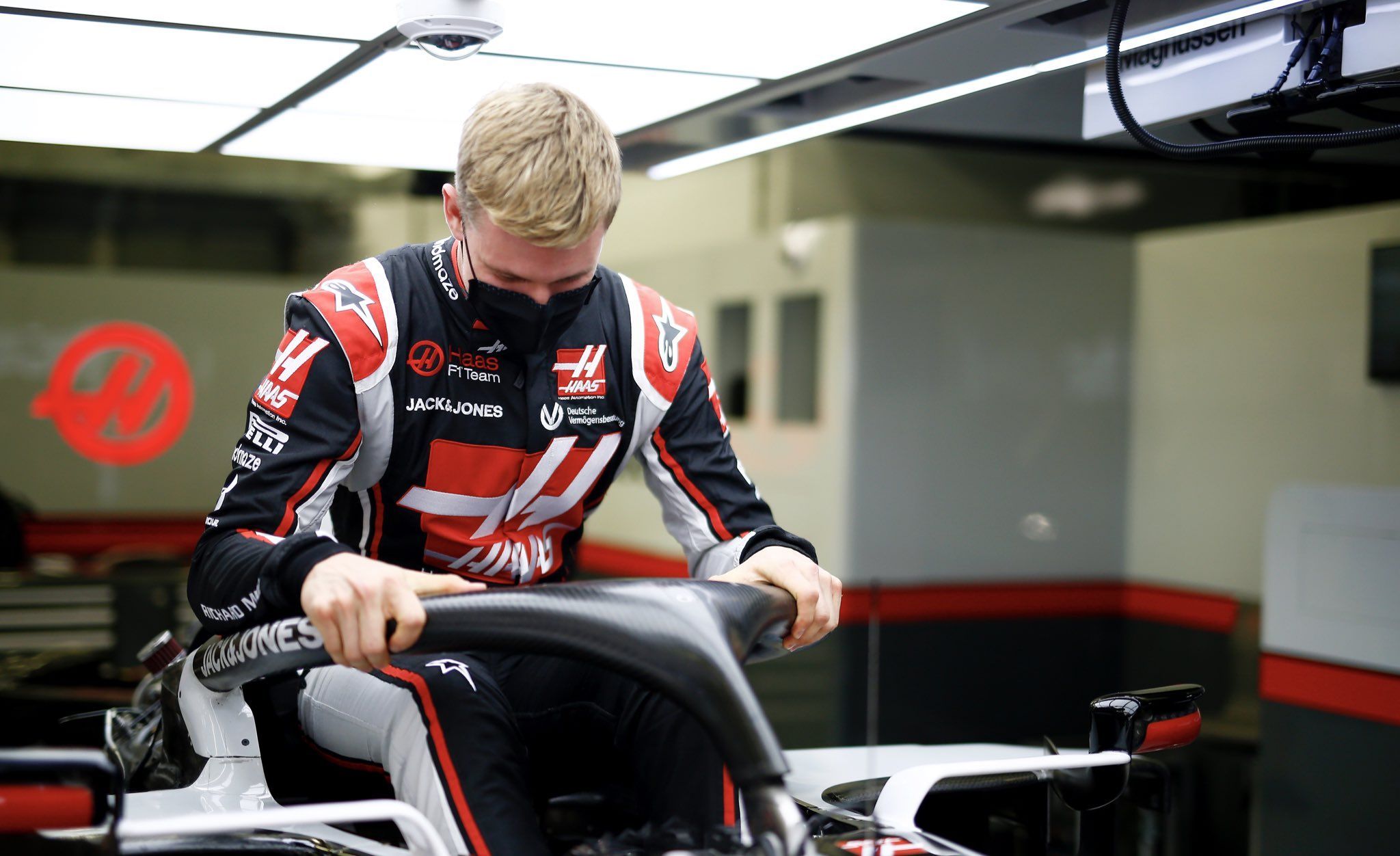 The opening segment in the latest F1 Nation episode was one of reflection on Romain Grosjean’s horrific crash in his Haas VF-20 at the Bahrain GP. One host, Tom Clarkson, said that he was left in disbelief by the fire upon impact, last seen with Gerhard Berger in 1989.

The other host, Alex Jacques, discussed what it was like for him to commentate on the accident for F1 TV, before both hosts expressed gratitude for the Frenchman’s miraculous survival – which they feel was made possible by the introduction of the halo, and another criticized safety feature from the 2000s, the HANS device.

Following this theme, the guests to subsequently join the episode were FIA medical car team members Dr. Ian Roberts and Alan Van Der Merwe, both of whom were praised for their heroism in helping Grosjean out of the flames.

Van der Merwe and Roberts said that preparation guided their decisions, with the latter discussing the scene on which they arrived, and their reaction upon seeing the halved Haas F1 car. After being asked why he chose to get into this job, Van der Merwe candidly said that he did not seek out the position, while Roberts told of his journey before the two recapped what lessons can be learned from the crash.

After the interview concluded, the hosts discussed the “operationally brilliant” team of McLaren, who they both feel has extracted the most of all those in the tight fight for P3 in the constructor’s championship. Subsequently, its technical head James Key joined the show to discuss that same P3 battle, evaluating his team’s performance in the battle, and how they are approaching upcoming rounds in Sakhir and Abu Dhabi.

Key went on to discuss how Lando Norris has improved upon an astonishing rookie year, becoming a “more rounded driver” in his sophomore year, which began, he says, with his best race of the season in Austria. After covering this, Key attempted to evaluate the impact Carlos Sainz’s departure.

A comment mentioning Key’s past working with Daniel Ricciardo reminded Clarkson of this fact, and the Brit asked Key about the Australian – who he considers to be part of an ‘upper echelon’ of drivers – and what he expects from him in 2021. Key finally spoke on McLaren’s work with Mercedes, who will be providing the team power units from next year.

He says that COVID-19 has meant that their development schedule became delayed slightly, but that they continue to work closely with the German manufacturer. After further discussion on Pietro Fittipaldi’s Sakhir debut, the episode ended.

Here is the link to the podcast as FOM prohibits embedding: https://audioboom.com/posts/7740902-all-our-worst-case-scenarios-at-once-dr-ian-roberts-and-alan-van-der-merwe-on-facing-grosjean-s

Here’s F1 Beyond The Grid Podcast having Lord Hesketh

In a good news, Haas confirmed that Grosjean has left the hospital, after spending three nights. Even though he doesn’t needs to sport a full bandage, he will still need some of it as he recovers from the burns. He won’t be racing this weekend in F1 Sakhir GP.

But he is intending to be back for Abu Dhabi GP, which will be his last-ever grand prix in F1 – for now. In Sakhir GP, Pietro Fittipaldi will be driving alongside Kevin Magnussen in the #51 car. Here’s first reactions from the Frenchman: https://formularapida.net/grosjean-relays-close-shave-with-death-kids-reaction-bianchis-blessing/

My right hand this morning. The happiness I had when I was told that I didn't need the full dressing anymore and could use my finger was huge. Almost cried. A victory on my way to recovery pic.twitter.com/QuZojM1mZe

Having being confirmed to make his F1 debut in 2021 with Haas alongside fellow F2 rival Nikita Mazepin, Schumacher discussed about the challenges he has in front of him, as the famous surname returns to the grid after the void left by his father.

Schumacher revealed that his racer number in 2021 will be #47. He wanted to use either 4 or 7 but it is held by Lando Norris and Kimi Raikkonen. That’s why he opted for 47, which was last used by Stoffel Vandoorne for his F1 debut in 2016 in Bahrain.

Another reason from Schumacher for taking up #47 was that the birthdates of his family equals to that number, where Michael’s birthday is on January 3, Corinna’s is on March 2, Gina’s is on February 20 and Mick’s is on March 22.

Talking about the Haas deal, Schumacher noted that when he was supposed to drive for Alfa Romeo in Germany, there wasn’t clarity on which team they will go with. It was around Russia that they had more information, where the American outfit became a clear option.

“After the Sochi weekend, we got the news that things are looking good and that is going in the right direction,” said Schumacher to German media. “But it wasn’t a done deal back then. In the end, I didn’t find out so much earlier than you guys did.

“The first people that I called when I received the news was my family. They were very happy for me. We are all looking forward to the upcoming year. I am very excited for the FP1 session next week, being able to work closely with Haas and get to know them more.”

Adding about the things he wished to learn in 2021, he noted that at the moment, he isn’t looking at beating his father’s record or the ones being set by Lewis Hamilton. “I am in the here and now and am looking forward to being an F1 driver next year.

“What the future brings, we have to wait and see.” Schumacher also spoke about the possibility of making his F1 debut as early as Abu Dhabi, where he will be driving in the FP1 session. For now, it depends on Grosjean and eventually Haas, who they decide to use.

Elsewhere, it was also noted that Schumacher will remain part of the Ferrari Driver Academy as the Italian manufacturer is looking to provide him the pathway to its F1 outfit, just how Charles Leclerc managed to do so.

Mick has been allowed into the circuit today to complete his seat fit, ready for his drive in Abu Dhabi next week. #HaasF1 pic.twitter.com/Z3PP709bkG

Staying with the Ferrari topic, RM Sotheby’s announced ‘Once in a Millennium’ auction, which will take place online between December 7 and 14 – starting and ending at 5PM CET. It is in line with the 1000th grand prix celebration of the Italian manufacturer.

The prized possession will be the SF1000 show car – in its special livery, which was used during the Tuscan GP at Mugello. It is put in the bracket of 150,000 euros to 200,000 euros, which is the highest in the auction. The other items includes:

“Scuderia Ferrari is unique in being the only team to have taken part in every season of the Formula 1 World Championship,” said Ferrari F1 team boss, Mattia Binotto. “This year it reached the historic milestone of competing in its one thousandth Grand Prix, which was held at the company’s home track of Mugello.

“For the occasion, the cars raced in a special livery, featuring the color used on the first Ferrari car built in Maranello. We chose to commemorate this event by producing two show cars, one of which will be auctioned through RM Sotheby’s, the other will remain with us at Ferrari. It is an amazing opportunity to acquire a piece of history relating to the most successful team in motor racing’s blue riband category.”