With COVID-19 not allowing Perez to travel to Mexico, the Racing Point driver decided to hold a virtual press conference with the reporters and broadcasted it online. While the core discussion remained the same as few days ago but he added a bit more to it.

Red Bull remains his first option and if not, he is ready to take a year off – which his backers are happy with as well, especially Carlos Slim – and possibly return in 2022. In fact, Perez noted of reserve options with ‘big’ teams in 2021 and drive options in 2022 too.

“I already have options to return to F1 in 2022, so it would not be a problem,” said Perez. “But what I want to do, I want to do 100 percent convinced, and today no other category catches my attention [for 2021]. Surely a year will take you away from the competition a bit, but you have to take into account that the rules will change a lot in 2022.

“I think that would not affect me much. In the end, with the experience I have, I would return to F1 and within 200 laps, I would be at my level. We have seen this with other drivers who leave and return the following year. There is this possibility of being a reserve, and I have to discuss it [for 2021]. There’s a chance with one of F1’s biggest teams to be their reserve. But I am not very convinced that I would travel to all races as a reserve.

“There are 23 races, and I will be away from home, from my family, all the time without running. At this point in my career, I would not take it, but it is still under discussion that I can do fewer races. Whenever I am more clear about what will happen to my F1 career, we will talk about it,” summed up Perez, when asked about options.

Additionally, Perez laughed off the suggestions that F1 is becoming a playground of millionaires but admitted that good drivers are losing out certainly. Talking about being a Latino makes it a disadvantage, the Mexican didn’t think so but felt politics is there surely.

On the notion that Max Verstappen did not want Perez in Red Bull, the Mexican didn’t think it was the case. It is more on the team now and they will only confirm their decision post the Abu Dhabi GP. Elsewhere, he also talked about traveling with Grosjean to Bahrain in the same plane when asked about the Sunday’s incident.

As Vettel revealed over the F1 Bahrain GP weekend, the German will be auctioning his special ‘Diversity’ race helmet, which he used in Turkish GP and also in Bahrain. It is his only from the Ferrari collection that he is put up for public.

The auction will start on Thursday at 9:00 (GMT) on his website and will end on December 13 at 15:10 (GMT). Vettel is supporting ‘Children A Chance’ NGO in Uganda, who are helping kids, whether they are orphans, disabled or HIV positive.

The other NGO is Des Sourires Pour Le Togo, which is Swiss based and undertakes social and sustainable projects for children in Togo. Here’s the link to his site, where one can bid for his special race helmet: http://sebastianvettel.de/

Post his dramatic crash in F1 Bahrain GP, it was not only hectic for the fans and everyone watching but also Grosjean’s family, especially his wife Marion and three kids. French TV noted that FIA President Jean Todt connected her with Romain in the medical center.

Later on, Haas F1 boss Guenther Steiner, stated the same that Grosjean was already in touch with his wife via his physio, as Marion posted a special quote late in the night, which went, ‘Once we have said the urgent words, the useful words, to protect our children, the others are missing for us. Fortunately, love shields save super heroes’.

With the night gone, she posted a long message on her Instagram, thanking everyone for all they did during the whole incident. She wrote: “Obviously, I didn’t sleep last night. To be honest, I don’t really know what to write. I just know that it’s good to do it. It has always helped me.

“Anyway, this morning, I’m not going to lie, the words aren’t coming easily. That will make him laugh, he who knows how much I like to talk. He to whom I always write so much. And then I didn’t know what photo to post either. Which image to keep from yesterday? The flames? Him, held by the arms by his saviours? The wreckage of the car?

“I’ve chosen this one, a bit stupidly. Because we’re both wearing the same T-shirt of his GP2 title. The one I still sleep in sometimes. I would have preferred if it to have the word ‘superhero’ on it rather than ‘champion’, but if we have to, we’ll have it custom-made. For the children, because that’s how we explained the inexplicable.

“On Twitter, late [last night], I used useful words, urgent words, to protect them above all. I mentioned the ‘shield of love’ that protected him. Today, I have to find other expressions, come up with other rational phrases, to express the feelings. We will find them together.

“Expressions of gratitude, for the men of the Medical Car. Expressions of friendship, for Jean Todt and his unfailing humanity. Expressions of thanks for you all, who have shown your support, your affection, your kindness which is so precious to us.”

Hollywood actor Ben Stiller reflected on the crash in F1 Bahrain GP too:

This is incredible. So grateful Romain is ok. It’s like the beginning of “Heaven Can Wait” when Warren Beatty jumps up, but for real. https://t.co/qw20ZjpGX1

They were rewarded with exceptional promotion as they proved the preparedness and capability in dealing with such incidents. The HE Interior Minister received them on Monday to reward both in the presence of Chief of Public Security and Director-General of Civil Defence.

The full statement goes: “As part of the directives of  His Royal Highness Prince Salman bin Hamad Al Khalifa, the Crown Prince and Prime Minister, to reward two civil defence personnel for their professional performance during the last round of the Bahrain Grand Prix (Formula 1), His Excellency Interior Minister Shaikh Rashid bin Abdullah Al Khalifa ordered exceptional promotion for the two of them. They have proven the preparedness and capability of police personnel in dealing with sudden accidents.

HE Interior Minister received the two personnel in the presence of Chief of Public Security and Director-General of Civil Defence. He conveyed to them the thanks and appreciation of HRH Crown Prince. He hailed their professionalism in rescuing one of the participants in the race who met with an accident. He also hailed the competency of civil defence personnel for their courage and swift response, expressing best wishes for all in serving the nation.” 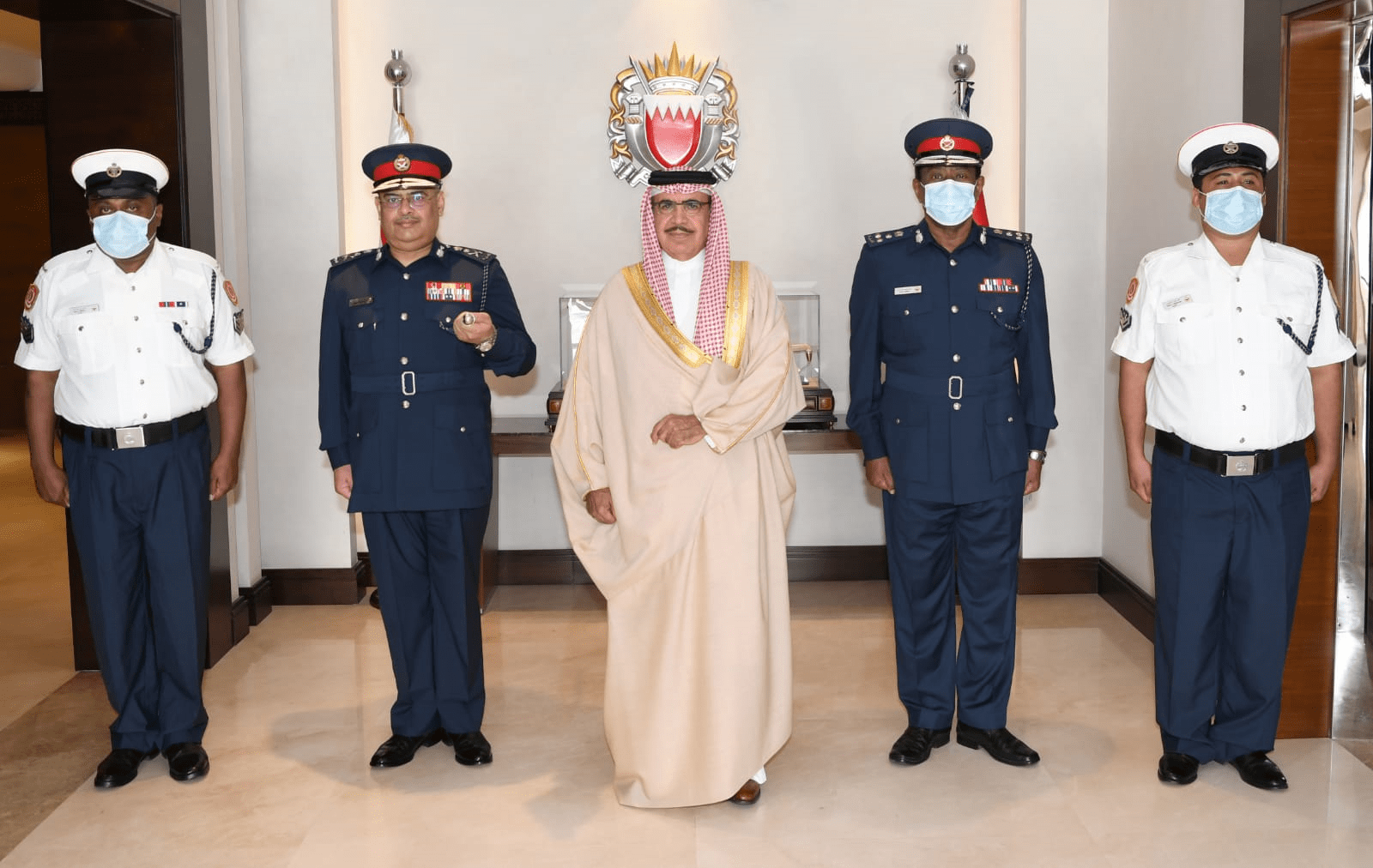