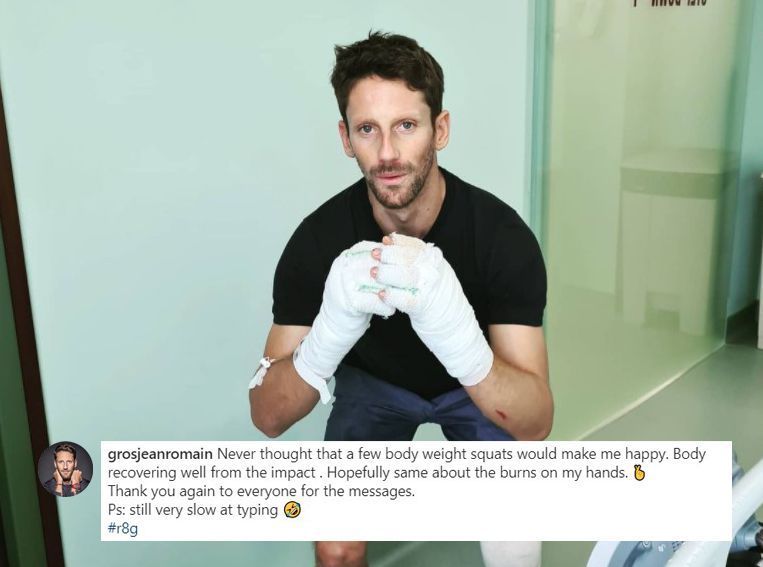 Romain Grosjean has spoken about close-shave with death in F1 Bahrain GP incident as he talks about his kids reaction, Jules Bianchi and more.

It was indeed one of the biggest incidents F1 has seen in current times, especially how the Haas car of Grosjean pierced through the guardrail and caught fire. It was a miraculous save for the Frenchman as he managed to remain conscious and get himself out.

It was still nearly 30 seconds for Grosjean in the raging fire where he admits to seeing death closely, before he managed to escape through it. In his first interview with TF1 and LCI from the hospital, the Frenchman relayed the whole incident.

“It was the biggest crash I have ever seen,” started Grosjean, with a smile on his face. “It was combination of circumstances which went in the right direction for me and I’m not complaining. It wasn’t my time [to die]. Recalling it, I did not lose consciousness all time. To get out of the seat, I was able to remove my seat belt.

“The steering wheel was no longer there, probably flew off during the impact. I saw my visor all orange, the flames around me, and the accident of Niki Lauda came to mind and I didn’t want to end up like that. I couldn’t finish my story in Formula 1 like that. I had to get out of the cockpit, for my children.

“I put my hands in the fire, so I clearly felt it burning on the chassis. I got out, then I felt someone pulling on the suit, so I knew I was out. In the end, my hands were burnt and there was a big sprain. I thought I had broken my foot. Even in Hollywood, a crash like this does not exist. I remained 28 seconds in the flames.

“But it seemed to me much longer, when I was trying to get out of the car three times. After this accident, I’m happy to be alive. I was more afraid for my relatives, my children in the first place, but also my father and my mother, I was not really afraid for myself. I saw death coming, I had no other option but to get out of there,” Grosjean added.

While he is to miss this weekend’s Sakhir GP, where Pietro Fittipaldi will in, Grosjean is itching to return in Abu Dhabi, which will be his final F1 grand prix. He doesn’t want Bahrain GP to be his last and end his career in that manner. He is drawing inspiration from his kids, who are in touch with him.

“I would say that there is a feeling of being happy to be alive, of seeing things differently. But also there is the need to get back in the car, if possible in Abu Dhabi, to finish my story with F1 in a different way,” said Grosjean. “I think there’s going to be some psychological work to be done, because I really saw death coming.

“As for my kids, my eldest, Sacha, who is seven years old, is more rational, he tries to understand. And my little one has drawn a picture, ‘for daddy’s sores on his hands’ and told me that ‘I have magic power, a shield of love which protected me’,” summed up Grosjean, who is to remain in the hospital for another day as he recovers from second degree burns.

He noted of no huge pain but admits that the hand is not pretty to look at. He acknowledged everyone who helped him to be alive, especially the Halo, which eventually did not allow the guardrail to smack onto his helmet – Grosjean felt Bianchi, whose death pushed Halo into the scene, did not wish him to be up there with him.

“Without the halo, I would no longer be there,” said Grosjean. “I think Jules did not want me up there. It was almost like a second birth. To come out of the flames that day is something that will mark my life forever. I have a lot of people who have shown me love and it has touched me a lot, and at times I get a bit teary-eyed.”

Haas F1 boss Guenther Steiner spoke with selected media including Motorsport Network, Racefans.net and co, where the Italian agreed that Grosjean wants to race in Abu Dhabi, but he will only be able to compete if the doctors clears him to do so.

Talking about the incident, Steiner noted that Grosjean did not remember colliding with Daniil Kvyat, before ramming into the barrier. “He remembers how he wanted to get out, or how he got out, he explained that very well to me,” he said.

“What he asked me was, ‘How did I end up there?’ I said, ‘You ran over Kvyat’s car, basically, you turned right and ran over his front wheel, and that turned you around and put you in the wall.’ He said, ‘I didn’t see the car.’ I don’t want to put words in his mouth and say he doesn’t remember it, I think he didn’t realise what he did.

“I wouldn’t say he lost any memory of it. I think it went so quick that he cannot remember it. As for him watching replays, I don’t think he looked a lot at it. Again, I didn’t want to go there and specifically ask him, I didn’t want to put him in that awkward position to say yes or no,” summed up Steiner.

Here’s news on the hire of Nikita Mazepin by Haas