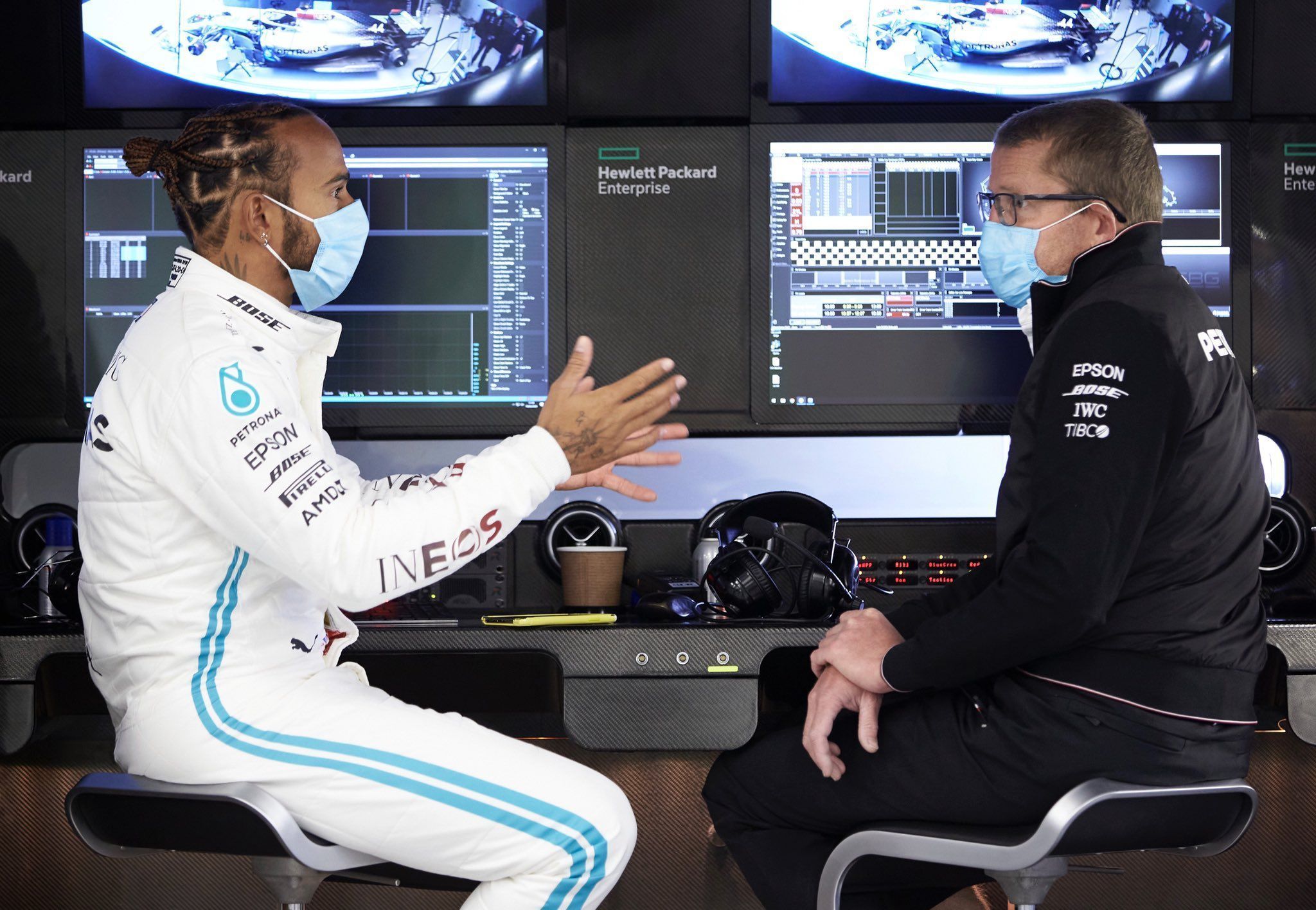 Mercedes completed its two-day F1 test run with Lewis Hamilton getting his time at Silverstone as Ferrari’s Charles Leclerc went down karting in Italy.

After Valtteri Bottas’ run on Tuesday, reigning champion Hamilton had his turn in the Mercedes W09 – his first time in a F1 car as well since the Barcelona tests – on Wednesday at Silverstone. His time ended their two-day run ahead of 2020 start in Austria.

Like how it was with Bottas, Mercedes did not reveal their programme details and focused on sharing photos and videos, whether of the track and or the garages. Hamilton – like the team members – wore a mask as well as per the new protocol laid by F1.

“It was just great to be back in the car,” said Hamilton. “The day was a lot of fun. When you leave the garage the first time, you get this buzz, and it doesn’t matter how many years you do it, it always feels new and fresh. Obviously this is an older car, but it still felt fantastic. We got through a solid programme today.

“Valtteri’s day was dry, my day started of wet, so quite a greasy Silverstone track. But obviously I grew up in this kind of weather, so I’m used to it. I was still able to get a good feel of the car. I didn’t feel like I’ve ever left the water, so that’s a positive.

“I think every time you take a big break – I think it’s been 103 days or something – you always wonder whether you can still drive. So it’s a good feeling to know of course I can, I’m ready, I feel fit. I hope you guys are all well and excited for what’s coming up.”

So far, Mercedes, is the only F1 team to have a track run to prepare for 2020, with Ferrari expected to do the same. McLaren has ruled out testing, while the rest are unlikely to run as well, which surprisingly includes Red Bull Racing.

Some F1 drivers have had time on track with Lando Norris driving a F3 car along with Alexander Albon, while the likes of Kevin Magnussen, Pierre Gasly, Daniil Kvyat, George Russell, Nicholas Latifi and Kimi Raikkonen, have had some kart time.

Joining the karting list was Ferrari’s Leclerc, who had his first run on Wednesday at Lonato in Italy, with his own team, driving a Birel ART machine. The Monegasque is to have another day on Thursday with Antonio Fuoco at his side too.

From the photos and videos, it didn’t seem that much of social protocols was being followed as Leclerc was surrounded by his team along with media (his own and others) and also other racers and their team, who were testing at the venue.

Photos and videos from events:

Catching up with the guys at lunch 🍴😋

Then back out for some more laps and learning! 💪📊 pic.twitter.com/80E7aDlo8k

Anybody else playing this on repeat? 🙌 pic.twitter.com/5gkn6kdeVB

Solid work out there LH! 💪 pic.twitter.com/qLC9LQwmJf

💭 What were the last two days all about?

Here’s the onboard from Charles Leclerc on Twitch: https://www.twitch.tv/charlesleclerc

Here’s the reaction from Valtteri Bottas