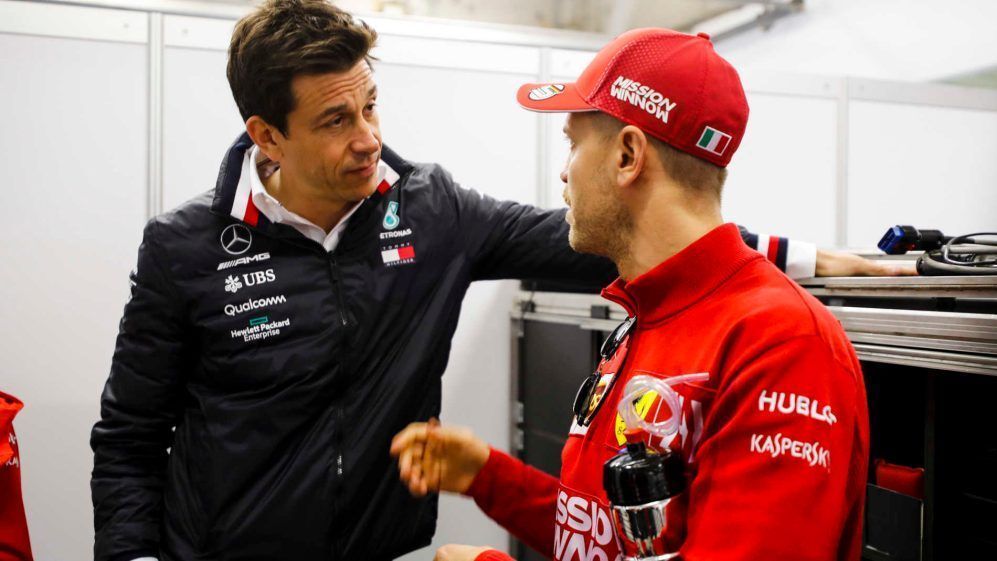 Mercedes F1 Toto Wolff opened up on the chances of Sebastian Vettel and shared his opinion on Lewis Hamilton as he added on why they said no to reverse grid.

Wolff spoke to selected media including F1 official website and Sky Sports, about multiple topics, especially relating to Mercedes line-up with Vettel chance but keeping Hamilton, Valtteri Bottas and George Russell at the top of the list.

He added his bits on what Hamilton has been speaking about, while he explained why Mercedes opted out of the now-old gimmick of reverse-grid races, which has been rejected multiple times by the F1 outfits in the past.

Wolff: “Sebastian is a four-time world champion and him suddenly becoming available was unexpected. And, therefore, it is a situation that needs to be monitored. Where could he potentially go, where are we with our drivers, and what I said before is I wouldn’t discount Sebastian for any seat. We have looked at the situation. It’s not lip service, but we owe it to a four-time champion not to come out and say straight away ‘no’.

“You need to think about it. Our priority and concentration is on our Mercedes drivers – that’s Lewis, Valtteri and the juniors. George Russell being one of them; Esteban Ocon is obviously a Renault driver today. And only if we can’t find a solution within that group of drivers we will look elsewhere and then obviously Sebastian is in a very good position.

“One of them may decide he doesn’t want to go racing anymore and suddenly you have a vacant spot. This is why I don’t want to come out in June and say ‘no chance, Sebastian is not racing for us’. I wouldn’t do it to him as a driver, to be that blunt, and on the otherwise side I’ve seen black swans appearing when nobody suspected – remember Nico Rosberg. In that respect, we’re just keeping our options open, but of course concentrating our discussions with our current drivers.

“Regarding Hamilton, we didn’t see each other over lockdown, we were in different parts of the world, but we were in regular contact. But we didn’t work on any agreement. Between us there is a lot of trust, we have been together for a long time, and never in these years together [have] we had to take the contracts out and read what was written in them because it comes so naturally.

“Therefore, once racing resumes, we’re going to spend some time together, take the contract out of the cupboard, look at the timings and the numbers and the rights, and hopefully have something pretty soon.”

On why Mercedes said no to reverse-grid:

Wolff: “First of all, we seem to be digging out old ideas that have been diligently analysed and have been rejected for some good reasons. One of those reasons is that we know it from touring car racing that strategy games are the name of the game, and if you know that you’re not in a great position on the weekend before, you may decide to DNF a car and start the next weekend on pole.

“Maybe there are teams that will be using that for an advantage. Then, midfield cars will fight heavy for position, as they should, so for the top teams coming from behind it will mean more risks in overtaking and that could mean making this championship a bit of a lottery. The number two reason is that we simply love the meritocracy if F1.

“Best man, and best machine wins. I think a lot of fans have expressed that same view. We are real racers, we think F1 doesn’t need a show format like wrestling and the DNA is important. The third reason, and this is the more inward-looking reason, is simply that we have a championship to play for. We believe we have a good car, and of course for the second and third place team it’s an advantage to start in front. F1 is a tough business and you’re not here to make any gifts.”

Siding Hamilton in his thoughts:

Wolff: “We know that Lewis is always a strong supporter of any minorities. To be honest, I have learned a lot from him as well. He has asked me the question once ‘have you ever had the active thought that you are white?’ And I said ‘no, actually I have never thought about it’ and he said ‘well, you know, I need to think about it every day because I am being made aware that I am black’.

“Therefore, it’s very difficult for us to comprehend how difficult it is and therefore I am happy and supportive that he has come out vocal. He is one of the ambassadors of this sport and I think it’s good. I was lucky enough that I was raised in a household with different nationalities. That I lived with a Jewish family for a long time when my family faced tough times and I saw what discrimination looked like as a child already.

“All of us have the power to make a change and sometimes it needs events, like the ones that happened a few days ago in the US, to trigger a massive wave of support for any minority. It’s good that Lewis as a sports superstar is the one up front with it in a sport that is very much dominated by white males.

“We as a team encourage diversity and we choose our people purely on performance and don’t look at any culture or religion or skin colour. All of us can make a difference. Every single one of us must be part of a movement to stop these kind of things happening.”

Here’s information from Daimler on Mercedes and Toto Wolff

Here’s the last episode of In Conversation With