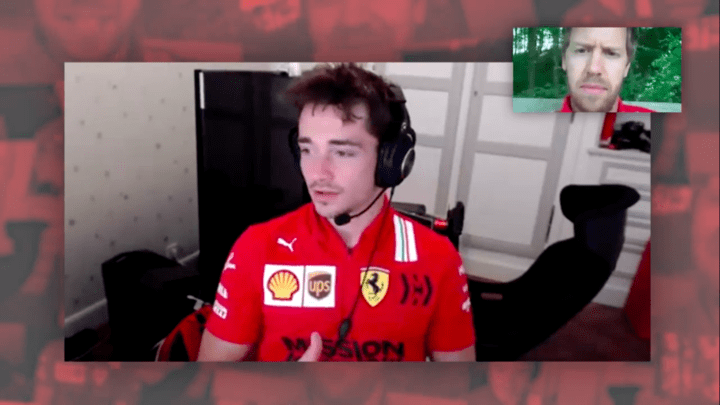 The video edit was such that the conversation quickly bounced around, with it opening on the note of the collective missing of racing between Ferrari’s Vettel and Leclerc, before switching to their expectations for the 2020 F1 season, that remain unchanged.

Then, Leclerc spoke about his time sim racing, and how he has spent his many hours in lockdown, before Vettel, too, discussed the same. The Monegasque used to play for six-seven hours but trimmed to one-two hours in current period.

Vettel had a sim installed but doesn’t play as often – apart from few events – as he didn’t get the same feeling as both later discussed their respective efforts to stay fit, with Leclerc having an indoor gym material in his home in Monaco.

On the topic of home life, the discussion switched briefly to pets after some entertaining cow-related confusion courtesy of Leclerc, as well as some dialogue about dietary habits in lockdown, and some new-found musical talent for the both of them.

Leclerc talked about eating white pasta, chicken and rice, while Vettel revealed about his bakery talent as they both discussed about pizza. The Monegasque purchased artistic materials in a bid to do more crafts, but was cut short due to the use of his simulator.

There was also some banter about music instruments where Leclerc said he tried guitar and piano while Vettel only tried the former. They named their band as ‘Vetteleclerc’ as Coldplay was common favourite of both. They ended talking about holiday venue.

It is unclear as to when the video was shot but this is the first public appearance from Vettel since the announcement of him leaving Ferrari. Leclerc, on the other hand, has had some media outings and does stream on Twitch as well.