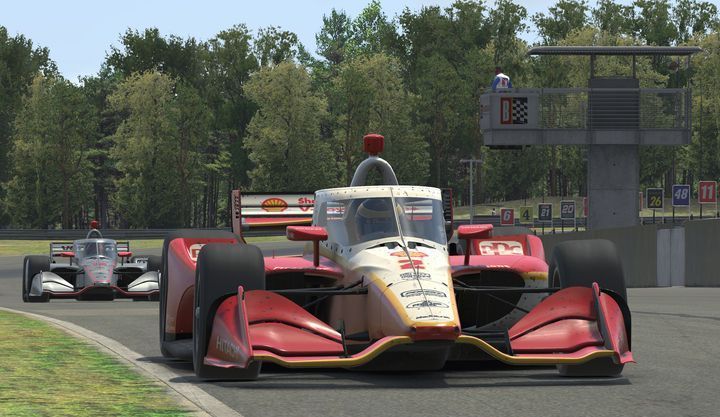 Despite there being no tangible advantage to be had in iRacing IndyCar Challenge series, Team Penske was absent on only one podium, with Josef Newgarden and Helio Castroneves being the only team members not to win in the six-race series.

The success is particularly impressive when you factor in the general lack of iRacing experience among the team’s drivers, with Will Power the only one to have had any significant time clocked behind the wheel of a simulator.

And in the eyes of McLaughlin – who has no IndyCar racing experience even – this says a lot about the people of Penske, human resources being the only advantageous thing in the series, which even has specification set-ups for these particular online races.

“We’ve prepped a lot. I think the first week, Watkins Glen, I didn’t have a spotter or engineer sort of helping me, realized there was a few drivers in there that were using one, and we sort of jacked up the preparation, the data share and all that sort of stuff,” said McLaughlin when asked by FormulaRapida.net.

“Look, they’re [the team] professional, got some great people on board, and I was able to use Jonathan Diuguid, my engineer, when I do potentially race, and TJ Majors on the ovals as a spotter. It was really cool.

“Privileged to learn off some pretty experienced guys, and yeah, absolutely, it’s a pretty class act at Team Penske, and everything they do they want to win in and are very competitive, and Roger expects the highest level. It sort of carries all the way down with every piece of personnel on the team,” summed up McLaughlin.

Overall, Penske scored four wins in six races, two of which were won by Simon Pagenaud, and two by McLaughlin, who had another podium too. Power also contributed to the success with four podiums. As mentioned before, Newgarden and Castroneves were the only drivers for the team that failed to have any noteworthy successes.