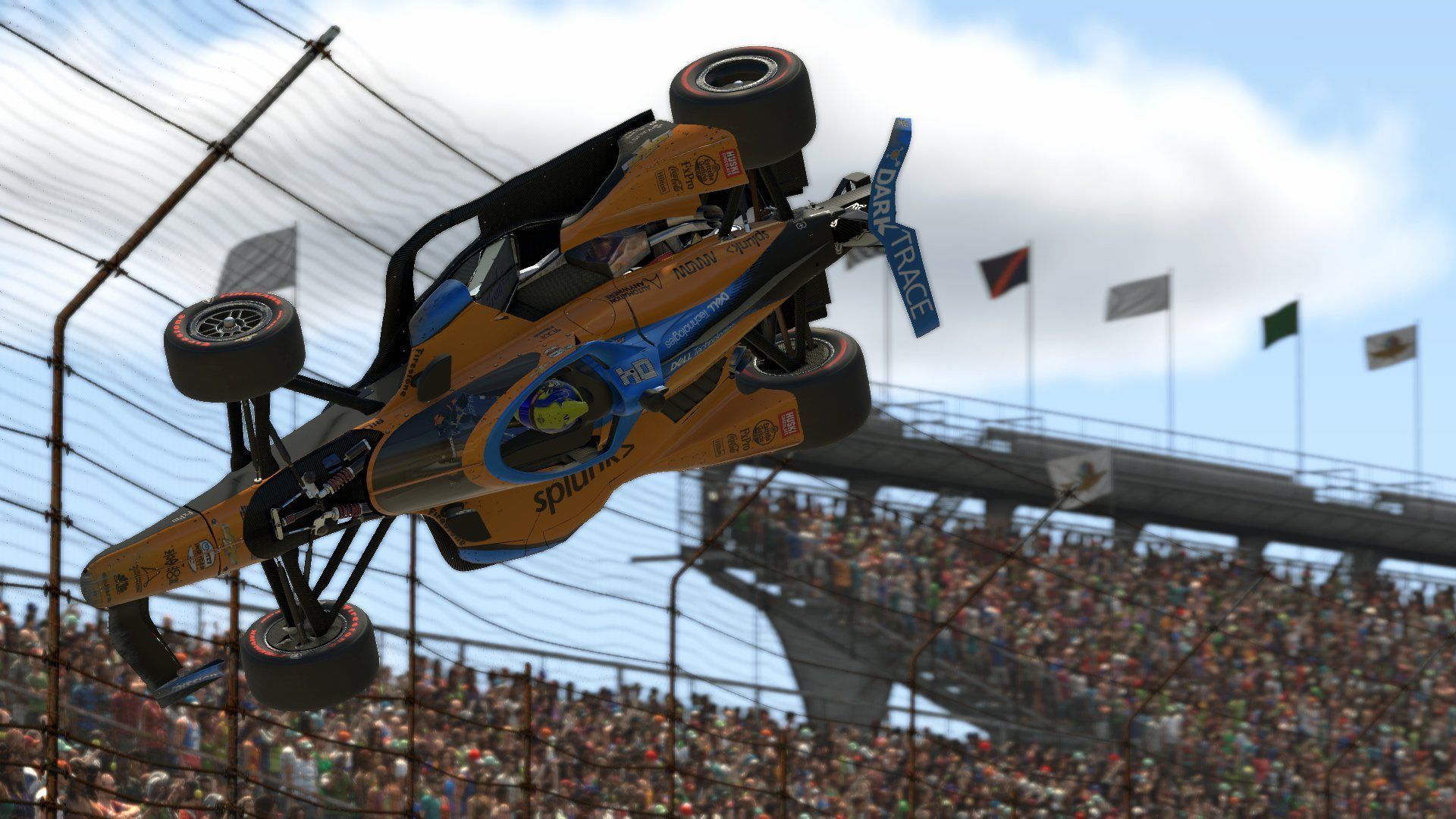 McLaren’s Lando Norris was left unhappy with Team Penske’s Simon Pagenaud following their iRacing IndyCar Challenge crash, as controversies up and down the grid have also stirred the pot.

Within motorsport, controversy is never far. In the heated environment of racing, tempers flare, often leading to altercations between drivers. And, while the stakes are lower, this still applies when it comes to virtual racing which is booming these days.

Never has there been a better example of this than iRacing IndyCar Challenge race at Indianapolis, where the race was littered with controversial incidents, as well as two crashes between champions from their respective series’ – Norris and Pagenaud.

The first moment of interest between the Frenchman and the Englishman was with eight laps to go, as Norris attempted a high-risk overtake on RLL’s Graham Rahal and Pagenaud on the low side of the track, with the American in between.

As the McLaren F1 driver understeered up the banking in the second turn, though, he hit Rahal, who, in turn, sent Pagenaud into the wall. The contact sent the Frenchman down the order, and he was forced to pit to fix the damage that had been done.

Coming out just ahead of Norris, but a lap down, the Team Penske driver was seeking revenge – as his Twitch stream suggested whether as a joke or in reality – and so, with the power to alter the course of the race, Pagenaud slowed down.

It was a bid to hold up his rival and allow Arrow McLaren SP’s Oliver Askew – who was hot on Norris’ tail – to take the lead. The plan was arguably an unwise one, but its execution made it worse, as the Brit ended up hitting Pagenaud in the rear, ending his race.

Off the back of the incident, Norris expressed his displeasure with the 2019 Indy500 winner, who he accused of being ‘salty’ due to the fact that Norris was on the verge of beating IndyCar drivers on their home turf after having chatted with him.

“Just wanted to slow me down…by letting off in the middle of the corner and braking right in front of me,” Norris said with a degree of sarcasm, and an accusatory tone. “Do you know how many hours, how much time I put into the left (turn)?

“With the most delicate touch, I’ve tried doing it one-handed, with my knee. 24 Hours. And then because that guy gets a bit salty that a non-IndyCar driver is about to win an Indy race. It just ruins it. So, yeah, that’s that. I feel so bad for the guys as well.

“Maybe some people aren’t taking it as seriously and they just think it’s a game and it doesn’t matter. But there’s still a lot of other drivers, I had Jarv, the engineers and the guys doing strategy. We still put time into it, whether or not we’re at home doing nothing, they’re still working on it and they could be doing other things with their families let’s say.

“They’re still wanting to take part and win a race still. Then some guys just get all selfish, doesn’t care about any of it,” summed up Norris. The Brit was not hugely over it as while playing Call of Duty, he spoke with Red Bull Racing’s Max Verstappen as well.

When Norris relayed the incident and the chat with Pagenaud, Verstappen was left surprised by the move along with sim racers Bono Huis and Graham Carroll on the stream. McLaren Racing’s boss Zak Brown wasn’t impressed either by the standard.

"A guy gets a bit salty that a non-IndyCar driver is about to win an Indy race."

Lando Norris was not happy on Twitch with Simon Pagenaud after he was taken out by Pagenaud while Norris was leading near the end of Saturday's #INDYCARChallenge. pic.twitter.com/10Ve4aJl6m

Max has got Lando's back pic.twitter.com/r2HC2qSsqn

"Dude, I saw your IndyCar thing… what the hell, the French guy, man…"

To make matters worse, footage from Pagenaud’s stream showed him suggesting to his engineers that he should take Norris out, and then inquiring about how far behind Norris was. Despite the Frenchman’s attempts at defending himself, the Brit wasn’t buying it.

"He's such a liar! He's a class act!" pic.twitter.com/RpvzvE0C4K

And the crash from Simon's POV. pic.twitter.com/GJQWFVMji5

Lots of views have been on display on various social media channels regarding the incident. To the dismay of IndyCar, though, this was not the only farcical happening. In fact, it wasn’t the only lead-costing happening that was unnecessary and controversial – rather, there were two more of those within the last lap alone.

First, it was Chip Ganassi Racing’s Marcus Ericsson and Arrow McLaren SP’s Patricio O’ward who collided, as the latter was on the inside of the former, and tapped his rear left, which sent the Swede up the track and into the wall.

At first, Ericsson wasn’t thrilled with O’Ward’s overzealous move, tweeting him to congratulate and thank him for what was a ‘nice move’. The Mexican didn’t appreciate the comment, and hit back, suggesting that he was not allocated the proper amount of space.

Ericsson disagreed, and the conversation went no further, at least in the public eye. Mostly, it has been overlooked because of the highly controversial incidents that flanked it, the one prior being between Pagenaud and Norris.

I disagree bud. That move in that specific corner wasn’t on. Just drove straight into my rear wheel. A shame after a good fight.

Between the two, another hit brought plenty of heat for Dale Coyne Racing’s Santino Ferrucci and Askew. With the Arrow McLaren SP driver having inherited the lead in the final turn, it was a straight-line shootout to the line between him and his DCR counterpart.

However, in an apparent turn to the left, which was perhaps a failed bid to get into the draft, Ferrucci hit Askew, and the two hit the wall which helped Team Penske’s Scott McLaughlin to win. Surprisingly, Askew appears to have taken it on the chin after a brief expression of anger, but the same could not be said for fans of the sport.

They have unleashed a firestorm of criticism online, most of whom are accusing the Italian-American Ferrucci – who has a storied past, littered with controversial moments – of intentionally taking out his rival. His post-race comments haven’t gone down well too.

– That was so intentional. It would have been really tight, I just tapped him a little bit to slow him down.

– Dude, it is a video game, come on. pic.twitter.com/hicHq2VWbi

"I did not expect to do that." @SantinoFerrucci talks about his contact with @Oliver_Askew that ultimately cost both of them a shot at the win coming to the yard of bricks at @IMS. pic.twitter.com/3VYpPdg2kC

This was an @IndyCar private series with participants exclusively chosen by them. We are not in the business of policing anyone’s private league’s for racing issues. Does it suck that he made a mockery of a great opportunity for the series and @iRacing? Absolutely.

Here’s how the race panned out with video link included