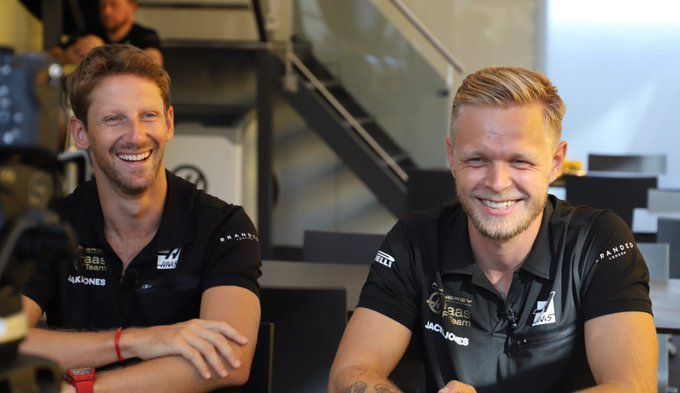 Haas drivers Kevin Magnussen and Romain Grosjean do not have issues with each other despite their clashes in the 2019 F1 season.

While Haas F1 team principal Guenther Steiner is finding ways to impart basic lessons to Magnussen and Grosjean to not clash with each other on track as the team tries to understand the issues they have with the 2019 car, the drivers find ways to hit still.

Following the British GP disaster, the pair once again hit each other in the German GP, where they managed to continue on to end up seventh and eighth respectively – with the result being kept provisional after Alfa Romeo Racing’s appeal.

Steiner hasn’t ruled out team orders as the rules of engagement could be seen from this weekend’s Hungarian GP. The drivers on the other hand seemed relaxed about the situation, when asked during the press conference at Hungaroring.

Both Magnussen and Grosjean were adamant that they gel on well with each other and that the on track clashes hasn’t diluted their relationship. Grosjean reckons the radio calls are normal for any driver, while Magnussen thinks it is blown out of proportion.

Even for their future with the team, they hinted on being in no pressure situation. While Magnussen seems safe, anyways, Grosjean is under pressure but the Frenchman talked about experience and also shared his longtime manager’s photo on social media.

Even Haas shared a video of both the drivers signing autographs together, which will be presented to all the members of the team as a gift. Both had a lot to answer, which can be found below as we present it in full to be clear of what they said:

Q: I’d like to come on to Kevin and Romain together now. First up, congratulations on the double points finish in Hockenheim, however the race marked the third time you guys have hit each other on track this year: Spain; Silverstone and, of course, Hockenheim. I just want to ask why this keep happening? Kevin, perhaps we could start with you?

Magnussen: “I don’t know really. It’s happened a few times this year and, in terms of… it happened in Silverstone and it had a consequence for both of us. We punctured. I think that was pretty unlucky, to have two cars puncturing for such a small contact.

“There were no bad intentions from either of us in that moment. We came together and punctured. Later in the race you see other cars flying into each other, flying over the track and nothing happened. Got to look at that as well to say, bad luck really. That’s pretty much it.”

Grosjean: “We love each other. That’s why we get on, have a bit of a kiss on track. No, I think, as Kevin said, there’s been a bit of bad luck in Silverstone. I think the relationship, people could think that it doesn’t look good but actually the relationship with Kevin is really good. We phone each other once a week or so.

“We sat down and said, ‘what can we do better’, just to make sure that’s not happening again. Obviously we’ve got the same car, so it’s happening that we are side-by-side on track more often than with the Mercedes, for example. Yeah, there are things we can probably do better.

“I think the most important is that we always try to do our best for the team, and give our best and maybe just the cursor wasn’t well positioned on some of the occasions we had, and we just going to make sure we get better from there. Honestly, the relationship is very good and we actually like – well, I like working with Kevin, maybe he doesn’t – but I think he likes it also. We work well together and we get on nicely.

Magnussen: “Absolutely. I think in the heat of the moment, we’re blaming each other on the radio and stuff like that – but what people don’t see is that we get together between the races and talk it through and try to be constructive and move on in a constructive way.

“Apart from those incidents on track, I feel that we have a pretty good working relationship. And actually, Romain is a cool guy, and we actually have a good time when we go to work. So, it’s being blown out of proportion a little bit. I know you guys love a bit of a conflict and stuff like that, so… but it isn’t as bad as it looks.”

Q: Romain and Kevin, Guenther has said that he is going to have to take a firmer approach with you two to stop these clashes on track – rules of engagement, things like that. What’s your response to that? Do you feel it is necessary to put this in place between you two? Is it disappointing that that action has to be taken?

Grosjean: “No, I think again we are here to do the best for the team and if that’s the solution, the short-term fix, then why not. I think, as I say. We’re not here fighting for the first or second place in the world championship. I don’t really give a damn if I finish 14th or 16th at the end. We don’t have a fast car at the minute and the focus is on getting that car to work well. The team has been reverting me back to the car from Melbourne.

“I have been running for three events now, just trying to understand everything, so I think the bigger picture, the big keys, is to understand how we get faster and better, how we can come back in the Constructors’ Championship and to make sure that the future of the team is not compromised by a non-understanding of the car.”

Magnussen: “At the end of the day it doesn’t really matter what we think, we will just respect what is being said and required by the team. I can understand the team’s point of view. We had a pretty bad experience in Silverstone and clearly they want to avoid that happening again and we’re just going to deal with it in the way we’re required and make the best for the team, as Romain said.”

Q: Good to see, Romain and Kevin, that you’re best of buddies and that you’ve got a great relationship, but it does appear that you’re very quick to blame each other when you have these incidents. Do you both still believe that the other one is very much at fault or would you say that you should both share the responsibility for what’s happened at the team recently?

Magnussen: “I think that in the heat of the moment, you know, you’re always feel that you’re in the right, and then you analyse things after you see it’s probably more level and not as big a deal as it felt like on track. At the end of the day I don’t think it’s such a big deal, you know. We will try to do everything we can to not have these issues again.

“I think, as I said before, it became a very big issue when we both punctured in Silverstone. Apart from that, the end of the story is that we do respect each other and we want to do the best for the team and there have been laid out some guidelines for us now that we’re going to respect and then just carry on.”

Grosjean: “I think on the football pitch you don’t have any microphone listening to what… even inside a football team between the team players they can say things, they’re not happy with each other, and you’re not saying that ‘oh that team is having any issue’, because I think in F1 it’s great that everything is broadcast but also it makes a story out of nothing. As I say, our relationship is good.

“When you’re driving at 300kph obviously you’re not going to say ‘Oh, please, I think I was in my right, and he was in his wrong and would you mind giving me the position back, but I my only, please’. You’re just going to say: ‘F**k of, just give me the position.’ Unless you want us you want us to be very, very boring, then I’ll remove the microphone from the helmet, then I think it’s always going to happen. Still it’s false but that doesn’t really matter, does it.”

Q: To Romain and Kevin again: how concerned are you both that this could be putting your future at the team at risk?

Grosjean: “Let me answer the question differently. I was more worried last year than this year. Last year there were a lot of reasons that I could have ended up this year at home and I did many mistakes that I shouldn’t have done with my experience. But I think since then I have recovered pretty well. I think everything we have been saying this year – the eye opener for the guys on reverting back to the old spec car, because I asked, shows that the experience is very important in F1.

“Everything in the team has now changed. The focus is on the different parts and how we make sure we improve the car other than we just put upgrades without really knowing where we are. The races I’m happy with my performance. I think in qualifying I could have been better earlier in the year but now it’s back to where it was. As I said, last year there were many reasons, to be frank, to stay home. This year I guess there are many less.”

Magnussen: “Not worried at all.”