Home F1 Hamilton: Nice to redeem myself with a better start in China after... 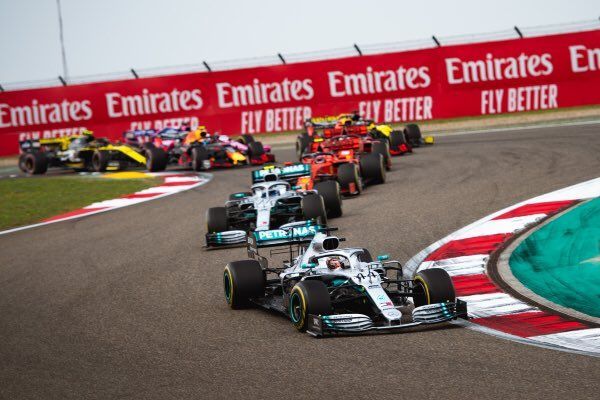 Mercedes’ Lewis Hamilton was a relieved man to finally able to start well in F1 Chinese GP which helped him to score his second win.

Hamilton had a slow start in Australia and Bahrain, where he lost out to Valtteri Bottas on both occasions, but he finally managed to pull it up in the F1 1000 race at Shanghai International Circuit from the front-row to beat pole-sitter Bottas.

He then pulled away nicely to take his second win of the 2019 F1 season and become the new championship leader. His starts has been a problem all-through his career – most notably in 2016 when Nico Rosberg used to his advantage to take the title.

Over the years, he has put in more effort to rectify the issue which reflected well in 2018. However, the 2019 season started on a bad note until China, with the hope now to continue the same way in the remaining 18 grand prix.

“The 2016 season, you could say, was one of the worst. Probably back in 2007, 2008 was also really poor period of time for starts, particularly against the Ferraris who were very, very strong with it. Last year was actually a really strong year for me.

“I think I just finished second overall of quickest starts throughout the year to, I think it was Carlos Sainz or so. Arguably it was first – but it’s dependent on the GPS. The first few races have been difficult for me off the line.

“So, it’s nice to finally kind of redeem myself and rectify that. Naturally the next 18 races can still be up and down – just have to keep working at it.” Not only the starts, Hamilton had to work extra in the weekend to do well after starting on the backfoot.

The British racer changed his lines as the weekend progressed which eventually helped him in qualifying and then in the race as well for him to win at ease. “It really has been an interesting first three races,” he said.

“We, as a team, definitely didn’t expect to have three one-twos, but now I’m proud to have been part of the work that everyone has done and to be a part of these results. Valtteri has really stepped up this year and done an exceptional job.

“So we’re both delivering on the weekends. A little bit of a struggle this weekend for me, but once I got into qualifying, a little bit of a shift in driving style enabled me to unlock a bit more potential with the car, which Valtteri was clearly able to do.

“And then the start was obviously great, which was really the decisive moment I’d say for the race. And then after that it was fairly straightforward. I managed to have quite good pace today compared to P2, practice two, long run pace, so I’m really, really happy with it.

“You can see it’s still quite close with us all and I think it’s just down to little small details of overall performance that’s enabling us to come out with the results we’re pulling.” After three races, even with a re-charged Bottas, Hamilton seems to have the upperhand now.

Alexander Albon made the strategy call to score points

Sergio Perez happy but Lance Stroll not after China