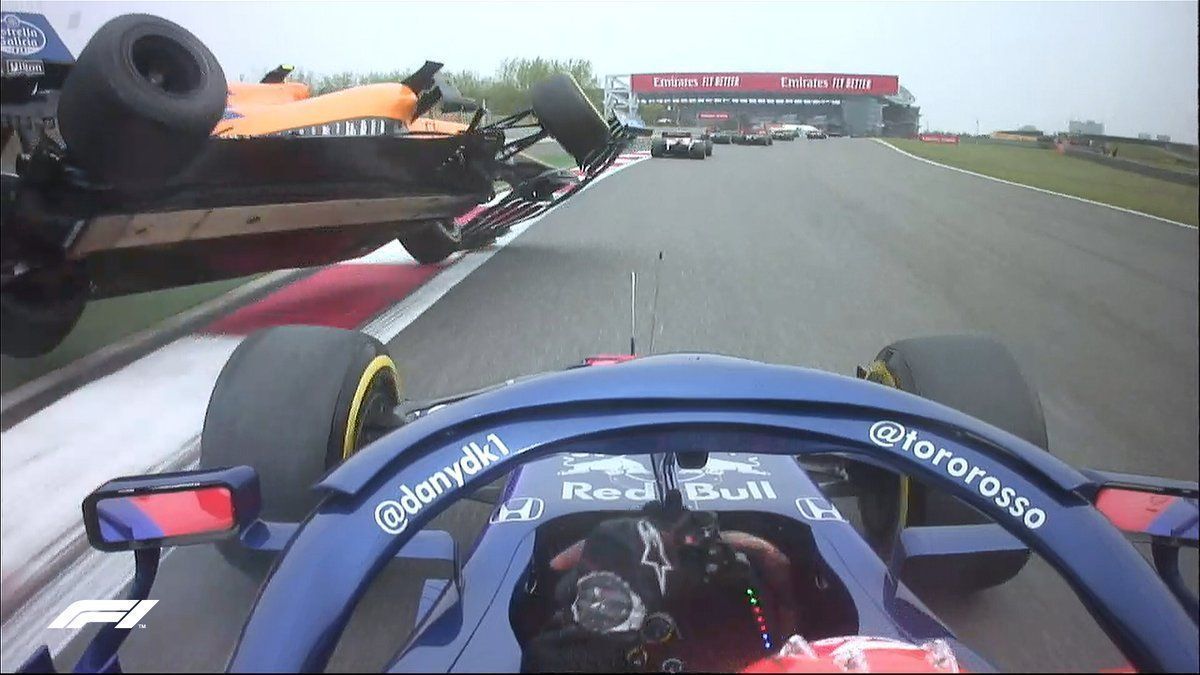 Toro Rosso’s Daniil Kvyat will have a chat with the stewards for the penalty he received for his collision with the McLaren drivers in F1 Chinese GP.

Kvyat started the Chinese GP in the midfield in F1 1000 weekend at Shanghai International Circuit along with McLaren’s Carlos Sainz and Lando Norris. He was fighting with the two in the hairpin when he had a collision with both the cars.

First it was Sainz, the left-rear of Kvyat touching the front-right of the Spaniard which pushed the Russian into Norris when Kvyat’s left-front touched the right-rear of the British racer – all three had damage with an extra pit stop required to change parts.

A strategic decision saw Norris and Kvyat retire from Chinese GP, while Sainz finished a lap down in 15th. Post-race, it was a mixed response from the drivers with Kvyat not too happy with the Chinese GP stewards decision to hand him a drive-through penalty.

The Russian said he watched the onboard of his and Norris’ car and saw it as a racing incident while adding that he will speak with the stewards behind the closed doors to understand what was wrong for such a harsh penalty.

“I saw the replays quite many times now – I had time – and to be honest, I totally disagree with the penalty,” said Kvyat to the media. “I’ll speak with the stewards behind the close doors to find out what was their opinion on that.

“There was absolutely no understeer, nothing like that. Honestly, it was a corner exit, my car was totally straight and by regulation, I had to leave a car width to the car next to me which I did. It was three cars in one corner and one car coming back on track very sharply.

“Honestly, I don’t see this incident was very particular, it was a typical Lap 1 sandwich, so these things happen especially Lap 1, so that’s exactly why I don’t understand the penalty. It was an unfortunate race.

“I think the pace we had even with a broken car was very-very strong, it’s very-very unpleasant, not to be able to transform the pace into anything, two races in the row now. Its a cold shower for us because the potential was very deep into the points.”

The disappointment grew even bigger when his teammate Alexander Albon scored a single point after starting from the pitlane due to his FP3 crash. Sainz thought Kvyat should have done what Albon managed to do, that is to remain patient.

The Spaniard felt that Kvyat was rushing to gain places after a bad start which undone the races of all the three drivers. “Obviously, it is Lap 1 and I understand his frustrations,” started Sainz [on a sarcastic tone]. “It can happen as it is Lap 1.

“But it is 55 laps to go after that, so even if you don’t get best of starts – look at your teammate finishing in points starting from the pitlane – it is a long race, you don’t have to open the steering wheel in the exit of the corner.

“Especially, when you know that you have two McLaren side-by-side because I think he knew we were there. Its a shame because of the incident and also because you are in Shanghai where you can overtake even if you don’t have best of starts.

“You have to be patient and think that you can get back in the points. That’s exactly what Lando and I were doing, we were just in a melee.” His teammate though put it down as a racing incident more – even though he added that he is to see the data in full.

“I just saw it [the video] after I stopped the car, to be honest he squeezed Carlos a little bit and then the contact between them meant he went into me, so it wasn’t that someone like just hit me or whatever, it looked like a bit of a racing incident,” he said.

“I [still] need to look at it in a bit more detail but apart from that the first few corners were very good. I managed to go around the outside, I almost passed Kimi but I had to back out of it as it got close. Carlos’ pace was positive to see despite few damage.”