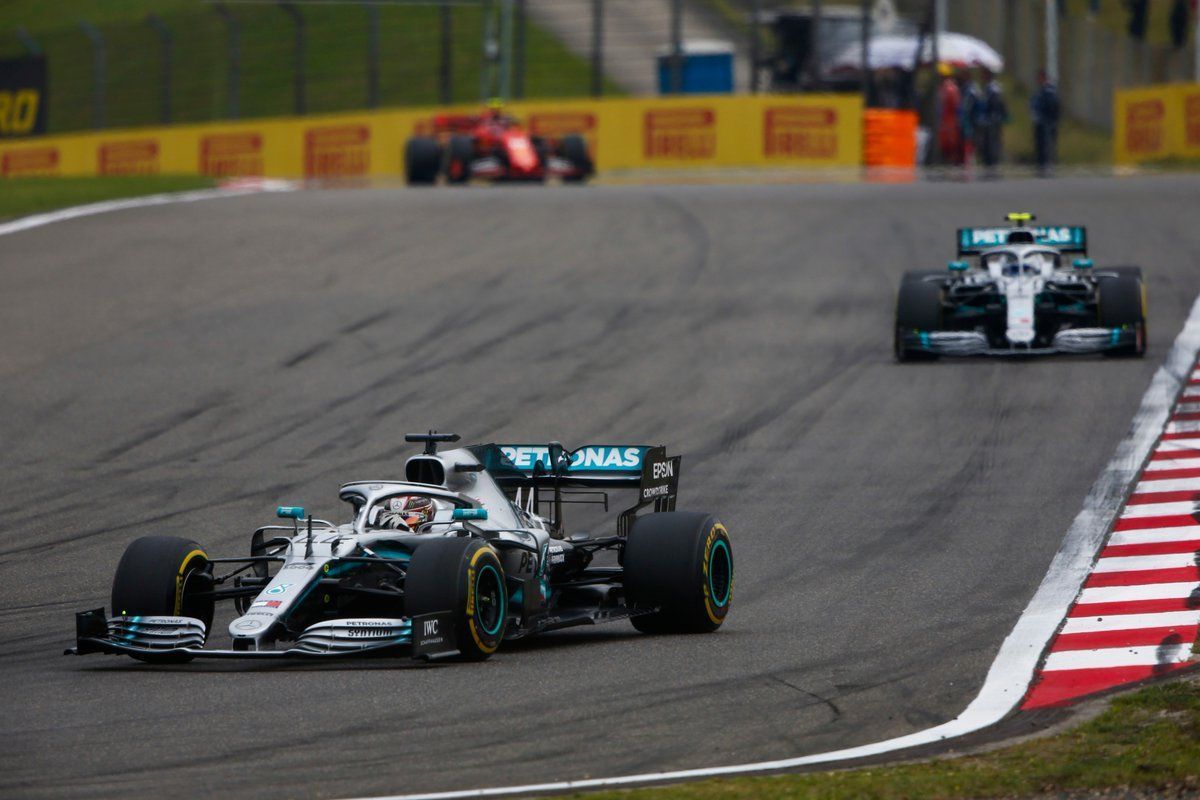 Lewis Hamilton eased into a fine win in F1 1000 weekend with Mercedes scoring a 1-2 in Chinese GP as Valtteri Bottas was second and Ferrari’s Sebastian Vettel in third.

Unlike the other two grand prix, Mercedes Lewis Hamilton made a better start in F1 1000 at Shanghai International Circuit as he jumped teammate and pole-sitter Valtteri Bottas to take the lead of Chinese GP ahead of the Ferrari duo.

It was Charles Leclerc who got the jump on Sebastian Vettel to third after the German got slowed down by Bottas in the lead-up to Turn 1. Red Bull Racing’s Max Verstappen hung on fifth as Racing Point’s Sergio Perez jumped from 12th to eighth on the opening lap.

Behind, Toro Rosso’s Daniil Kvyat came together with McLaren’s Carlos Sainz and Lando Norris in the hairpin, enough to damage both the McLaren drivers’ cars. It looked like a racing incident but the stewards handed Kvyat a drive-through penalty.

Kvyat had a overteer moment in the corner when he bumped with Sainz first after which he tagged Norris to send him airborne. The Virtual Safety Car was deployed as well then to clear the debris but it was a brief one – not much to change the course of the grand prix.

At the front though, Hamilton continued to lead Bottas but there was a change for third when Ferrari asked Leclerc to move aside for Vettel. The Monegasque wasn’t too happy as it eventually cost him a place to Verstappen after pit stop.

Leclerc went four laps longer in his first stint in the hope to eke out some advantage with the Ferrari driver pitting along with the Mercedes drivers where Bottas was given precedence over Hamilton to help the British racer later in the race.

It was a fight on hands for Vettel though when he pitted on Lap 19 alongside Verstappen as he came out just in front of the Dutchman. The two went wheel-to-wheel in the same hairpin where they made contact in 2018 but this time Vettel hung on well.

Behind the lead pack, Renault suffered a failure for Nico Hulkenberg which forced him to retire but teammate Daniel Ricciardo went well in seventh from Perez. It wasn’t all well for both the Haas drivers as they found themselves outside the Top 10.

It helped Alfa Romeo Racing’s Kimi Raikkonen and Toro Rosso’s Alexander Albon though with the two settled in ninth and 10th respectively while Racing Point’s Lance Stroll chased on for the final point – all three drivers gaining well from their start position.

The two stop strategy got in play when Verstappen triggered it on Lap 35 with Vettel doing it on Lap 36 and Mercedes opting for a double stack on Hamilton and Bottas on Lap 37 – all four switching on to the medium compound for their final stint.

Ferrari kept Leclerc out until Lap 43 – on Plan B – with the Monegasque chasing Verstappen for fourth along with the fastest lap point. At the front though, Mercedes looked well settled for their third consecutive 1-2 finish in 2019 F1 season after the humdrum of Ferrari pace.

Hamilton eased towards the end to score his second win of 2019 in F1 1000’s Chinese GP was he took the championship lead from Bottas, who finished second with Vettel completing the podium. Hamilton had won the 900th race as well.

Verstappen, meanwhile, hung on to finish fourth after Leclerc couldn’t catch him in the end with the Monegasque having to settle for fifth. He complained of a gear shift issue but the Italian outfit said all was fine at their end.

Red Bull opted to pit Gasly to push for the fastest lap which the Frenchman took it from the Vettel on the final lap as he finished sixth ahead of Ricciardo, who scored his first points for Renault in Chinese GP. He was also the first driver to do a one stop race.

He was followed by Perez as he managed to hold off Raikkonen towards the end with Albon taking away the final point in Chinese GP, keeping Haas’ Romain Grosjean at bay. Like Ricciardo, Perez, Raikkonen and Albon also were on one stop strategy.

But the Mexican and the Finn started outside the Top 10, but it was a major coup for the Thai racer who started from the pitlane and fought his way to the Top 10. Grosjean was 11th with Stroll finishing 12th after a late stop to push towards Top 10.

The Canadian managed to overtake Haas’ Kevin Magnussen with the Dane having another tough grand prix with the lack of race pace in the car. After the early hit, Sainz managed to recover to finish 14th from Alfa Romeo’s Antonio Giovinazzi.

It was another difficult outing for the Williams duo with George Russell in 16th and Robert Kubica 17th but they both finished two laps down the leaders. Looking at strategic picture, Norris and Kvyat retired from the race after Hulkenberg’s early DNF.