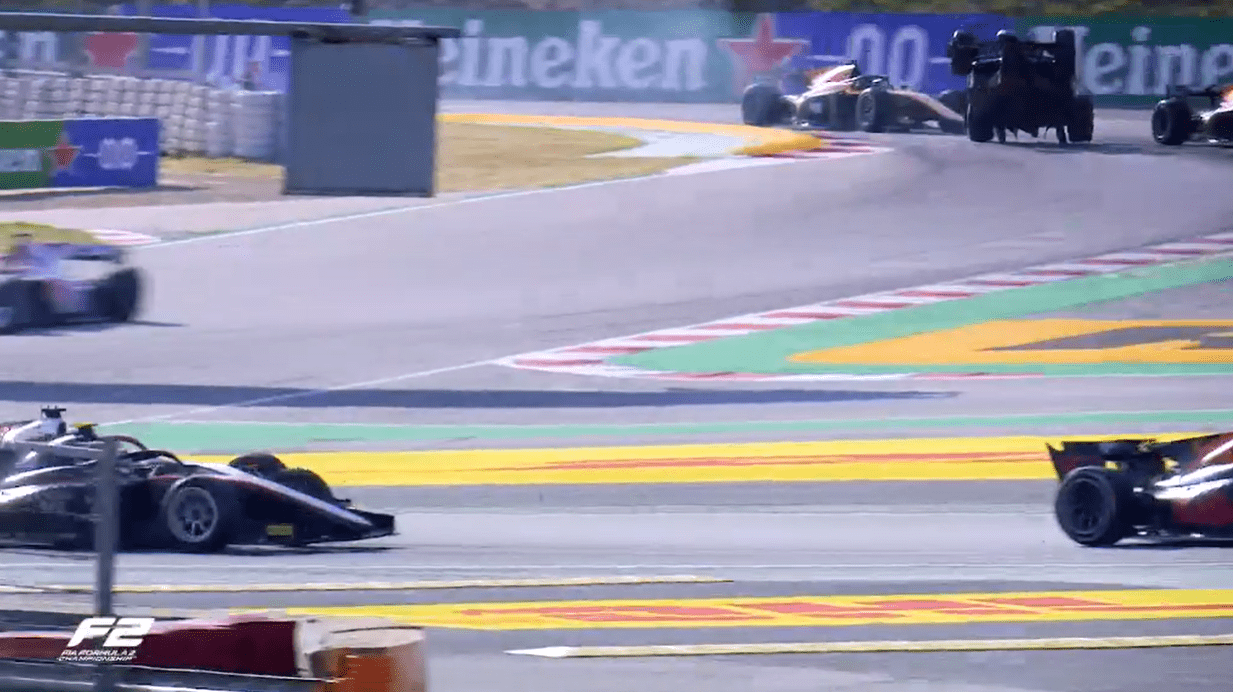 The 2020 F2 review video showcases the crash of Sean Gelael at Barcelona as Lewis Hamilton gymming to regain weight loss due to COVID-19.

The feature F2 race at Barcelona ended in a peculiar manner when the camera showcased Gelael stopped at the Turn 14-15 run-off. For the brief seconds they showed him on world feed, the Indonesian was not moving but not much was said immediately.

Later on, DAMS confirmed that Gelael was taken to the hospital where it was understood that he suffered a D4 mid-spine fracture. The statements from the team and the FIA had no mention of how the crash happened, neither they showed any video.

Gelael missed four rounds where Juri Vips filled in for him but returned for the final two weekends in Bahrain to potentially end his F2 career. With the 2020 season now done, F1 TV uploaded a season review video on Monday on its OTT platform.

The review video finally had the crash footage of Gelael for the first time. As was known, the contact happened due to a collision with Campos Racing’s Jack Aitken on the final lap, with some reports suggesting a 45G impact for the Indonesian.

The brief video did not show the onset of the crash but had Aitken just behind Gelael, who was airborne after hitting the kerb at Turn 14. His front-end was in the air until the exit of the corner as he then came down hard, which possibly hurt his back.

With the 2020 F1 season done and having collected awards at FIA Gala and also BBC, Hamilton is back at the gym, to rebuild the muscles and regain the lost weight in the last few weeks, especially due to catching COVID-19 in Bahrain.

It is still unclear how he caught it but Hamilton revealed that he lost four kilos due to COVID-19 and a total of six kilos in that triple-header period to end the 2020 F1 season. The Brit did admit that he wasn’t 100% in Abu Dhabi but managed to race still.

“I’ve lost six kilograms over the part two months, four of which I lost when I got Covid,” wrote Hamilton. I’ve lost so much muscle. Starting from a low point in strength now, not fun, but I’m determined to get my strength back and be 100% again. No pain, no gain.”

As his preparation for 2021 F1 season continues, interestingly, Hamilton is yet to sign a fresh contract with Mercedes, even though he is already mentioned on the provisional FIA entry list. He wanted to do it before Christmas but it looks to be delayed again.

Here’s how FIA Gala panned out