Mercedes-Benz EQ Formula E Team has completed its first track run in Italy with Stoffel Vandoorne and Edoardo Mortara behind the wheel.

The German manufacturer revealed its teaser look of its Formula E car, the Mercedes-Benz EQ Silver Arrow 01, last month and has since completed its first-ever track run at Varano in Italy last week with Vandoorne and Mortara driving.

The duo undertook 527 km in the brand new Gen2 car across the three days of running. The first day on Wednesday was set aside for the permitted 50 km run to check the systems, while they carried out the rest of the test on Thursday and Friday.

“When a new racing car comes to life for the first time and goes out onto the track, that’s always a very special moment. Not only have we reached an important milestone for our as yet young team, but we have also laid a solid foundation for further development.

“But there is still a lot of work to do before our race debut when the next season starts towards the end of this year,” said Toto Wolff, Head of Mercedes-Benz Motorsport Division. The team is preparing for its first season in 2019/20.

Mercedes-Benz Formula E’s MD, Ian James added” “We are very pleased with the progress made during our first test with the new car. The first days of testing at Varano were a very important step in the development of our team.

“We brought together experts from our different sites at Affalterbach, Brackley, Brixworth and Stuttgart, and at the end of a successful three days, they left as members of a team – it was the birth of the Mercedes-Benz EQ Formula E Team.

“In the coming weeks and months, many more milestones will follow on the way to our first race.” The German manufacturer follows Porsche, who will also make its debut in 2019/20 season, to complete its shakedown after they had theirs early in March. 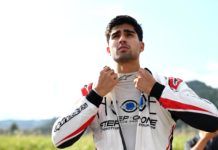