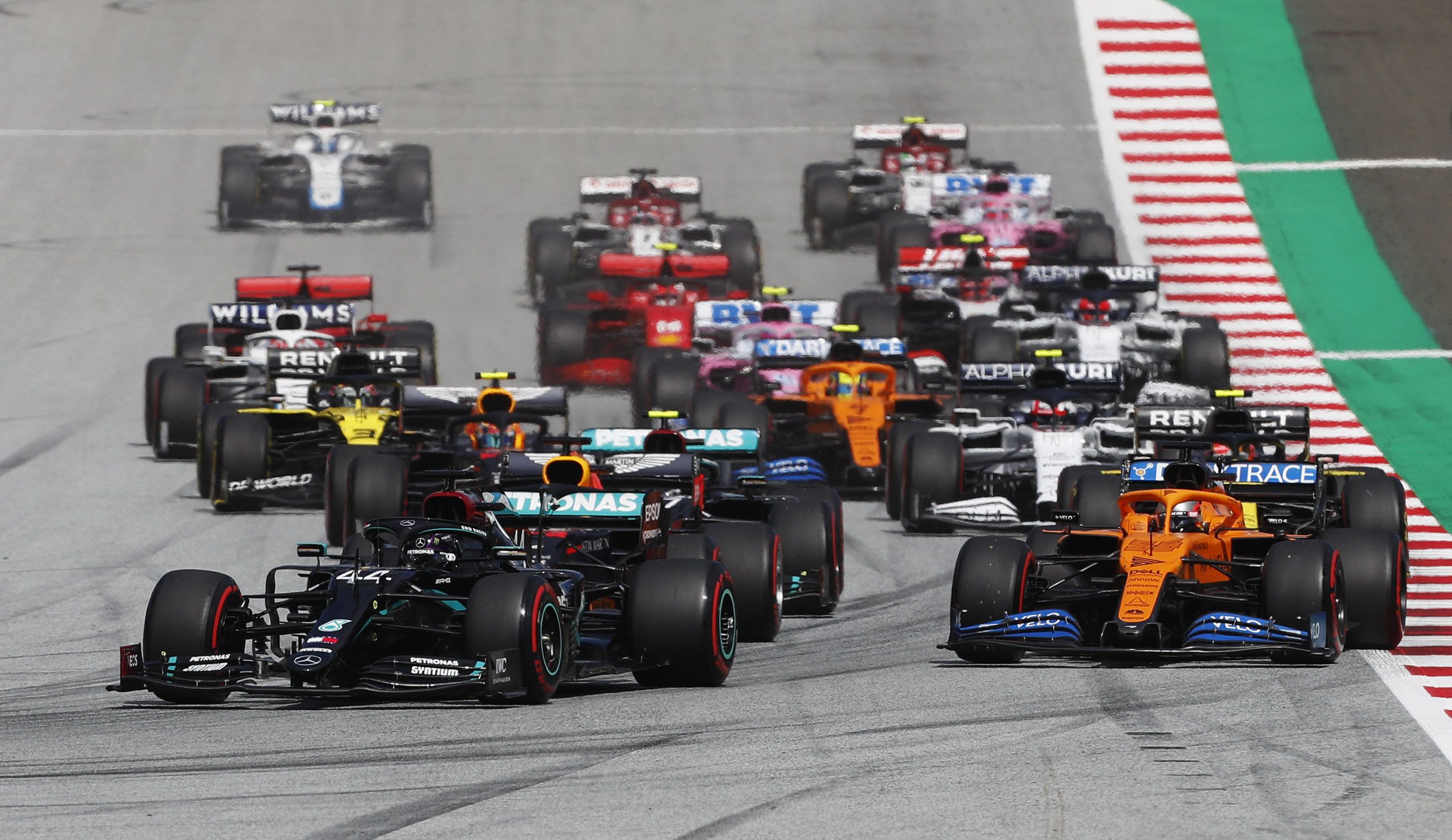 It was a euphoric start to F1 Styrian GP from Mercedes’ Hamilton as he led the way cleanly from Red Bull’s Verstappen and McLaren’s Carlos Sainz at a dry Red Bull Ring. Mercedes’ Bottas slotted in fourth from Red Bull’s Alexander Albon.

The latter half of the Top 10 had Renault duo Esteban Ocon and Daniel Ricciardo leading from AlphaTauri’s Pierre Gasly, McLaren’s Lando Norris and Racing Point’s Lance Stroll. It was mayhem behind, though, with the two Ferrari F1 drivers coming together.

Sebastian Vettel had a slow getaway as Charles Leclerc was right behind and Racing Point’s Sergio Perez beside him. Going into Turn 3, the Monegasque tried a move on the inside, the same place where the German had spun last weekend in F1 Austrian GP.

The two touched as the safety car was deployed with Vettel retiring straightaway with a broken rear wing. Leclerc dived into the pits to change his front wing but the damage was too much to continue any longer. Upon re-start, Hamilton led the way cleanly again.

Sainz lost out to Bottas and Albon to drop into the clutches of Ocon and Ricciardo, who were tussling among themselves for track position. Just behind them, Norris had Stroll, Williams’ George Russell and Haas’ Kevin Magnussen in the fight for 10th.

Norris held on then but lost out later on, while Russell went off onto the gravel to drop back. In the meantime, Perez joined the fight as well and passed Norris to get inside the Top 10. His teammate, meanwhile, passed Gasly for eighth in his chase of Renault.

It didn’t take long for Perez as well to get by the Frenchman, while Ricciardo finally got ahead of Ocon with the F1 team not opting for team orders despite being on different compounds. It was fruitless in the end as the latter retired due to cooling issues.

At the front, Hamilton maintained his lead and despite a try from Verstappen to pit early on, the track position remained as it is but it was advantage Mercedes with Bottas pitting late, having got a fresher compound than the Dutchman.

Albon remained in a no-mans land but behind Sainz lost out hugely after a slow stop from McLaren. Both Stroll and Perez got through him to gain track position and put themselves just at the back of Ricciardo in the fight for fifth position in F1 Styrian GP.

It didn’t take long for Racing Point to catch the Australian as Perez cleared Stroll and even Ricciardo to take fifth, having started from 16th on the grid. The Mexican then set out on the charge to get past Albon, who was struggling to keep up with Top 3.

Outside the Top 10, Alfa Romeo Racing’s Kimi Raikkonen was fighting with Haas’ Magnussen and Romain Grosjean. The Finn maintained track position in the tussle, but the Dane lost out to his teammate for 13th.

Just ahead them, McLaren played a team game to allow Norris get by Sainz for eighth in the pursuit of Stroll as Red Bull cautioned Verstappen with a front wing damage. Bottas caught him quickly then as the two had a superb fight for track position.

Bottas got through him but Verstappen came back to retake the position in Turn 2-3-4-5 sequence. The Finn stayed back but tried again in the next lap to make the move stick and make it a Mercedes 1-2 in F1 Styrian GP as Red Bull called him in for fresh tyres.

Up front, Hamilton eased in to win the F1 Styrian GP from Bottas as Verstappen ended up third but couldn’t get the fastest lap as Sainz also pitted for a fresh set of tyres and got it, as McLaren made it two in a row to set the quickest lap.

There was drama behind the Top 3 through as Albon nearly had another DNF when he collided with Perez. The Mexican tried a move on him but they touched which left damage on his front wing as he started to slow down and fall into the clutches of others.

The fight between Ricciardo, Stroll and Norris took a huge turn when the Canadian made the move on the final lap which allowed the Brit to sneak in and get past both the drivers. With Perez slowing, the McLaren racer passed him as well to end up fifth.

The team call from McLaren eventually helped Norris to gain three places in the Top 5 as Perez just held up Stroll to take sixth with Ricciardo seventh – although both of them are under investigation. Sainz was ninth with AlphaTauri’s Daniil Kvyat in 10th.

Missing out on points was Raikkonen in 11th with Magnussen getting past Grosjean to end up 12th while Antonio Giovinazzi lost out to be 14th from Gasly, Russell and Nicholas Latifi. DNF: Ocon, Leclerc, Vettel.