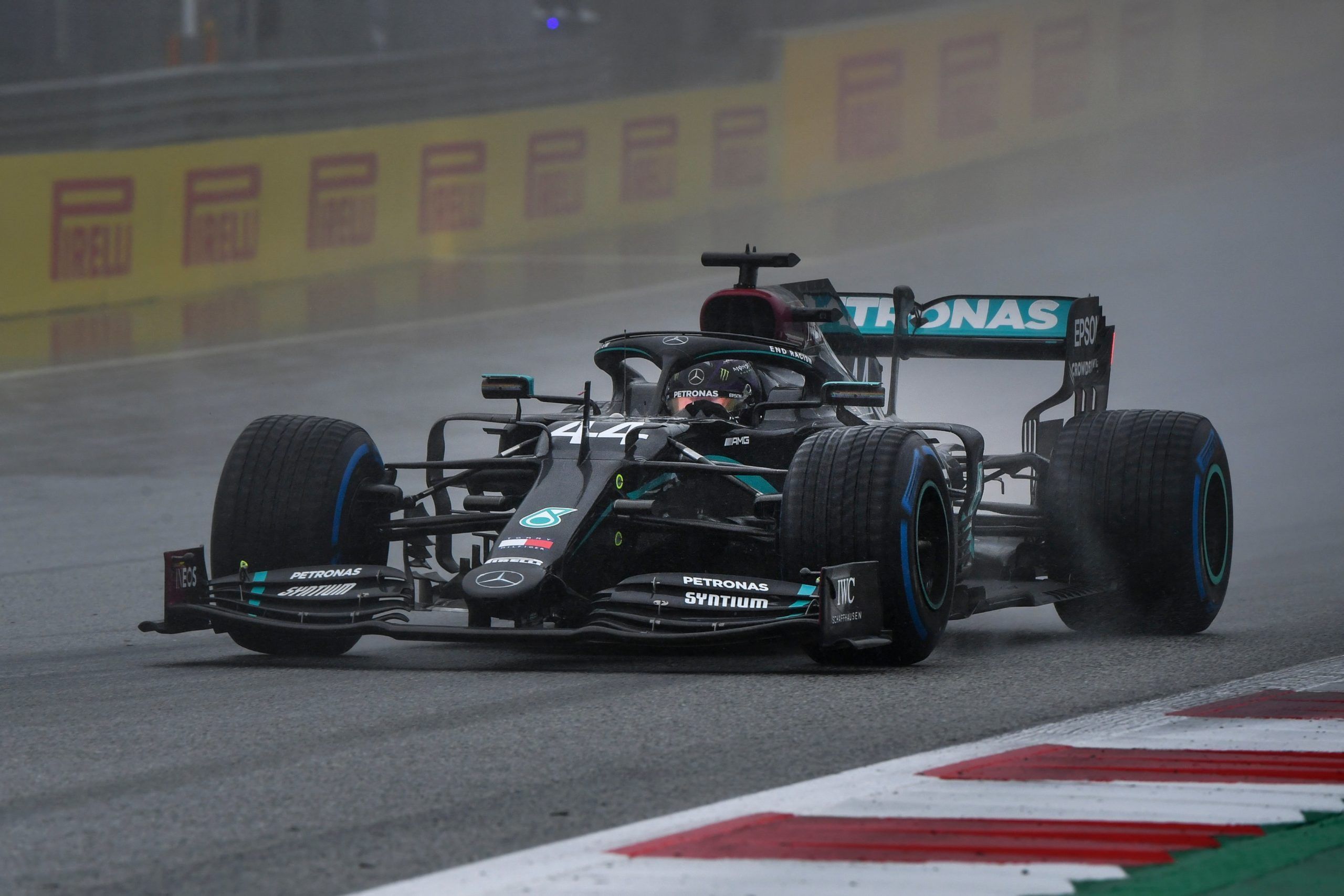 After a lengthy delay, the first part of F1 Styrian GP qualifying started under still wet and slippery conditions as drivers tip-toed around the Red Bull Ring. It was a lottery as expected with multiple going quickest in the 18 minutes session.

It was frantic but Mercedes’ Lewis Hamilton headed the way in a red-flagged session with a 1m18.188s lap as Red Bull Racing’s Max Verstappen was second and McLaren’s Lando Norris third. There was no time set for Haas’ Romain Grosjean, though.

The Frenchman had an off in his out lap – possibly due to brake issues – as the team couldn’t fix whatever the actual issue they had. The red flag was for Alfa Romeo Racing’s Antonio Giovinazzi, who had a spin in the final corner and came to a halt with rear damage.

The strategy was out of the box due to the wet weather conditions as Mercedes’ Hamilton led the way again in the second session with a 1m17.825s lap to be ahead of Verstappen and Norris – which was the same Top 3 as Q1.

It was disaster for Ferrari as Charles Leclerc was knocked out in 11th with a 1m19.628s as he was beaten by Sebastian Vettel by 0.083s, who was 10th. The Monegasque is under investigation along with AlpaTauri’s Daniil Kvyat for an un-aired incident.

The third part in the F1 Styrian GP qualifying session saw multiple change of hands for pole with the likes of Hamilton, Verstappen and Valtteri Bottas going quicker lap after lap. It was drama to decide the eventual pole-sitter in the end.

While looking to beat Hamilton, Verstappen pressed on the gas but spun on his final lap as the Brit then further improved to a 1m19.273s lap time to clinch pole in F1 Styrian GP, as he eventually beat his nearest rival by a mammoth 1.216s.

McLaren’s Norris (1m20.925s) slotted in sixth but is to drop three places to start the F1 Styrian GP from ninth, as a late spin from Red Bull’s Alexander Albon (1m21.011s) put him in seventh, although he will start from sixth.

UPDATE: Multiple drivers were put under investigation post qualifying with Leclerc getting another one along with Perez and Raikkonen. The Monegasque was already under investigation for impeding Kvyat in Q2, while the second offence was red flag infringement.

It was the same for Raikkonen, while Perez got it for yellow flag infringement. The trio were let off as looking at the evidence, they all tried to stop but couldn’t. For the former two, the incident happened at Turn 9 as they couldn’t enter the pits when red flag was shown.

The latter couldn’t slow down enough at Turn 3 as he was committed to the corner. In the second investigation, Leclerc was found guilty of impeding Kvyat at Turn 9-10, where he was made aware of the Russian coming behind him.

However, to start his quick lap, Leclerc pressed on but found another driver ahead. The Monegasque said he couldn’t see in his rear view mirror due to weather conditions but the FIA adjudged that he could have reacted differently still.

As a result, he was handed a three-place grid drop which puts him in 14th for F1 Styrian GP and allows Russell to be 11th, Stroll in 12th and Kvyat 13th.

Here’s what drivers say after Friday of F1 Styrian GP