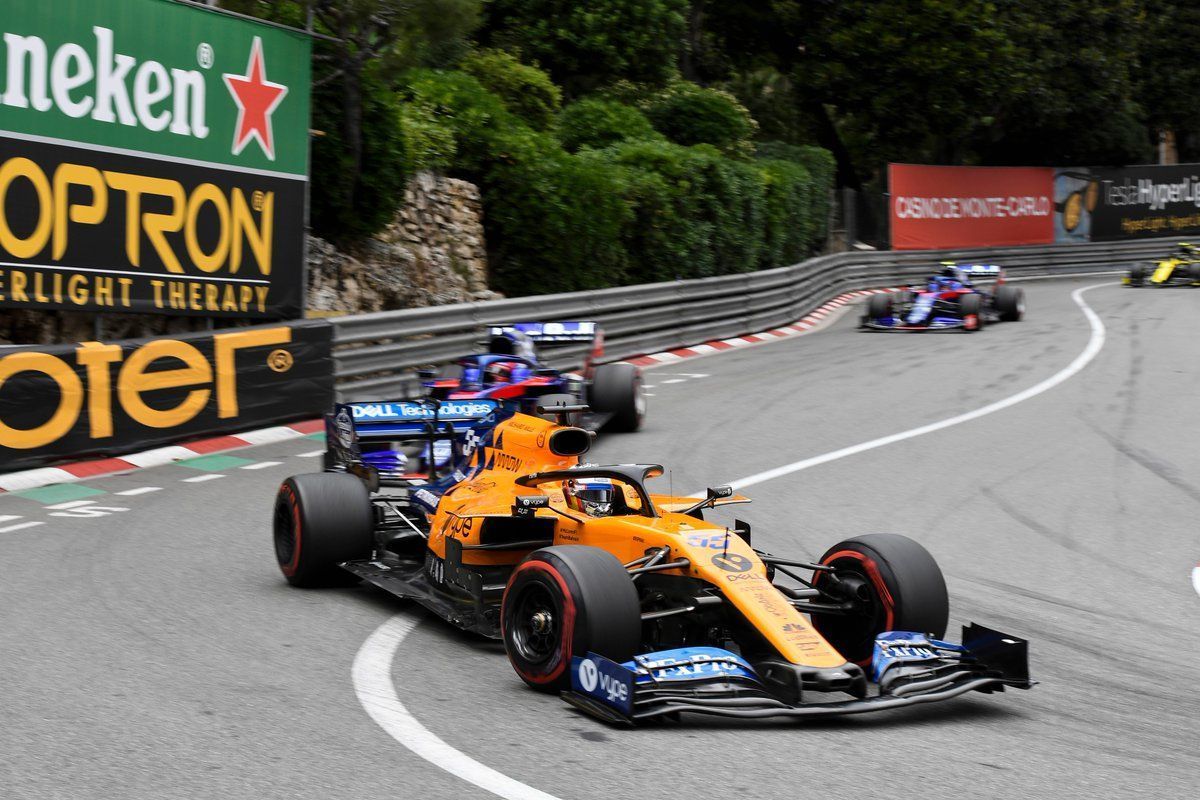 After losing whole of F1 Monaco GP FP1 session due to an issue, Sainz bounced back well to secure a place in the Top 10 in qualifying and then made a supreme start on Sunday to pass both Toro Rosso’s Daniil Kvyat and Alexander Albon, for a solid result in the end.

In a tight circuit like Monte Carlo, the race starts play an important role and Sainz perfected it to gain track position as he slotted himself in eighth behind Renault’s Daniel Ricciardo, Haas’ Kevin Magnussen and Red Bull Racing’s Pierre Gasly.

The safety car decided the fate of the midfield drivers as both Ricciardo and Magnussen made the mistake of pitting which allowed Gasly to take fifth and Sainz slotted in sixth ahead of Kvyat and Albon. Teammate Lando Norris was outside the Top 10.

The Spaniard ran deep in the first stint but not as much as the two Toro Rosso drivers. However, McLaren did a solid job in the pits as well as even after a late stop by Kvyat, the Russian was behind Sainz but it was only by few tenths between the two.

It was then for Sainz to see-through the challenge as even with slightly older tyres, it was for him to hold off Kvyat and Albon on a difficult track to pass to secure sixth and his best result for McLaren, which further solidified its constructors’ position in fourth.

“A very good weekend in the end,” he said to the media. “It was difficult to start with but then we picked up at the right time which was in qualifying and then at the race start, we managed to pick up the two Toro Rossos.

“Around the pit stop, we managed to do some solid laps and jump the rest of the drivers. Both the medium and the soft compounds were graining a lot. For soft, I managed to kind of avoid it.

“When everyone pitted behind the safety car, I had 10-12 laps of non-graining left to put some good laps together and then right towards the pit stop, I think I did the fastest lap of the race with the graining, because everyone must have been struggling.

“I managed to put together a good lap. It actually opened the graning and after that it was going downhill, I was just trying to defend the two Toro Rossos, but fortunately I managed to do it.” Looking ahead, Sainz feels McLaren needs some work in low-speed area.

“If we compare to Mercedes, we are still very far but as always we are pushing.” Sainz’s defence wasn’t a lone work as teammate Norris was also deployed at the back to hold off the likes of Ricciardo and Magnussen from coming back in the Top 10.

The British racer’s race was already compromised due to a bad start which left him to play a second fiddle as McLaren pushed to secure more points at the front. Norris almost made it in the Top 10 himself but fell short by a position in the end.

Nevertheless, it has been a good step forward for McLaren so far in 2019. The team sits fourth in a closely-packed midfield – even though it is only the first part of the season, handy points accumulation now will be useful by the end of it.