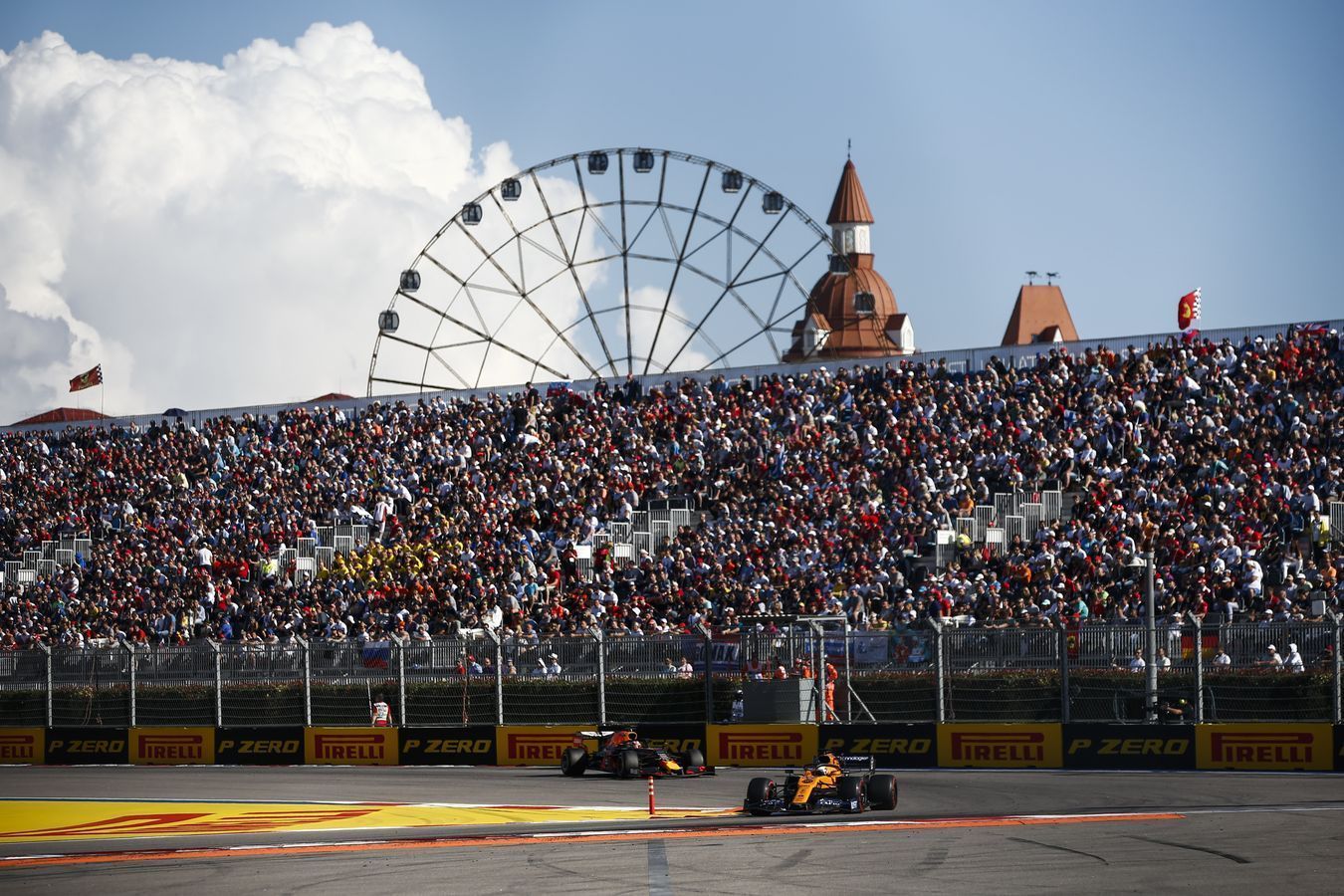 Both the McLaren drivers had a good launch off the line in F1 Russian GP at Sochi Autodrom as Sainz even got ahead of Mercedes’ Valtteri Bottas but had to give away soon with the pace of the German manufacturer.

He later on lost out to Red Bull’s Max Verstappen and also Albon, who came charging through from the pitlane. The Spaniard had the Thai behind for few laps but it wasn’t worth it since Perez was not far off from the two, who was his main rival.

The Racing Point showed some good pace in the race and Sainz was preparing a defence against the Mexican, who was on a two-lap fresher medium compound than the McLaren driver. Perez had already passed Lando Norris early on.

“Obviously losing to Albon, it didn’t help but the Red Bull on the softer tyre was a much quicker car this weekend and was quite difficult to keep behind,” said Sainz to the media. Eight laps to the end, Perez with a much quicker Racing Point, I thought I’ll give him an eight-lap defence.

“In the end if Perez comes from behind, they have DRS and the Racing Point is so quick on the straights, it would be bad to lose P6 that you have earned after such a tough weekend and a good race, I think it made sense to give it a go to see if we can keep Albon behind but it didn’t work.”

He finished sixth to take away some good points in the fight against Renault as McLaren passed the 100 points barrier. The Spaniard was chuffed with his start where he battled the Mercedes but he returned to reality soon after getting passed quickly.

“I have been getting really good starts in the whole season, so I knew I could start well with the tow of Vettel in a really fast Ferrari and then have a show fighting with the Mercedes in Turn 1 and Turn 2, which we managed,” he said.

“It was nice thing because at least we showed we were there. Unfortunately, we came back to reality as they passed us and it was all about controlling the race, which I think we did really well all the way through and best of the rest this weekend was what we could do.”

Owing to his comments pre-race of not being shown on television as much or the midfield not being shown enough, Sainz felt he didn’t deserved to shown in Russia, owing to the lonely race he had apart from the start and a brief fight against Albon.

While he returned to points, McLaren teammate Norris wasn’t far off in eighth as he gained a place on Haas’ Kevin Magnussen after his penalty. The British racer lost to the Dane due to Virtual Safety Car but the penalty helped him take back the place.

“It has been a positive day for the team with good points,” he said. “Carlos and I both made good starts and gained positions. My first stint was reasonably good with decent pace, but then the VSC after my pit-stop shook things up.

“Cars came out of the pits from the VSC who were slower, preventing me from pushing as much as I wanted to, and then I was vulnerable to cars behind on fresher tyres. It was tough to keep the Renault and Racing Point behind. But overall a good weekend with more points for the team, a good reward for their hard work.”