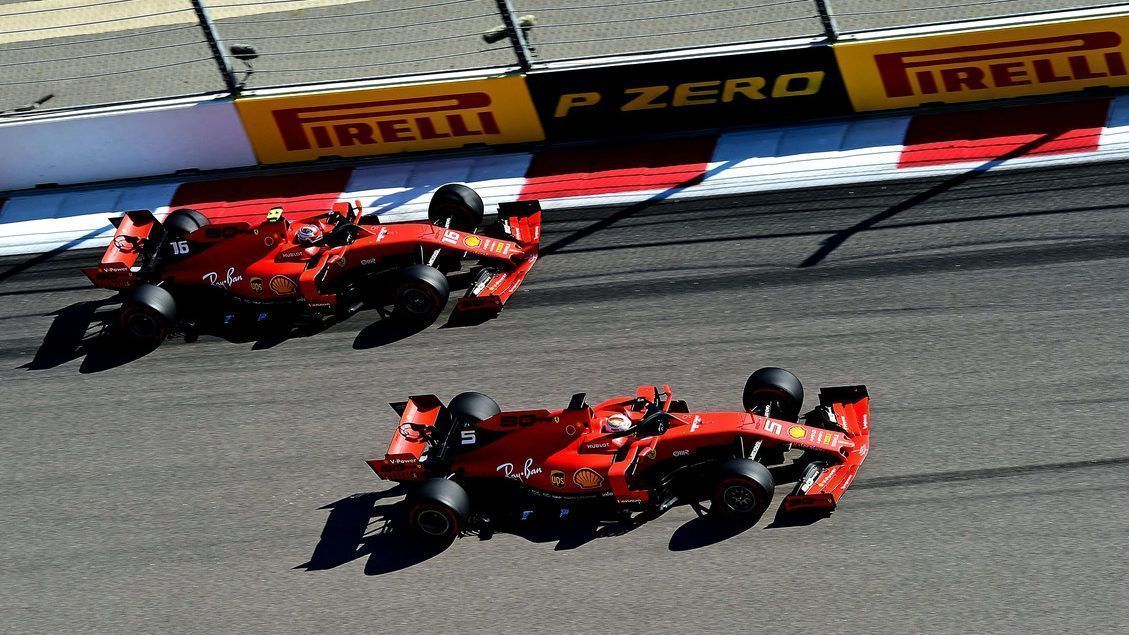 It turned out to be a sour F1 Russian GP for Ferrari as Mattia Binotto, Charles Leclerc and Sebastian Vettel were left to explain the messy situation.

With fourth consecutive pole for Leclerc in F1 Russian GP at Sochi Autodrom, Ferrari were eyeing its fourth victory on Sunday and it looked likely after they led the way at the start with a 1-2.

It was Vettel ahead of Leclerc though which initiated a lengthy process of radio exchanges on a pre-race arrangement, where it was for Leclerc to provide Vettel slipstream so that he clears Mercedes duo.

However, Vettel had enough pace to eventually get ahead of Leclerc which created the whole scene. Ferrari asked for a swap but the distance was large for them to try as they left for it to be done at a later stage.

The radio chat continued still as Leclerc eventually got ahead in pit stop but Vettel had MGU-K failure which disrupted the run for Ferrari as the Monegasque lost out to finish only third, behind the two Mercedes drivers.

Speaking about the pre-race agreement, Ferrari team boss Mattia Binotto was pretty clear on it. “Looking at the past races in Russia we know
that its important to be ahead at the first lap, because normally if you start first, you may finish first,” he said.

“As a team obviously the victory was key, so we decided that the most important thing for us was to be first and second at the first lap, because by being first and second we would have somehow control and manage the pace and control the positions.

“Which is what was happening, because being first and second as a matter of fact we were controlling the race, and without any reliability issues certainly we would have kept positions after the pit stops.

“Being first and second was the first objective. How can you do that when you start first and third? Certainly protecting the first position as well as making sure you gain a position and being second.

“That was what we agreed, and discussed, by giving the slipstream to Seb and not defending the position would have given an advantage to Seb which later on in the race we would give back by swapping the cars. So that was the deal.

“What happened, I think what happened was exactly what was explained, they got a good start, both drivers, they both made a similar start, they were on the soft tyres, we got a good speed, Charles stayed on the left, Sebastian jumped very soon Hamilton and was naturally I would say in the slipstream of Charles.”

Elaborating on the radio call, Binotto added: “Obviously looking at the video, looking at the start, the start went as planned, and therefore we thought it was right to ask Seb to swap positions.

“Eventually the two drivers may have different opinions by driving the car, but that’s something which we may discuss with them. We initially asked Seb to give the position back, but fair enough to say at that stage of the race maybe Charles was not close enough, and we would have lost some time on track.

“Later on Seb was quite fast and gained some track advantage on Charles. We knew that let me say we could have decided to do it later on. The undercut was not for the reason for giving back the position to Charles, the undercut was because Charles stopped because he had worn tyres left rear was starting to be worn,so it was the right moment for him to pit.

“We knew as well that if we stopped both our cars there we would have been vulnerable on safety cars, by leaving the lead to Hamilton. We tried to stay out as much as we could with Seb, simply to protect in case of safety cars at that period of the race.

“Then again, Seb’s tyres were worn, he called for it, it was the right moment to pit, he pitted and as a matter of fact Charles was ahead, Seb was behind, but the race was still not over, and there would have been plenty of opportunity to decide then what would have been the best option later on.”

On the driver side, Vettel was tensed but relaxed at the same time with the situation unlike Leclerc but towards the media, they handled the questions pretty well.

“I think on my side it’s best if I don’t say anything,” said Vettel. “I think I kept it that way in the TV pen. I think Mattia gave an explanation which is valid, so, leave it there. I do accept Mattia’s explanation.”

He did not give too much on the late pit call as well despite having worn tyres as he eventually lost to Leclerc before the retirement. Leclerc, on the other hand, repeated his words mostly regarding the agreement.

The Monegasque has trust on Ferrari and Vettel still, even though the swap didn’t work out in the first go. He agreed that the safety car made it tricky and the gap then was too much to get the swap work.

“I did 2-3 laps, I think quite close, trying to push to stay as close as possible, and then it was quite difficult to stay close to him, especially in first and second sector,” he started. But then I dropped back.

“I think everything was respected. At the start, obviously I went to the left to give Seb the slipstream. I knew he would overtake. We knew that. Then we just had to do the swap back, and we did it at the pit stop later on in the race and then our race went downwards.

“I think the situation was quite tricky [with the no swap]. There was a Safety Car straight away, so then it was quite difficult. I tried to stay as close as I possibly could for two or three laps but then it was very difficult to follow, especially first and second sector.

“Tyres overheated and then I dropped back a little bit. But then I was, as I said on the radio, I had one hundred per cent trust in the team to do it themselves, as it was agreed before the race, and that’s what they did at the pitstop.

“I think the trust doesn’t change and we need to trust each other, Seb and myself, because I think it’s usually important for the benefit of the team in some situations to know that you can count on the other car – I mean in both ways. I think it’s very important but yes, the trust is still here.”