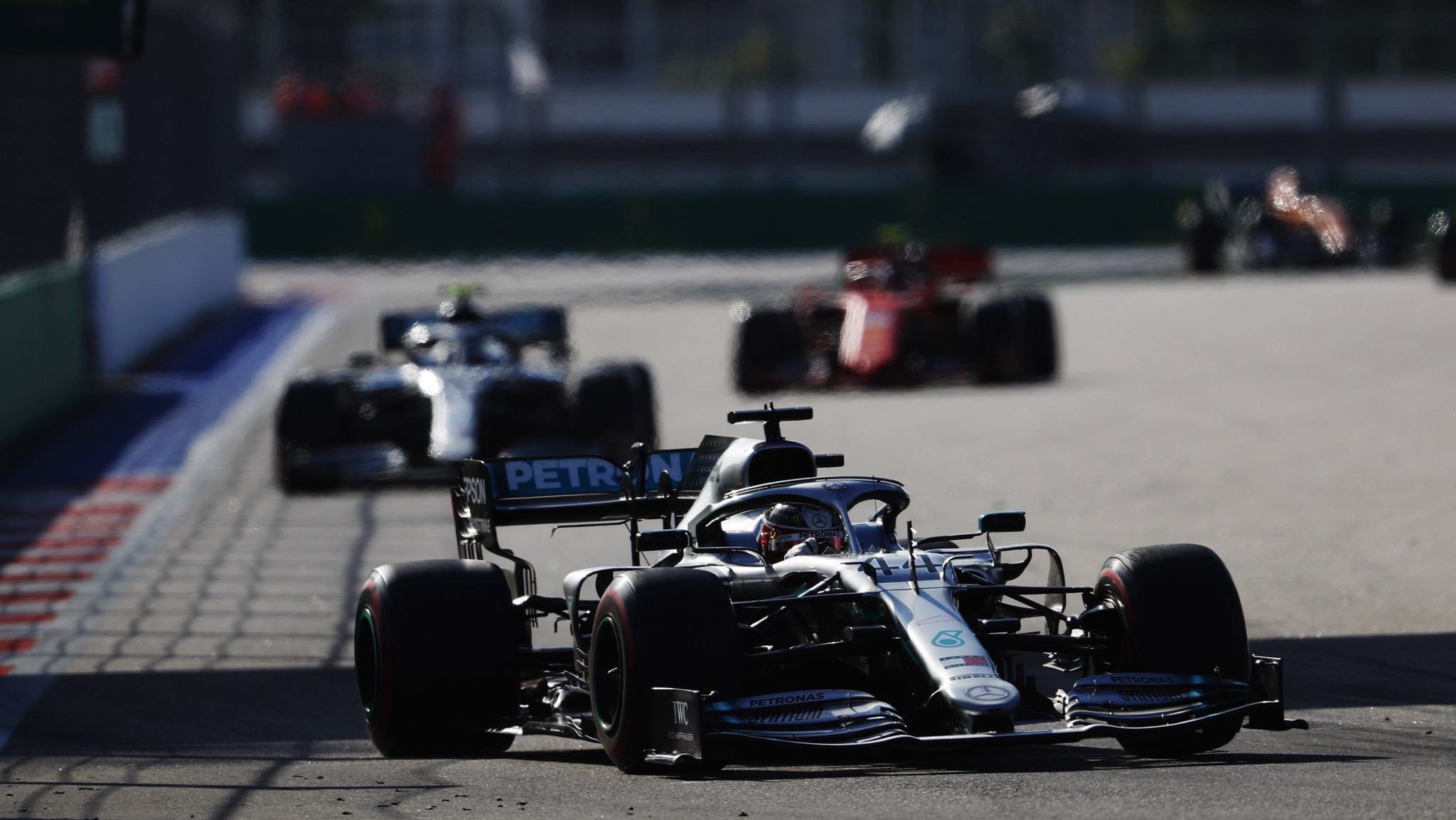 Lewis Hamilton led an unlikely Mercedes 1-2 in F1 Russian GP from Valtteri Bottas after troubles for Ferrari with Charles Leclerc in third.

It was a clean start at the head of the field in F1 Russian GP at Sochi Autodrom as Ferrari’s Sebastian Vettel took the lead from pole-sitter Charles Leclerc in Turn 2 with Mercedes’ Lewis Hamilton in third.

The McLaren drivers, in fact, challenged Mercedes with Carlos Sainz getting past Valtteri Bottas and Lando Norris close behind in sixth. Racing Point’s Sergio Perez was seventh from Red Bull Racing’s Max Verstappen.

The Top 10 then had Renault’s Nico Hulkenberg and Haas’ Kevin Magnussen as their teammates did not have the best of Lap 1 with a clash involving Alfa Romeo Racing’s Antonio Giovinazzi.

Grosjean left room in the right-hander with Giovinazzi then sandwiched with Ricciardo on his right. Both Grosjean and Ricciardo hit the either sides of Giovinazzi, with the Frenchman retiring immediately.

Ricciardo suffered left rear puncture as Giovinazzi also pitted to have his tyres and front wing changed. It was more for Alfa Romeo as Kimi Raikkonen was handed a drive-through penalty for jump start.

Meanwhile, at the front, it was games being played already as Ferrari initiated a swap as per a pre-race plan but it didn’t happen as the gap between Vettel and Leclerc was quite big to do so.

The radio chatter continued on but eventually they maintained track position with Hamilton in third as Bottas was fourth after clearing Sainz. Behind, Verstappen was up to fifth after getting Perez and McLarens.

Perez lost out to Hulkenberg but the German had a horror pit stop which dropped him way behind. Thing started to settle down at the front as Ferrari decided to perform the swap in the pits.

It worked as Leclerc pitted before and got the undercut on Vettel. However, Ferrari had a double whammy with Vettel retiring due to MGU-K failure which initiated the Virtual Safety Car period.

It worked in favour of Mercedes with Hamilton getting track position ahead of Leclerc and Bottas with Red Bull’s Verstappen in fourth ahead of McLaren’s Sainz as Haas’ Magnussen gained places to be sixth.

He moved ahead of Lando Norris with Racing Point’s Perez and Lance Stroll in eighth and ninth and Red Bull’s Alexander Albon running 10th. The VSC turned into full safety car after an off for Williams’ George Russell.

Ferrari decided to pit Leclerc under the safety car for a fresh set of soft tyres as he dropped to third behind the Mercedes drivers. With Russell, Williams retired Robert Kubica as well with Ricciardo stopping too.

As Leclerc chased the Mercedes drivers as Albon climbed up to sixth with Perez gaining on Norris in eighth and Hulkenberg getting 10th from Stroll. It was too much at the front though with Mercedes just holding on.

Hamilton eventually took an unlikely win in F1 Russian GP, his first since the Hungarian GP, after the troubles that hit Ferrari. It ended up being a Mercedes 1-2 with Bottas in second to keep their dominant run in Russia.

Hamilton also had the fastest lap as Ferrari and Leclerc had to be content with third with Red Bull’s Verstappen in fourth ahead of Albon, who came through from the pitlane to end up inside the Top 5.

McLaren’s Sainz was sixth with Racing Point’s Perez in seventh as Norris passed Magnussen for eighth, with the Dane scoring some handy points for Haas as Hulkenberg rounded out the Top 10.