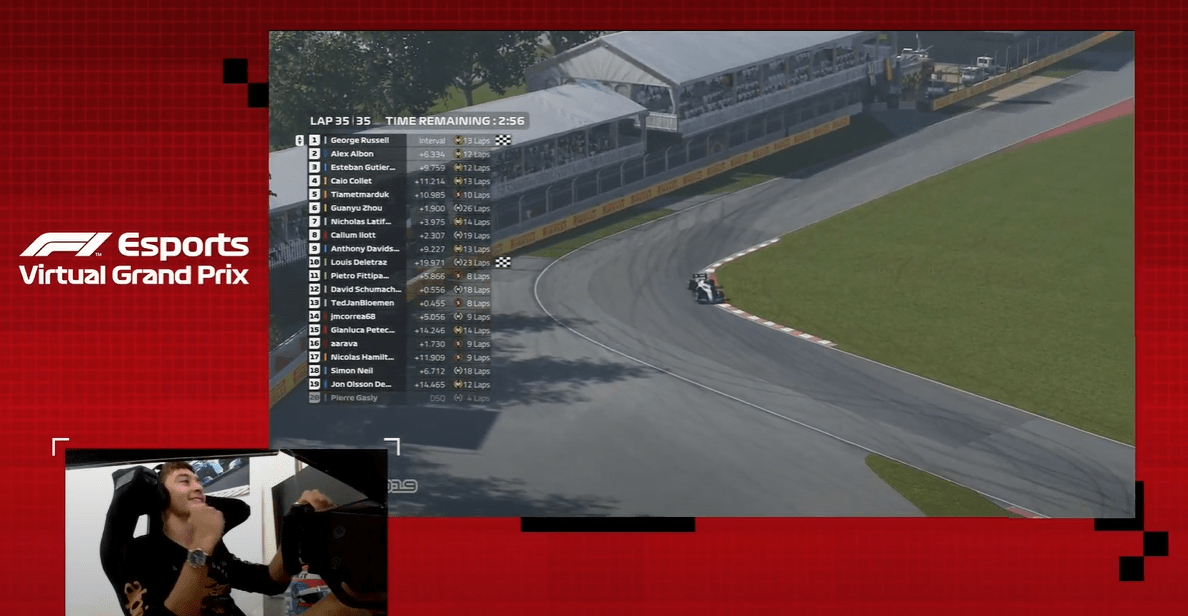 The F1 Virtual Grand Prix (Virtual GP) was back for the final round held at Circuit Gilles Villeneuve in Canada with George Russell winning the race and the title.

The Virtual GP returned for the final time for the Canadian round, which was held at the Circuit Gill Villeneuve on the F1 2019 game. There were some changes in the driver line-up too with the current grid of drivers up to eight but they had a former racer in.

Among the drivers returning from Azerbaijan Virtual GP round were Esteban Gutierrez (Mercedes), Thibaut Courtois (Alfa Romeo), Ben Daly (McLaren), Pietro Fittipaldi (Haas) and Louis Deletraz (Haas) with plenty of new racers in for the penultimate round.

Among them, Ferrari had Gianluca Petecof, Renault having Caio Collet as Red Bull went for Biffy Clyro, Racing Point with Ted-Jan Bloemen and AlphaTauri had Simon Neil. Points leader Russell took pole from Albon and Latifi for the F1 Virtual GP finale.

It was a good start from Russell but Albon nearly lost second after being spun around before he managed to get going as he led Latifi, Gutierrez and Collet in the Top 5. A collision in the mid-pack dropped Hamilton, Deletrez and Gasly to the back.

While the leaders had their places more or less sealed, Latifi lost third to Gutierrez with the Canadian dropping to the second half of the Top 10 with Zhou getting past Collet to be fourth and fifth respectively. Gasly, meanwhile, was disqualified due to multiple penalties.

Up front, there was no stopping Russell as he took the F1 Virtual GP title with his fourth straight victory in Canada as he led Albon and Gutierrez in a repeat of Azerbaijan podium. Collet and Daly completed the Top 5 positions after the latter passed Zhou.

Latifi ended up seventh after 35 laps of racing as Ilott, Davidson and Schumacher rounded out the Top 10 positions, with Fittipaldi in 11th ahead of Deletraz, Bloemen, Correa, Petecof, Aarava, Hamilton, Neil and Clyro.

Here’s where you watch it in full: https://www.youtube.com/watch?v=anMBuBZMcwY

Here’s how Round 7 of F1 Azerbaijan Virtual GP went