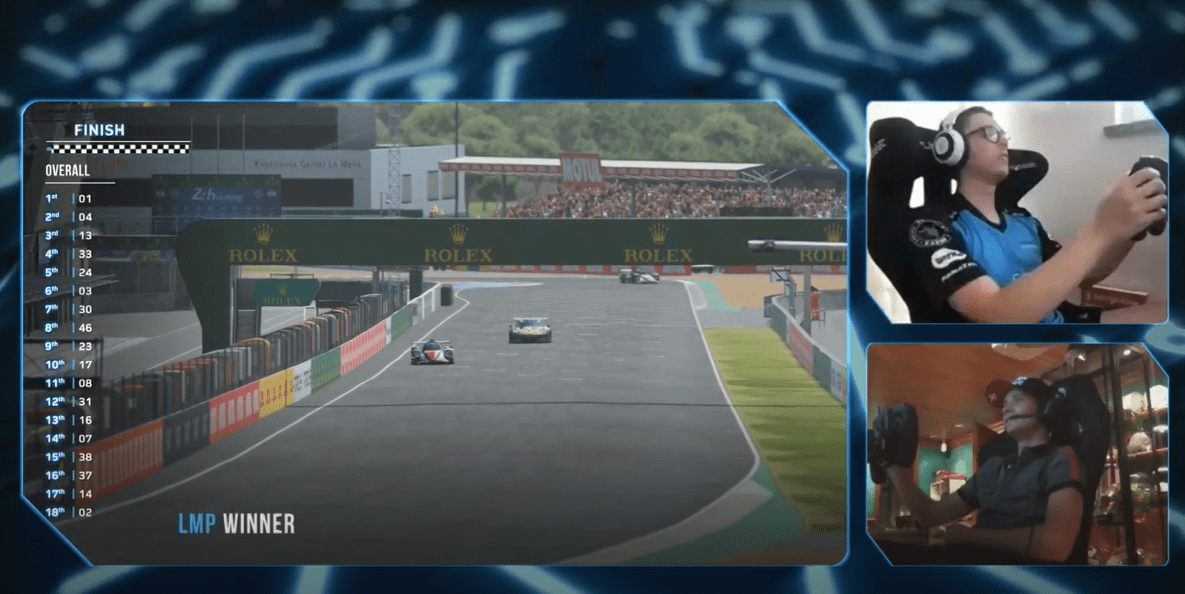 The Virtual Le Mans 24 Hours was a success with Rebellion Williams ESports outfit winning in the lead LMP2 class amid host of ex and current F1 drivers competing.

Despite the two red flags – where they faced server problems – the Virtual Le Mans 24 Hours on rFactor2 was a success as #1 Rebellion Williams ESports team took the win in lead LMP2 class with Louis Deletraz, Raffaele Marciello, Nikodem Wisniewski and Kuba Brzezinski driving.

They completed 371 laps in all as pole-sitter #4 ByKolles – Burst ESports ended up second after a gritty fight with the sister #13 Rebellion Williams ESports team. Interestingly, the Top 3 teams were the only ones to finish the event in the lead lap.

The GTE class, meanwhile, had #93 Porsche win the category comfortably ahead of a lap down #95 Aston Martin and #80 R8G ESports Team – the latter headed by Romain Grosjean, even though the Frenchman did not drive the Corvette.

Meanwhile, looking at the F1 contingent, it was a mixed run for all the past and current drivers. #20 Team Redline in the LMP2 class comprising Max Verstappen, Lando Norris along with Atze Kerkhof and Greger Huttu retired after 11 hours.

Verstappen spun at Porsche Curves as the team faced connectivity issues, which ended its journey. But the second red flag allowed them re-entry but without the two F1 drivers as they eventually finished 25th in the standings, completing 354 laps in all.

Staying in the same category, Pierre Gasly drove for #24 Veloce ESports 1 team together with Jean-Eric Vergne, Jarno Opmeer and Isaac Gillissen. They had a relatively trouble-free run and stayed with the leaders to finish a solid fifth with 370 laps in all.

Among other big names, Fernando Alonso along with Rubens Barrichello, Olli Pahkala and Jarl Teien in the #14 FA/RB Allinsports faced early troubles as well where they were locked out of the game. They were back in the game after first server issue.

Over in the GTE category, Charles Leclerc was a big name with Antonio Giovinazzi driving the #52 AF Corse Ferrari alongside Enzo Bonito and David Tonizza. They had multiple troubles with the server and lag too where they eventually finished 46th with 324 laps.

Here’s the Twitch streams where you can watch part of Virtual Le Mans 24 Hours: