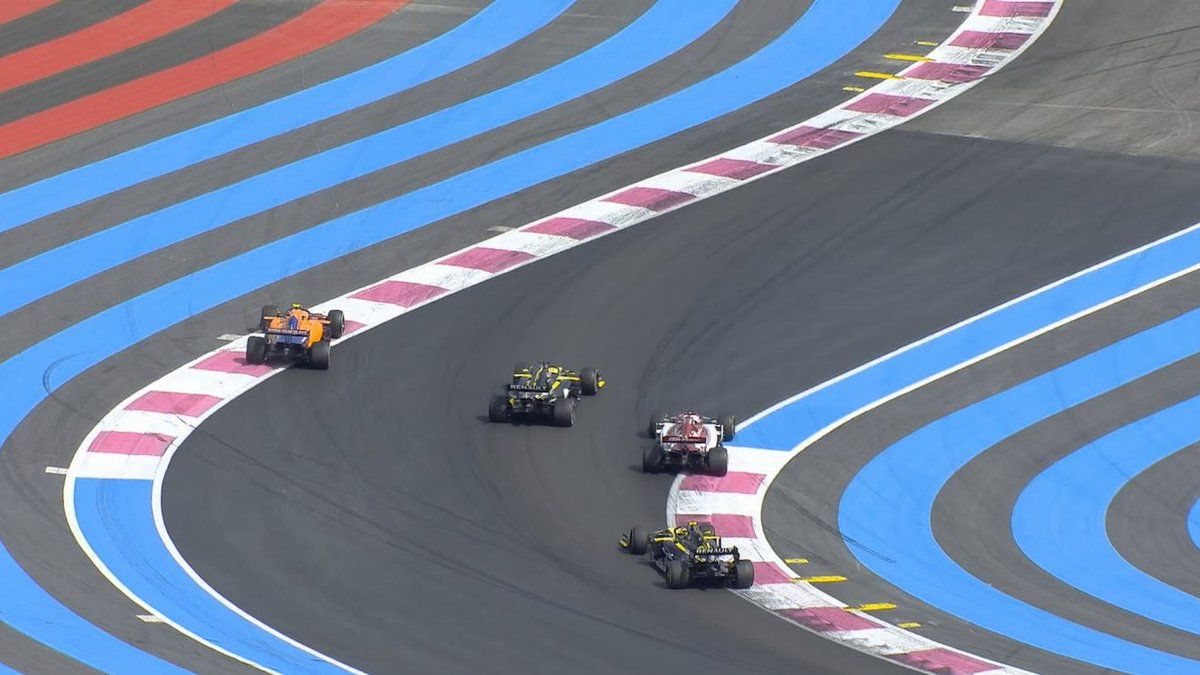 Alfa Romeo Racing and Kimi Raikkonen were back in points in F1 French GP as the Finn enjoyed the tussle against Renault’s Daniel Ricciardo & Nico Hulkenberg and McLaren’s Lando Norris.

The F1 French GP at Circuit Paul Ricard wasn’t as exciting as Canadian GP but there was some drama on the last lap when Norris was left defending seventh place against Ricciardo, Raikkonen and Hulkenberg, while battling through a hydraulics issue.

In fact, the problem with Norris’ car allowed the three drivers to close in. It was all or nothing for Ricciardo in the chicane when he tried a move on Norris but he went off and re-joined quickly, which sent Norris off in the entry of the next corner.

Their tussle allowed Raikkonen to sneak past on the inside of Raikkonen but the Australian came back on the straight to take the place back. He was off track when he initiated the move and eventually went past him to end up seventh with Raikkonen eighth.

Behind, Hulkenberg got ninth as he fended off Norris, who was relegated to 10th after seventh looked most likely. There was a lengthy discussion post-race as the stewards held Ricciardo responsible for both the incidents with Norris and Raikkonen.

He was handed two five seconds penalty which dropped him to 11th as Raikkonen was seventh, Hulkenberg eighth, Norris ninth and Red Bull Racing’s Pierre Gasly 10th. Ricciardo was naturally not very happy with the penalty and even Mercedes’ Lewis Hamilton agreed.

The reactions were different but all four involved had good fun, calling it as the much needed entertainment that the F1 French GP required. “It was not too bad I think,” said Raikkonen. “At the start I made a small mistake off the line.

“But luckily I didn’t lose too much and then I could fight back in the next few corners. I think we were in a strong position after the start with the hard tyres and then we had to hold Hulkenberg back from the beginning to the end of the race.

“In the end, there was quite an intense battle on the last lap which was fun. It’s really good that we could fight against other cars in the midfield and be up there. We had the speed and we got a good result in the end.”

There was clear disappointment for Ricciardo though, who didn’t want to rant on Twitter. “It’s clearly disappointing to drop outside the points with a post-race penalty, especially at the team’s home race,” he said. “The last lap was a lot of fun, we had a fight and I enjoyed it. I’d rather give it a go than not try at all.

“I am sure the French fans and the people at home liked watching. It’s a shame to be penalised for it, but we’ll aim to move on from that as quickly as possible. In terms of the race, I feel like I missed out a little bit at the start, especially after a really good launch off the line.

“I braked too early for turn one and that was too conservative looking back. That made the rest of the race hard work, but we kept it clean and smooth from there. There are still a lot of positives to take and we’ll be looking for an immediate response in Austria.”

For Norris, he lost out to Carlos Sainz at the start as he was on the inside but held well until the hydraulics issues – affecting braking, steering and shifting – which dropped him back. “I had a good start, same as the guys ahead of me,” he said.

“Being on the inside, I got boxed in. Carlos managed to go around the outside, which was something I couldn’t have done from my starting position on the inside. The rest of the race was good, I had good pace and was just managing the gap to Carlos.

“A hydraulic issue, around 20 laps from the finish, cost me a lot of time and made the car really hard to drive. The steering wheel went really heavy and I lost the power steering. It was really tough, I did my best not to lose places.

“But it was too much of an issue to hang on as I had lost so much pace.” The results meant McLaren is fourth still with 40 points as they extended the gap to Renault (32) to eight now as Alfa Romeo gained places to be seventh and is tied on 19 points with Racing Point.