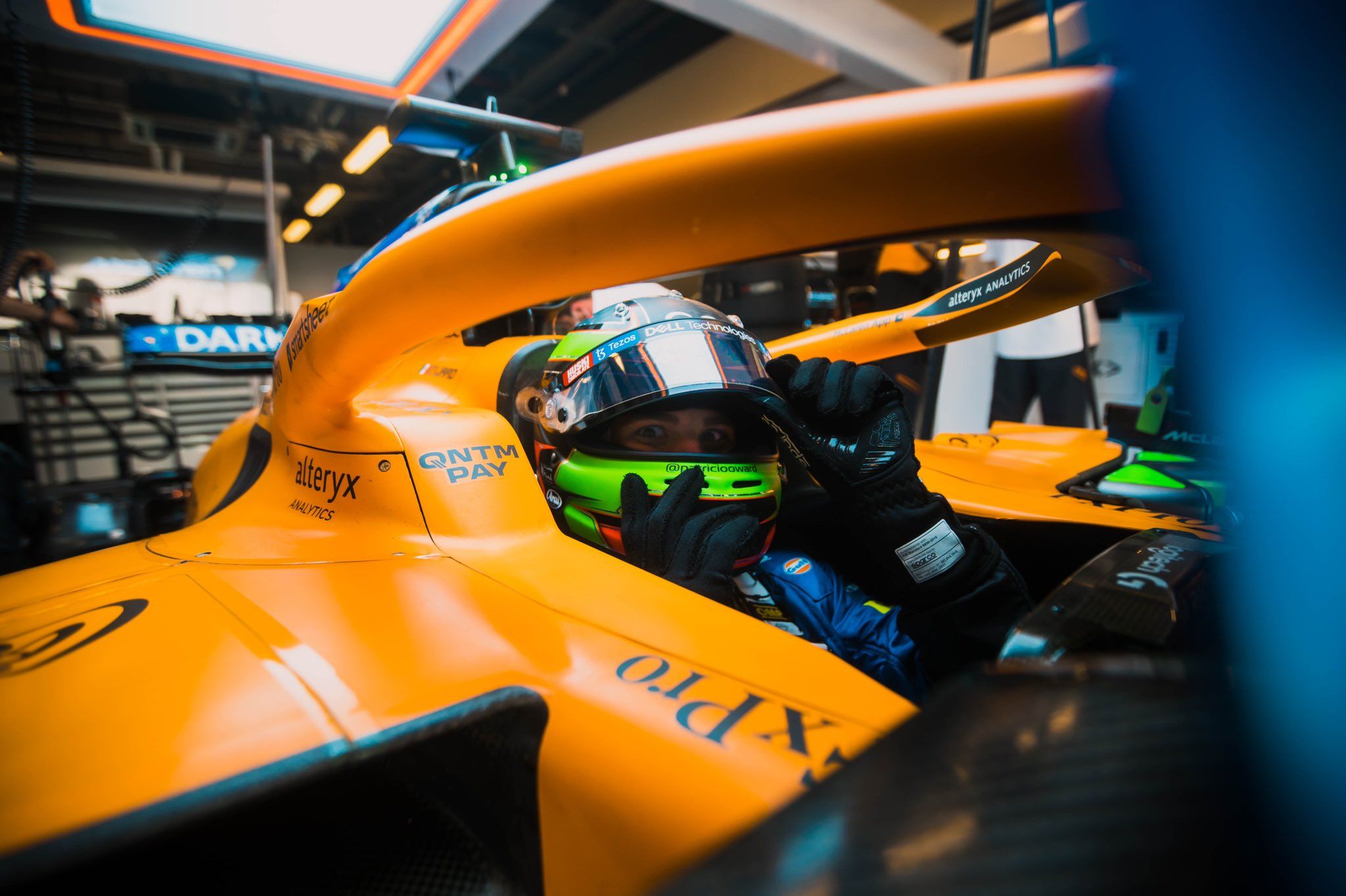 Patricio (Pato) O’Ward further expands on his McLaren F1 experience from December as Zak Brown sees the appetite in him for more.

O’Ward tested a McLaren F1 car at Abu Dhabi circuit two days after the final grand prix of the season. He drives for its IndyCar team and has fourth and third respectively in the last two seasons where in the latter, he was fighting for the championship.

He still only 22-years of age, but it seems he has been around for a long time. McLaren themselves were coming off a successful Grand Prix season. The deal for the test was a win in the Indy Car series in 2021 and he would get the opportunity.

But in short he actually doubled the deal achieving two wins during the season. And the subsequent test then opened the gates for a possible FP1 outing in 2022 as per Zak Brown if Andreas Seidl and co are fine with running the Mexican.

Looking back at the test, O’Ward elaborated more on his runs and how it became difficult with regards to his fitness – especially the neck – by the end of it. He added on his past experience of driving a F2 car and how F1 is easily his best experience when he spoke to media including FormulaRapida.net.

O’Ward: “I did qualifying laps, mostly towards the end of the day. I’m a bit annoyed because I know I had a bit more pace than what I ended with. With the soft, putting a lap together, I got a pretty solid run on the mediums which is the C4 but with the C5, I did three flyers on a set but I did my best sectors with one lap and then the other lap different sectors, so I didn’t get one lap of putting everything together which I know this will come with time and just knowing the car and the tyres a bit more and it just feels so good like it feels, the change of direction, the downforce the stopping power.

“It’s just unlike anything I’ve driven before, nothing comes close to this, not even close, like its unbelievable. At the end of the day, another part where I think I probably need to get everything together on one lap is because I was about to lose my head, my leg like is destroyed. In the morning I got to a good point but then we did some race running before I did all my quali runs in the end and as soon as I put those softs on going through those fast corners my head was about to just I mean.

“Well the issues was for me and I know where I lost some time was in corners where you are limited by your neck strength which I knew was going to be a problem at least at the end of the day because this is completely different, its nuts compared to anything else that I have done that is available to drive out there so yeah my last few laps were definitely, My last few laps, I was looking down with my eyes, trying to see where I was going at 180MPH or 150MPH. I mean turn 9 it was just straight down.”

Past cars to this, was it more than anything –

O’Ward: “More, a lot more than what I thought it be would. I had a past experience with a Prema car in F2 which I truly really struggled getting to grips with but honesty I wasn’t prepared at all but the guys here at McLaren prepared me in and given everything to me to kind of be prepared for what to expect. But I have to say I felt extremely at one with this car, extremely at one, I felt really happy with the way that it likes to get driven with the way that it reacts to certain things.

“Obviously, whenever you’re in race trim is completely different to qualifying trim but from my experience of watching F1, my favourite day is qualifying because the cars look crazy, they look so impressive on screen which honestly onscreen they usually look a lot less, the screen makes it a lot a lot less than what they do in person and being in the car like feeling all the different things the car can give you, just the amount of G breaking on the fast corners, it is unbelievable, it’s addictive. I mean I got out of the car and I kept wanting to go in to feel it again because its such a, everything works, its so smooth and gentle and when you want to go you can throw the thing around and the thing just sticks.”

O’Ward: “This is the best experience I’ve ever had in a race car in my life. I don’t think anything has come close to it in terms of driving in terms of driving and feeling what it’s capable of and feeling its limits. Nothing comes close to this because the feeling for example from an Indycar is crazy but then you get into this and the way that its able to do everything so fast and everything is so compressed, its like a video game. Its unreal but I have to say to extract the last bit of it, it takes a lot more commitment into the corner like I didn’t get to the limit in certain areas, I did in others but in other areas I didn’t. But this is normal it’ll take time to know what its capable of to really get there and not go over the limit. I didn’t want to just have big balls, send it and end up in the wall.”

For O’Ward, it was like Christmas had arrived 10 days early. He enjoyed it, he looked forward to it and was confident on the day but he also took to it like a duck to water. Separately, he has indicated he would love to make the move to F1 but also believes it has to happen in the next couple of seasons.

It is a bit harsh on himself perhaps but it’s a likely occurrence. McLaren drivers Daniel Ricciardo and Lando Norris have multi-year deals and there will be many other drivers available in the lot for the team to choose from. Brown was also mightily impressed with his test and his attitude as well.

“I think any racing driver, Formula 1 car driver that is, wants to compete in Formula 1 with it being the pinnacle,” said Brown to media including FormulaRapida.net. “So, I thinks he just wants to do a good job. He’s definitely in our IndyCar team in 2022, he’s with us for the long term, so we’re going to take it one step at a time but I can’t imagine it’s not going to whet his appetite to say, I’d like to do that again.”

He has the speed, the skill, the ambition, confidence and enthusiasm for the job and so much so that it’s easy to believe that he cannot wait to get behind the wheel again. A decent IndyCar season or two could be the makings à la Villeneuve and Montoya.