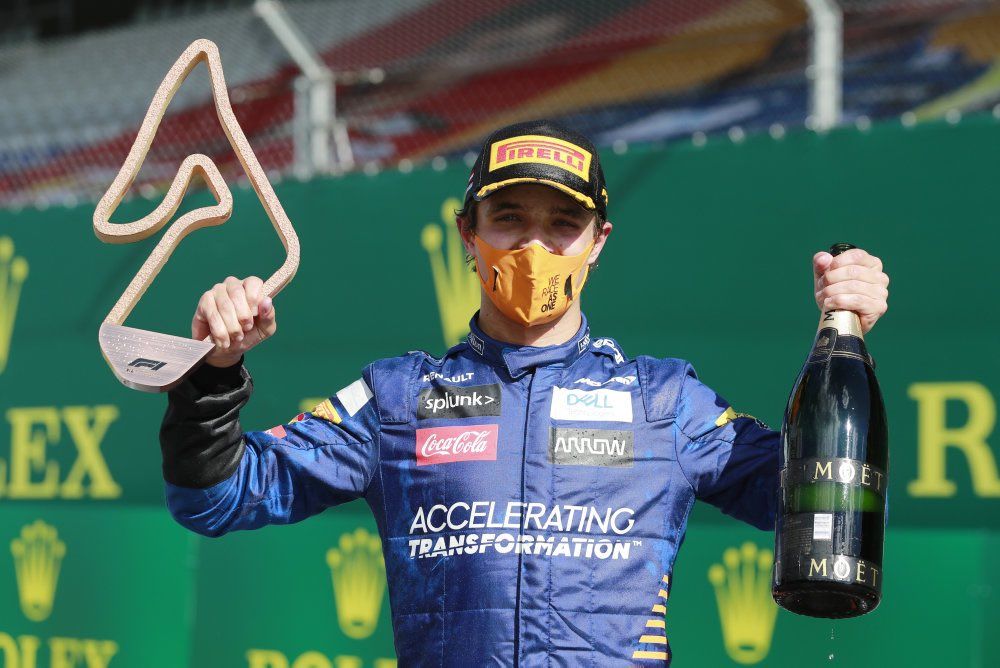 McLaren’s Lando Norris reflected highly about the F1 Austrian GP where he scored his first point on the final lap after an aggressive drive/passes.

A crucial element of the incredible F1 Austrian GP drive from Norris was the start. After qualifying high up on the grid and having his position bettered by the demotion of Mercedes’ Lewis Hamilton, he maintained his rank within the leading pack for the early stages of the race, and lost places only to cars considerably faster than his, crucially staying ahead of the packed mid-field fight.

Reflecting on his first few short laps, Norris said he initially had worries about getting off the line after some practice starts, and was happy to get away well. “It’s cool to be able to race at the front, especially off the grid,” said Norris. “I was a little bit nervous, I’m not going to lie. All of my practice starts went pretty terribly.

“I hit anti-stall on every single one actually so I was dreading it, kind of, but I knew Max was on the medium so I knew I had a good chance against him and looking back at last year we were the best starters of the whole grid. I was confident, still, at the same time but lacking a bit of confidence in myself and not making sure I hit anti-stall again and yeah, I had a good start compared to Max and similar to Valtteri, I think.

“So it was high enough, I had confidence in what I needed to do and achieve and racing with these guys, but at the same time we knew from the very beginning who we were really racing against, even though it ended up as it did I think we definitely weren’t as quick as the Ferrari or the Racing Point today so. We managed to beat three of them, two Racing Points and one of the Ferraris, so I’m very happy with that,” said Norris, who also touched upon his fighting that took place following his successful start.

The Brit had battles on-track with the likes of Ferrari’s Charles Leclerc and even Racing Point’s Sergio Perez in the road to his eventual podium finish. Norris provided insight on a few of these, telling of what went on inside the cockpit during some of these duels.

“I think the race highlighted that we had to keep on pushing through the whole race. Obviously it’s nice when you have a car which is compared to last year more competitive and you can be there or thereabouts on safety car re-starts,” explained Norris, whose most significant battle did not occur in wheel-to-wheel combat, but rather with lap times.

Due to Hamilton’s five-second time penalty – brought on by his crash with Alexander Albon – Norris was faced with the challenge of getting within five seconds of the Mercedes F1 driver, and it proved to be a challenge he could manage.

Driving a stunning final lap, Norris ended the race on the inside of the five-second gap, thereby granting himself a podium – the first in his career.  “I almost got back down to sixth after Charles passed me and it was kind of going downhill and I was all over the place, locking up, going wide in the fight against Carlos,” he said.

“But I knew I had good pace in the car so I had to get my head down and try to get past Perez when he got a five second penalty and I was fairly aggressive with my overtake but I had to be at that point and then Lewis had a five-second and I only managed to get him on the final lap of the race. I think it was 5.8 onto the final lap and I managed to get it down to 4.8, so I wasn’t in the position I was in and if I didn’t put in the fastest lap of the race, which I’m very proud of, I wouldn’t be here.

He noted that he was aware of the penalty to Perez but not of Hamilton until about three laps to go. “I think the last few laps, it was kind of difficult because initially I only knew about Sergio having the penalty and I was P4 at that point I think, or P5 and obviously I still wanted P4 and I had pace and he was on the outside so I initially had to judge what risk I would take to try and get past him or whether I would hold position and I would just get the position freely through his penalty but I had much better pace and Carlos was right behind me so Carlos would have gone for every move he could have done, just like he did.

“So I knew I had to get past him but at that point I still didn’t know about Lewis having the penalty either so I was happy to get past him in the first place and I had clean air which was good for me and I could start putting down some decent laps and start catching Charles a little bit but he was still too far ahead to really catch.

“The first fight with Sergio was fine, I misjudged it a little bit because he slowed down a lot, but i just misjudged how much he was going to slow down, I got too close to him and Charles managed to get me which wasn’t a big surprise. The second overtake I came from a long way back, but he just kept turning in.

“We made a little bit of contact but nothing wrong, not too bad at all and that overtake got me on the podium, so if I didn’t do it then, I wouldn’t be standing here as happy and finishing on the podium. It was an important overtake, a bit of a risky one but a risk I had to take. And then I think it was with three laps to go that I got told that Lewis had the five second penalty and we used the rest of our engine modes and obviously I pushed it a bit more in terms of track limits and using the kerbs, because like Valtteri said, it’s quite harsh on the car.

“And when you can, you don’t need to take the risks and you may be backing off a little bit but we didn’t really have any concerns so while I was told I could get on with it and really push it and I took the risks that I needed to but yeah, on the final lap I managed to close in with the fastest lap even, I don’t know what it was, over a second and a bit on Lewis so that was a key.

“If I was any further back or I didn’t put in as good as a lap, I wouldn’t be here so thankfully we have the car which was quick enough, that I was able to close that… because you know, if it was this time last year I wouldn’t have had the car capable of doing so so it shows our improvement as a team and improvement to the upgrades and development over the winter,” summed up Norris.

This was McLaren’s second podium in three F1 races with Carlos Sainz scoring one in 2019 Brazilian GP. Norris became the third youngest driver to register a podium at 20 years and 235 days with Max Verstappen and Lance Stroll leading the chart.