Home F1 Austrian GP: Bottas wins in chaos as Norris was P3 with only... 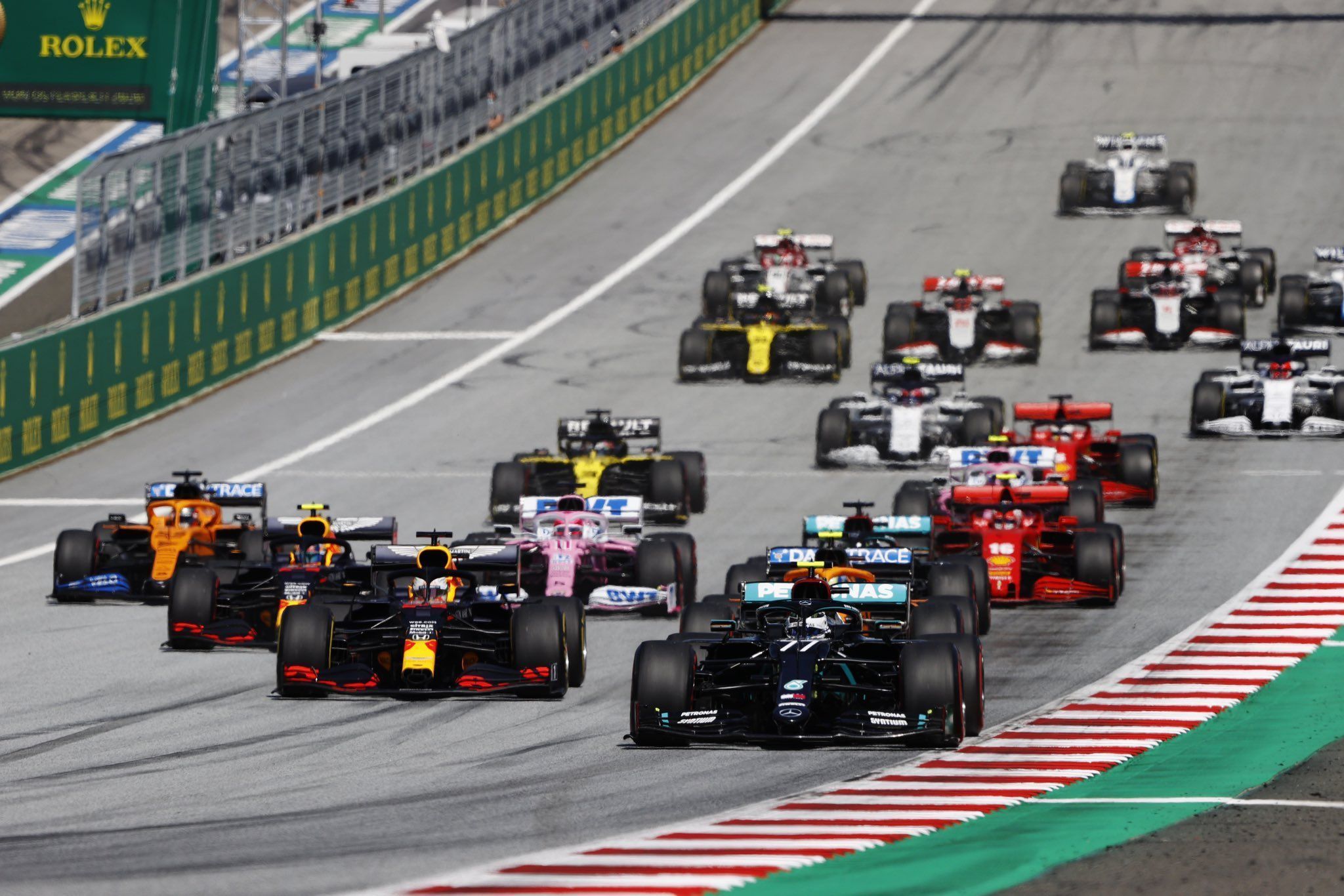 Mercedes’ Valtteri Bottas opened the 2020 F1 season with a win in Austrian GP amid chaos where Ferrari’s Charles Leclerc was second and McLaren’s Lando Norris third.

Even before the start of the F1 Austrian GP at Red Bull Ring, there was drama with Red Bull pressing the FIA to penalise Mercedes’ Lewis Hamilton for ignoring the yellow flags in qualifying when his teammate Bottas had an off en-route to pole.

Hamilton dropped to fifth as a result with Red Bull’s Max Verstappen starting second ahead of McLaren’s Lando Norris and Red Bull’s Albon. It was a clean getaway eventually from the Brit despite having been squeezed slightly by the Thai in the fight for fourth.

At the front, Bottas led the way calmly from Verstappen and Norris but the latter came under pressure from both Albon and Hamilton in successive laps. He dropped to fifth after being passed by both where the Thai driver lost out to the Mercedes man.

In the latter half of the Top 10, Racing Point’s Sergio Perez held on to sixth with Ferrari’s Charles Leclerc seventh, Racing Point’s Lance Stroll eighth, Ferrari’s Sebastian Vettel ninth and Renault’s Daniel Ricciardo 10th – the German passing the Australian at the start.

Things looked under control in F1 Austrian GP with over 10 laps done until Verstappen started to slow down. The Dutchman tried to get going but was forced to pit and retire with a suspected electronics issue as Hamilton and Albon moved to second and third.

Moments later Ricciardo started to slow down as well as he pitted then to retire, while just ahead of him Vettel passed a struggling Stroll. Racing Point tried to manage a sensor issue he was facing but it became too much eventually as he joined the retirement list.

With Bottas leading Hamilton and Albon, Norris was fending off Perez for fourth with Leclerc and Sainz mostly on their own. The retirement for Ricciardo and Stroll allowed AlphaTauri’s Pierre Gasly and Daniil Kvyat to sneak into the Top 10 behind Vettel.

Renault’s Esteban Ocon, meanwhile, was battling Haas’ Kevin Magnussen just outside the Top 10 when a suspected brake failure for the Dane forced him to retire. It brought out the safety car as the F1 field pitted with Mercedes and McLaren double-stacking.

It didn’t change much of the order as Bottas continued to lead Hamilton and Albon, whereas Norris kept Perez at bay. It got fiesty behind with Leclerc fending off Sainz when Vettel tried to get a look in at Turn 3 but locked-up to spin around.

The German dropped to the back of the field as stewards put Perez under investigation for unsafe release. At the same time, Haas’ Romain Grosjean was shown a black and hite flag for track limits after the Frenchman spun himself around.

Things started to settle down in F1 Austrian GP but drama awaited with both Mercedes drivers being warned to stay off the kerbs as they were facing sensor issues – so much so that James Vowles had to intervene to remind them of the problems.

Even with that Bottas and Hamilton were over 10 seconds ahead of Albon. The retirement list, meanwhile, continued to get longer for F1 Austrian GP with Grosjean and Williams’ George Russell joining in, where Frenchman seemingly also had brake issue.

Russell stopped on track which forced a safety car deployment as it allowed selected drivers to pit for a fresh set of compound. Both the Mercedes drivers along with Perez stayed out, while Albon pitted for a soft compound to drop to fourth.

Norris, Leclerc and Sainz changed to mediums in fifth, sixth and ninth as Gasly, Ocon and Alfa Romeo’s Antonio Giovinazzi stayed out on the hards in seventh, eighth and 10th. Even before things got going on re-start, there was another safety car period.

Alfa Romeo’s Kimi Raikkonen lost his front right which came lose in the final corner and flew around, thankfully damaging none other. His teammate Giovinazzi also dropped out having gone wide on the brief re-start to F1 Austrian GP.

In that moment, Albon had passed Perez for third but the Mexican got ahead as the safety car was deployed. They swapped under the period, though, with the Thai ahead of the Mexican – in a perfect position to tackle the Mercedes duo.

And it happened, Albon went for the move on re-start as they went wheel-to-wheel for couple of corners until they made contact with the Thai racer spinning on the gravel, much like how it happened for them in the 2019 Brazil GP.

Albon dropped to last with Hamilton keeping second but the move was put under investigation soon. Perez, meanwhile, gained a place to be third as Leclerc made the move on Norris to fourth and Sainz on Gasly to be sixth.

Hamilton was handed a five second penalty for the incident with Albon as Leclerc caught up Perez and passed him for third as Norris and Sainz got into a tussle of their own. The Mexican driver got a five seconds penalty for speeding in the pitlane.

Amid all this, Albon retired due to problems as Kvyat suffered a left-rear puncture to join the retirement list. Up front, Norris and Perez came to blows with the British driver sneaking past him for fourth, with the Mexican losing out to Sainz as well.

While all this was happening, Bottas held on to his lead to open the 2020 F1 season with a victory in Austrian GP. Hamilton was second on the road but dropped to fourth eventually with the penalty. as Leclerc finished second and Norris registering his first podium in third.

Norris also set the fastest lap with Sainz finishing fifth ahead of Perez, who kept sixth despite his penalty. Gasly was seventh as Ocon returned to F1 with a eighth place finish from Giovinazzi, Vettel and Latifi – only 11 finishers in all.