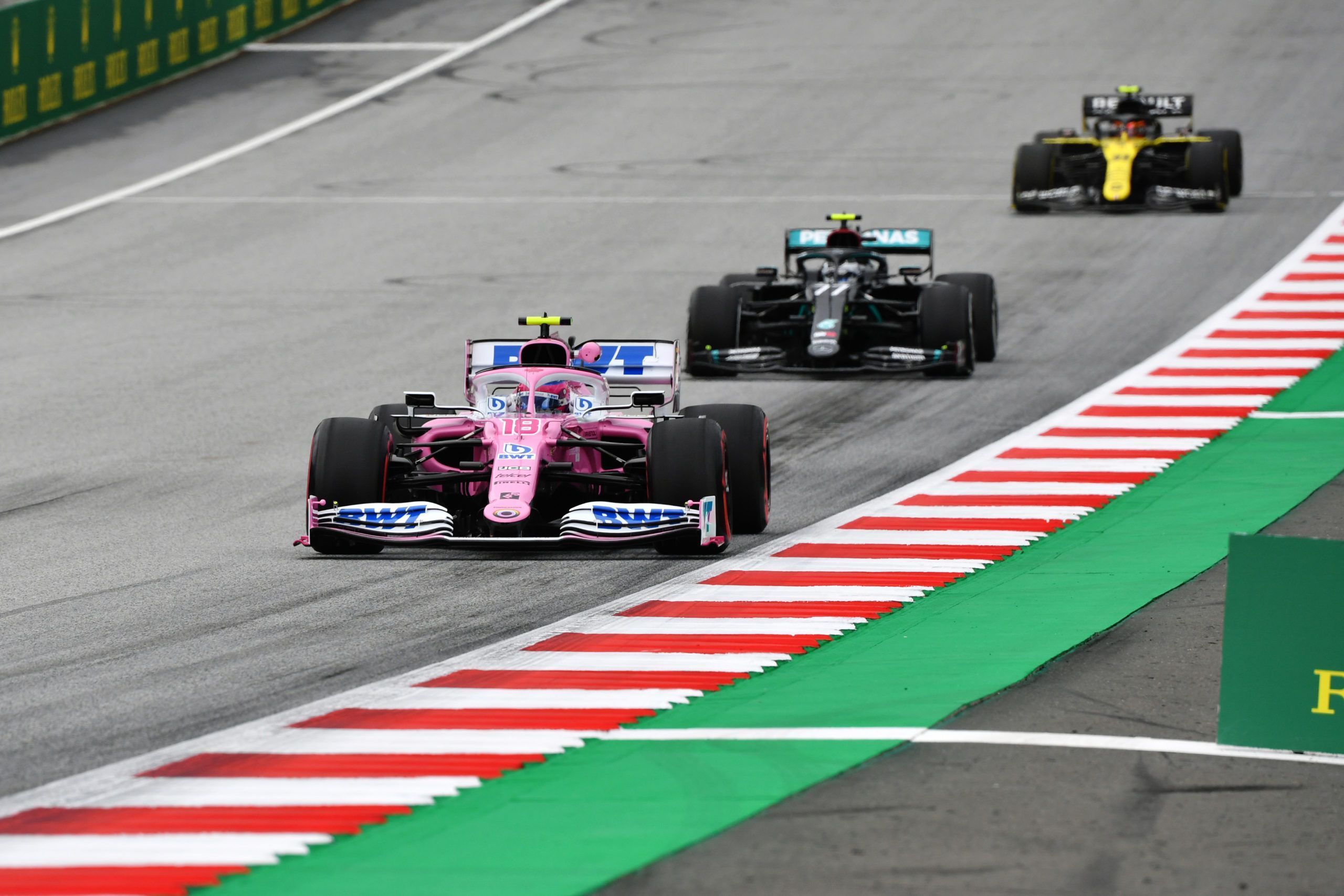 The first Friday of the 2020 F1 season had plenty to talk on and off the track with Mercedes’ form along with Ferrari and Racing Point’s pace headlining Day 1 of Austrian GP.

The first day of the F1 2020 season did not fail to deliver. With performance upsets, spins, and even technical protests, there were multiple story lines at play, one of which was the pace of the Mercedes duo as they led the way.

Donning masks and black F1 race suits, Lewis Hamilton and Valtteri Bottas topped the time sheets in exactly that order on Friday, just as they did on the last day of free practice in November – the last time the teams and drivers had any competitive outing.

Reflecting on the day, the faster one of the F1 pairing – Hamilton – was positive, even if he felt the track was unusually green, and that the Friday results are not representative of the true pace of all teams on the grid.

“I think we have been able to continue to improve the car compared to last year, so that’s a big positive,” said Hamilton. “The track was a little bit greasy and while the grip will pick up, it feels like the track only improved a very small amount.

“It was looking good out there today, but you can never take too much from practice. You never know what power and fuel other teams are running. So we will take today’s result with a pinch of salt, try and improve the car tonight and come back for the fight tomorrow.”

Bottas had gearbox issues which he thinks the team will find the solution to. The Finn feels the balance between high-speed and low-speed corners will be the main task for them. In practice, Mercedes’ form was unrivaled, except by Red Bull Racing.

Although they couldn’t show their best hand as well due to multiple spins by both Max Verstappen and Alexander Albon. The Dutchman finished third in FP1, and eighth in FP2, albeit with broken bodywork for the duration of his flying lap attempt.

“The lap times don’t really say anything because I broke my front wing on the push lap, so we had to fit a different wing,” said Verstappen. “I think we were a little too aggressive for that and I had a spin and a little off, but nothing major.

“The kerbs are what they are here and it’s the same for everyone, the front wing doesn’t really like the yellow kerbs so we do have to be careful. We are I think confident and there are always things we can do better but overall it was a good day.”

Teammate Albon was satisfied with his day and expressed surprise that so many of those on the grid got back into without trouble. “It felt pretty good and it was nice to be back in the car. I’m happy and excited that we’re back underway and I think everyone was on it straight away which I was quite surprised about.

“There are a couple of things we need to work on, and there’s always a bit of time in your driving and set-up, so we’ll see where we are tomorrow but we know what to do. You’ve got to build up to the limit here as the kerbs are dangerous and some of them can be front wing killers if you hit them too hard.”

At the tip of the Top 3 were Ferrari, who came into Austria with lowered expectations given the nature of their upgrade schedule, but the performance of the team left Charles Leclerc with something to be desired, as he hopes they’ll be able to improve over the weekend.

“It’s good to be back in the car after a long pause but on the other hand it wasn’t an easy day for us so it was difficult to enjoy it fully,” started Leclerc. “All the cars are very close, which is exciting to see on the one hand, but on the other hand, we would like to be fighting a bit nearer the front.

“The balance of the car is not that bad, we need to catch up in terms of overall performance. The lack of pace is not  down to any one thing in particular so we’ll try different ways for tomorrow and see if we can gain some performance.

“Qualifying will be good for the show, as there are quite a lot of teams all close together. We’ll be fighting very hard and it’s crucial we make the right choice tonight to come back with a stronger car tomorrow.”

Birthday boy Sebastian Vettel was slightly less down on the the opening day of his final season with Ferrari, even though he stated that the SF1000 lacks grip and downforce, and acknowledged that they likely won’t fight for pole position, but will instead be involved in the ‘best of the rest’ fight.

“I think we had a decent day,” said Vettel, having improved from 12th to fourth from FP1 to FP2. “We didn’t have any trouble with the cars. It was good for us all to be back at the track and it was good to see that the team got up to speed fairly quickly and had no problems running through all the procedures.

“In terms of speed and competitiveness, it was an interesting day. I think we’ve seen that we are not at the top, that we are not the favourites. And then there is a lot of stuff going on behind that, and it’s very tight. I don’t think we will be fighting for pole, but we must try to be the best of those behind that battle.

“We didn’t take much notice of the teams around us to be honest, as it’s always difficult to predict what sort of fuel loads people are running. I think we will see tomorrow, because we haven’t got a clear picture today. It’s up to us to develop and work so that the car gets faster. We’re lacking grip and downforce compared to others.

“So it’s a mix of all these things.” One surprise of the day was Ferrari F1 pace relative to that of Racing Point, who seem to have bridged the gap between the midfield and the front with their RP20 – which has been heavily talked upon as ‘pink Mercedes’.

Within this team, Sergio Perez was the frontrunner, finishing fifth in the first practice session, and third in the second. The Mexican was happy with his performance, but stated that he will have to stay vigilant in order to get the best result possible given the tight spread of the F1 field.

“It’s been an interesting day,” said Perez. “Everything is really close out there, especially on such a short track. The car feels good and I’m happy. In the factory, the team has done a tremendous job and we have a car underneath us that is working well.

“There’s still a lot of work to do – tonight and tomorrow morning – but we are in decent shape. The margins are extremely close, so it’s going to be really important to put together some really tidy laps in qualifying tomorrow.”

Teammate Lance Stroll of Racing Point had a solid run too. His qualifying has been average but with a stronger pace, it will be good for him to show his mettle. Perhaps the closest competitor of Racing Point was McLaren, of whom Lando Norris was the fastest with a sixth place finish in both FP1 and FP2.

His teammate Carlos Sainz had similar pace at times, but a slightly less successful day, coming home fourth in FP1 and 10th in FP2. “It’s a positive first Friday for the team, it felt great to be back in the MCL35,” said the Spaniard. “We had some challenges and need to keep an eye on those yellow kerbs.

“I ran over one on my flying lap which cost me time on the final sector. Another minor issue kept me in the garage towards the end of the session but until then the car was showing a decent pace. We are starting to see the pecking order a little better and we are up for a tight Saturday.”

Behind, Renault was also among those at the front of the mid-field, but in the eyes of their driver Daniel Ricciardo, they still have work to do on their long-run pace. “Firstly, it’s really nice to get back into it,” he said having finished inside the Top 10. “After Australia, I think we were all a bit nervous if we were going to be here, so it’s great to be out there again.

“The car felt good straight away and we carried some good momentum through the day. Our long run pace gives us something to work on, while the low fuel pace looked decent, so I’m pretty happy with that.

“Taking the timing board out of it, the car feels like it’s progressed, so it’s positive feelings and I’m looking forward to qualifying.” His new teammate Esteban Ocon had bits flown off from his car in FP1 but managed to see-through whole of FP2 without much issue.

While the above teams looks in a better shape to be in the Top 10, the rest of the positions is likely to see teams like Haas, AlphaTauri, Alfa Romeo Racing and Williams. Among these F1 teams, Haas is seems like to be in a better shape but they had their set of troubles.

Romain Grosjean missed the chunk of FP1 due to brake fluid leak as he admitted to having taken more time to adjust back into F1 mode. Teammate Kevin Magnussen felt better but is still learning the car, something which both AlphaTauri drivers noted.

Daniil Kvyat had spins but overall he was still happier with the car’s performance, while Pierre Gasly felt more work needed to be done which was similar to Alfa Romeo’s Kimi Raikkonen, who seemed to be struggling with multiple lock-ups.

Teammate Antonio Giovinazzi felt better which the results showed but it is early days still. Meanwhile, Williams looked to be in a better shape with George Russell setting some good times as Nicholas Latifi took it cautious, because of it being his first day in F1.