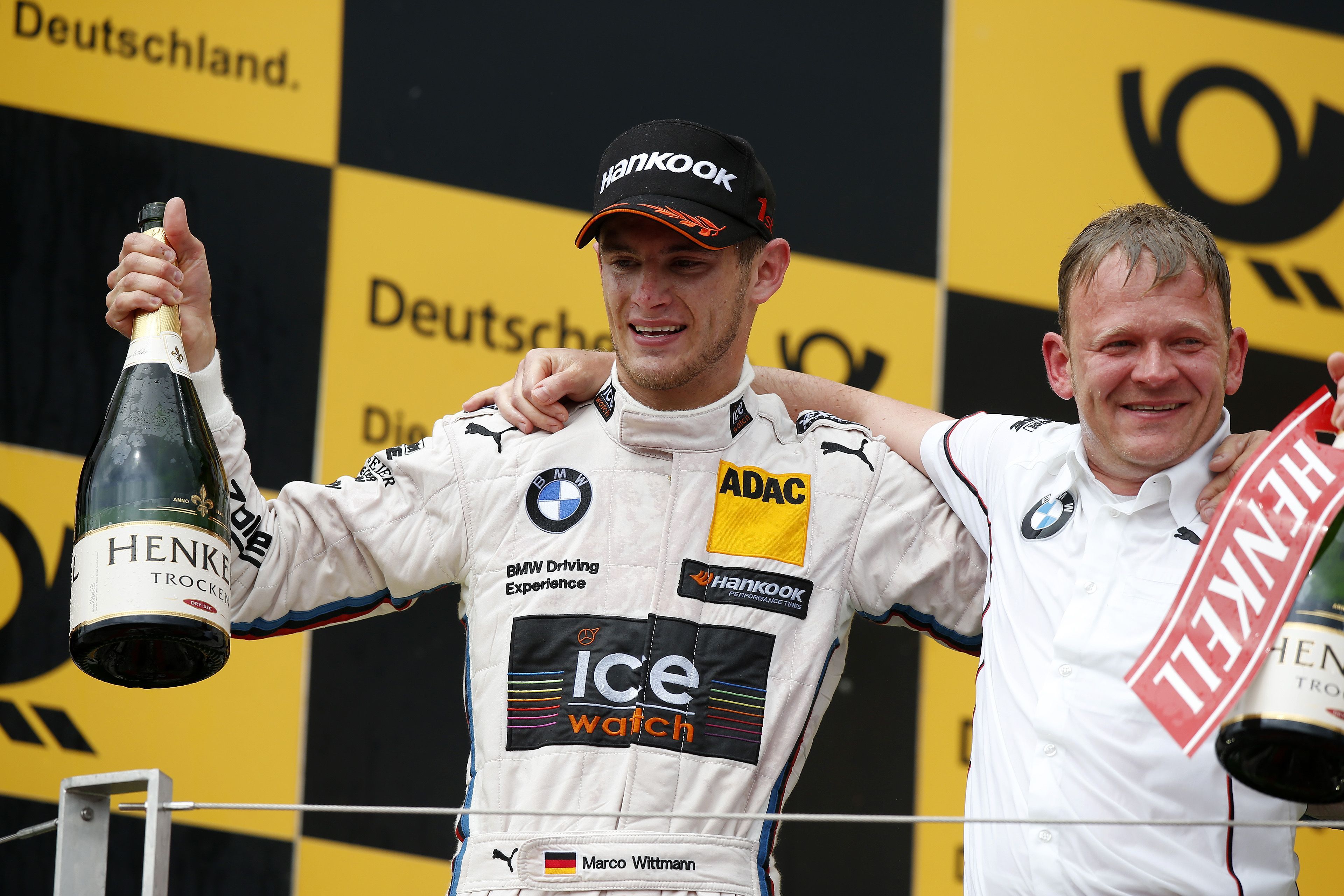 Marco Wittmann won the DTM championship today after a difficult race that saw Mercedes driver, Pascal Wehrlein , become the youngest driver to ever win a DTM race. Mattias Esktröm retired because of a wheel that was not attached properly, which helped Wittmann gain the championship. Vietoris and Scheider complete the podium while Spanish drivers, Juncadella and Molina finished respectively, fourth and ninth.

Yesterday weather in Lausitztring was not as good as could be expected, but today’s conditions were not better: the sun did not come out and the sky was mostly cloudy, it even rained in the morning which prompted all drivers to go out on wet tyres (except for Mortara who chose slicks).

To win the championship, the leader, Marco Wittmann, needed to finish at least 4th, or better according to what Mattias Ekström did.

As the fires went out, the start was more favorable to the drivers in odd positions who add more grip. Ekström was among the drivers penalized and he lost a few positions while Juncadella went to the second one. The start was mostly quiet apart from an incident between Spengler and Tomczyk at the second turn (for which the Canadian driver received a drive-through). Ekström also went a little wide and hit the grass in the first curve and lost even more positions. Everyone thought hard in the pack and drivers like Vietoris and Di Resta won ten positions but Wehrlein had already escaped.

There were more incidents in the subsequent laps : Green spun and lost a few places, the English driver unknowingly went out at the same place, Ekström, did a few laps before. In the meantime, Tambay and Da Costa touched and the Portuguese driver had to retire. A few minutes later, the stewards had to investigate a contact between Audi driver Nico Mullery, who retired, and BMW driver Timo Glock, who lost a few places.

During the 19th, the stewards sanctioned Juncadella and Wickens who did not observe the yellow flags waved after Da Costa’s incident, the sanction prevented the Spanish driver from reaching his first podium. Behind the fight went on and Wittmann did his best not to put himself in danger since his rival was just behind. Green then touched Tomczyk (the English went wide and touched the German driver) which gave the stewards even more work and ended with a drive through for the Audi driver.

The first driver to shift to dry tyres was Spengler in the lap 22, which was little bit premature since the wet tyres were still making faster times. Mortarra followed suit in the lap 26 and then Mattias Esktröm. The change proved bad for the latter since his wheel was not fixed properly which forced him to retire. Wittmann was sure really happy about the situation and he shifted to dry tyres after that. Those started to work quickly after as the track was drier and drier.

With 20 laps to go, everything seemed stabilized and Mercedes cars seemed like fish in the sea, with five of them in the six first positions, Scheider kept his third position while Juncadella caught up with him and was finally able to use DRS.

Paffett got caught in a sandwich between Tambay and Green, which was once again investigated while Di Resta damaged his Mercedes to the point he had to retire in lap 38.

With only ten laps to go, Tambay touched Green and had to retire as well while behind Hand tried to take the interior to Rockenfeller but ended up touching the American driver. In the end,Green had to retire four laps before the finish putting an end to a disastrous race. One lap after, Martin went wide as well and left the asphalt just as Spengler executed his first stop to change tyres again.

Wherlein ultimately won and was crowned the youngest driver ever to win a DTM race. Vietoris and Scheider added a little spice to the final laps as they fought bitterly for the second place. Yet, everyone had eyes on Wittmann only, who, after Ekstöm’s retirement, was virtually champion, and the youngest one to say the least. Both Spanish drivers, Juncadella and Molina, finished in the points at 4 and 9.

The race we got to witness in Lausitzring was a complicated one that saw two lights shine brighter than the others, Wherlein who took the victory and Wittmann who was crowned champion. On the other hand, Ekström’s and Green’s journey were disastrous to say the last, they were respectively second and third on the grid and both failed to finish the race.