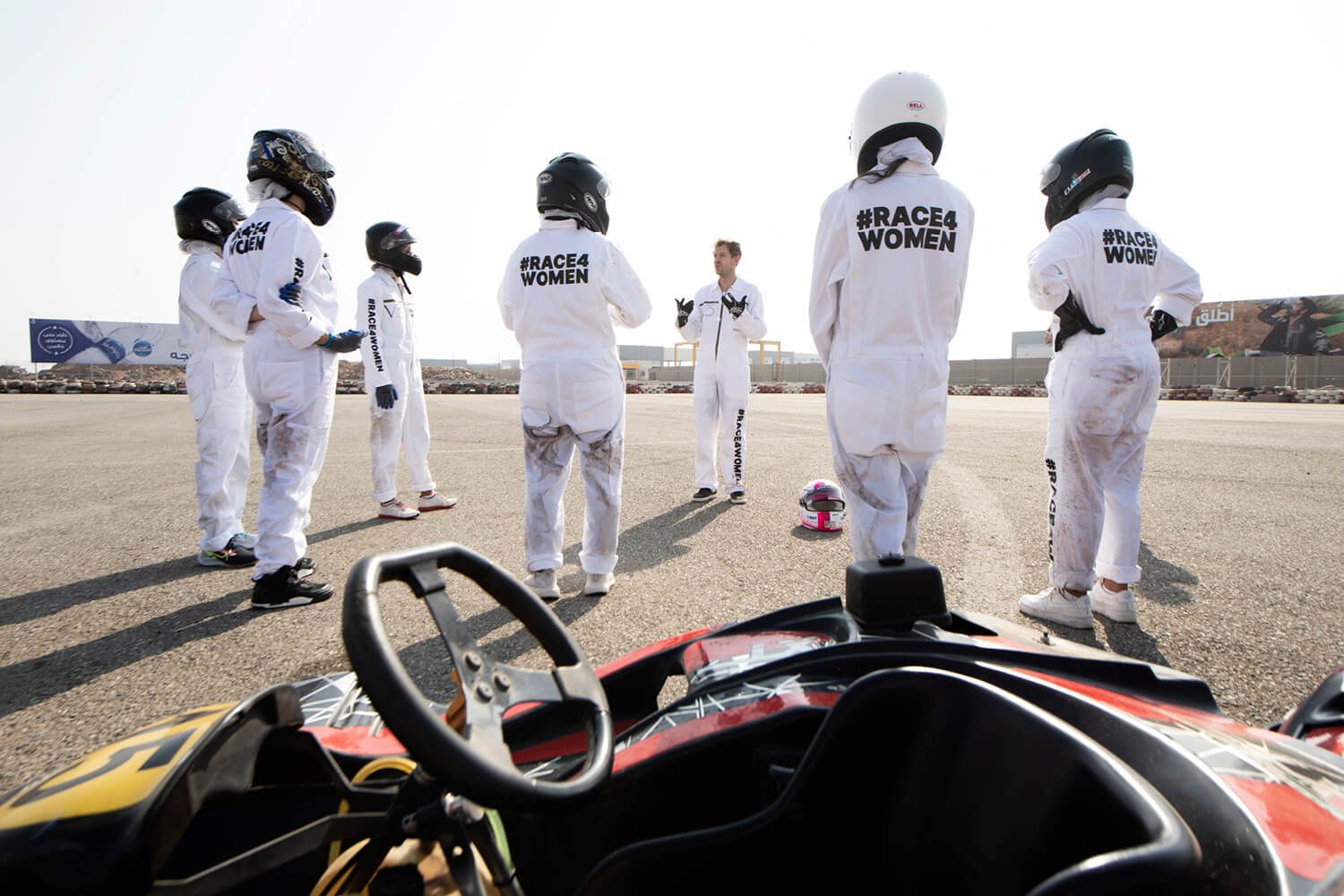 Sebastian Vettel held a kart race in Saudi Arabia ahead of the F1 grand prix weekend with female racers as he opens up on his thoughts.

Over the years, Aston Martin’s Vettel has taken up the mantle of talking more about the social and environmental problems of the world. He hasn’t shied down to share his thoughts. In Hungary, it made headlines with his LGBTQ+ stand.

Lewis Hamilton caused a uproar in Qatar with his rainbow helmet which he will in Saudi Arabia too. Vettel, meanwhile, had worn his rainbow coloured shoes on Thursday in the paddock, while Mick Schumacher shared a rainbow t-shirt on his social channels too.

Outside the media view, Vettel hosted a kart session for female racers in Saudi Arabia under the hashtag #Race4Women with the idea of encouraging more female participation. He also highlighted that how women only got to drive cars in the Kingdom from 2017.

“It was really exciting, obviously there has been a lot of talk and thought heading into the race here the first time we race in Saudi Arabia and a lot of question that have been asked,” said Vettel in the press conference. “I’ve asked myself and I was thinking about what I can do? Other than in general we have too much attention and focus on negative examples when it comes to shortcomings of certain countries in regards to maybe human rights and other things.

“I really try to think of the positives, so I set up my own karting event today under the hashtag ‘Race 4 Women’. We had a group of seven or eight girls and women on the track. I set up a nice event only for them. I was trying to pass on some of my experiences in life. Obviously on track to do something together and to grow their confidence. In Saudi Arabia women have only been allowed since 2017 to drive a car so some of them had a licence other did not. Some of them were hugely F1 enthusiasts.

“Others had nothing to do with Formula 1 racing before today. It was a good mix of women from different backgrounds and a great event. I think everyone was extremely happy . I was very inspired by their stories, their background and their positivity about the change in their country. It’s true that if we look from a western or European lens there are lots of things that should be improved and have to be addressed.

“It’s also true that some things are changing and for those people it makes a huge difference. In the end, its very difficult for us to come to a country where we spend maybe only a couple of days. Trying to be a perfect judge but not knowing the background exactly nor the people inside out. For me, it was important to get to know some of these women. I think it was a very memorable and inspiring day and a great way to kick off the weekend . That is the main thing focusing on the positive,” summed up Vettel.

Last week in Qatar, Vettel didn’t wish to speak much about Saudi Arabia and it sort of meant that he was asked not to speak about the issues, but the German discredited those notions, adding that him doing the event and answering about it throws that down.

As Vettel mentioned above, he doesn’t wish to dwell too much into negativity of what has happened, but wishes to lay his hands on how it can be improved for the future. In fact, he doesn’t limit to just Saudi Arabia, but agrees that there are problems everywhere.

“It’s clear that some things aren’t going the way they should [in Saudi Arabia],” said Vettel. “It’s also probably true that things are always taking time and it’s a progress. I would love to change the world in some things over night but who am I to judge about right and wrong …I think that’s a slippery slope. In some countries, some shortcomings are bigger than others. There’s trouble in Germany, there’s trouble in the UK when it comes to individual freedom and probably to a different scale and level.

“We don’t really get anywhere when we just highlight the negatives. Being so negative… in the end, it makes you sad. I find much more inspiring to highlight the positives and listen to those whose lives have been touched and whose lives have been improved. To see the confidence that these women ha in an area that is male dominated when it comes to driving or racing to give them the chance and the focus I think has been great and it’s given me a lot of pleasure even if it wasn’t a race like something people imagine, but just the fact that I am spending time and giving something back and some of my experience.

“They really enjoyed. For me that’s a happier way to look at something to focus on the positives rather than just the negatives. As you mentioned there are shortcomings that need to be addressed. The  more powerful tool is the positive weapon rather than the negative one,” summed up Vettel. The German wasn’t the only who spoke about the issues as Hamilton had his say too.

“As I said at the last race, I feel that the sport and we are duty bound to make sure that we try to help raise awareness for certain issues that we see, particularly human rights, in these countries that we’re going to,” said Hamilton. With the utmost respect for everyone that’s here, I’ve so far had a warm welcome from the people on the ground. I can’t pretend to be the most knowledgeable or have the the deepest understanding of someone that, particularly, has grown up in the community here that is heavily affected by certain rules and the regime.

“Do I feel comfortable here? I would not say I do. But it’s not my choice to be here. The sport has taken a choice to be here. Whether it’s right or wrong, I think whilst we are here, again, I feel like it’s important that we do try to raise awareness. So in the last race, for example, you saw the helmet that I wore. I will wear that again here and in the next race because that is an issue and is a law.

“If anyone wants to take the time to go and read what the law is for the LGBTQ+ community, it’s pretty terrifying. There’s changes that need to be made. Also, women’s rights of being able to drive since 2018. Some of the women are still in prison from driving many, many years ago. So there’s a lot of change that needs to happen, and I think our sport needs to do more,” summed up Hamilton.