Max Verstappen has won an important race to arrive to Formula 1. He wins the Zandvoort Masters after dominate throughout the weekend. Jules Szymkowiak and Steijn Schothorst accompany the Dutch driver in the podium.

Yesterday classification was divided into two 20 minutes sessions, one at morning and the other one at afternoon. In the morning session the rain made ​​an appearance and this caused that the domain of Max Verstappen was stopped by Szymkowiak taking out the provisional pole ahead of the Dutch. In the afternoon the track was dry and Verstappen took the pole position with six tenths ahead of Sam McLeod and Nabil Jeffri.

Today’s race Verstappen has retained the top spot from start to finish, Jules Szymkowiak and Steijn Schothorst have demonstrate the level and value coming back from the fifth and fourth place of the grid, respectively.

Nabil Jeffri and Indy Dontje have finished in fourth and fifth place with team Motopark. Martin Cao was sixth with Denis Van der Laar and Nikita Zlobin finishing close to him. 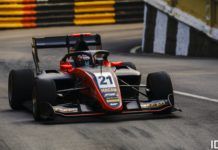