Red Bull Racing’s Max Verstappen feels enlightened after completing first of the two days from his community service with the stewards during FIA Formula E Championship race in Marrakesh.

Following his verbal and physical spat with fellow Formula 1 rival Esteban Ocon in the 2018 Brazilian GP, Verstappen was handed a two-day community service by the FIA. The Dutchman finally undertook his punishment in this weekend’s Formula E race.

Verstappen spent one of the scheduled two days following the Marrakesh ePrix from the stewards room where he had a in-hand view of how decisions are taken by the FIA stewards for any incident on track at any particular time.

In his F1 career so far, Verstappen has had major disagreement with the stewards over several decisions which went against him in the races. It looks like the FIA wanted him to learn and understand how the stewards work and deliberate on certain incidents.

Often the work of the FIA is criticised hugely with certain clashes even if in similar nature, the decision sometimes are different with the variable factors involved. The Dutchman, in fact, felt good about the service and got the behind the scenes view.

“It’s interesting to see it from the other side – normally you can’t spend an entire day with the stewards,” he said. “Everybody does their own job during the weekend, and it’s good to really see what it takes to make these important decisions.

“Sometimes a decision might not be nice for a certain person but it has to be taken and you have to follow the rules. I think it’s good to experience different things in racing rather than just sitting in the car.

“To be here and do this kind of work has been a constructive thing for me. I’ve of course followed Formula E a bit on TV but I’ve never been in the paddock, and I really enjoyed the day. First of all it was a really exciting race.

“The championship is clearly growing and there are a lot of manufacturers here, so I think it’s a cool series.” It remains to be seen what has the FIA in store for Verstappen for his second of the two-day community service.

While Verstappen felt good to see things from the other side of the fence, Virgin Racing’s Sam Bird wasn’t liking the fact that the FIA chose the punishment they did for the Dutchman’s community service.

The British driver implied that visiting a Formula E race as community service sends a wrong message. However, it seems like the FIA wanted Verstappen to spend time with the stewards to see how it works considering his previous verbal barrage over decisions. 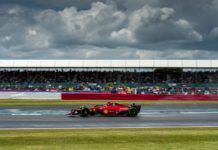