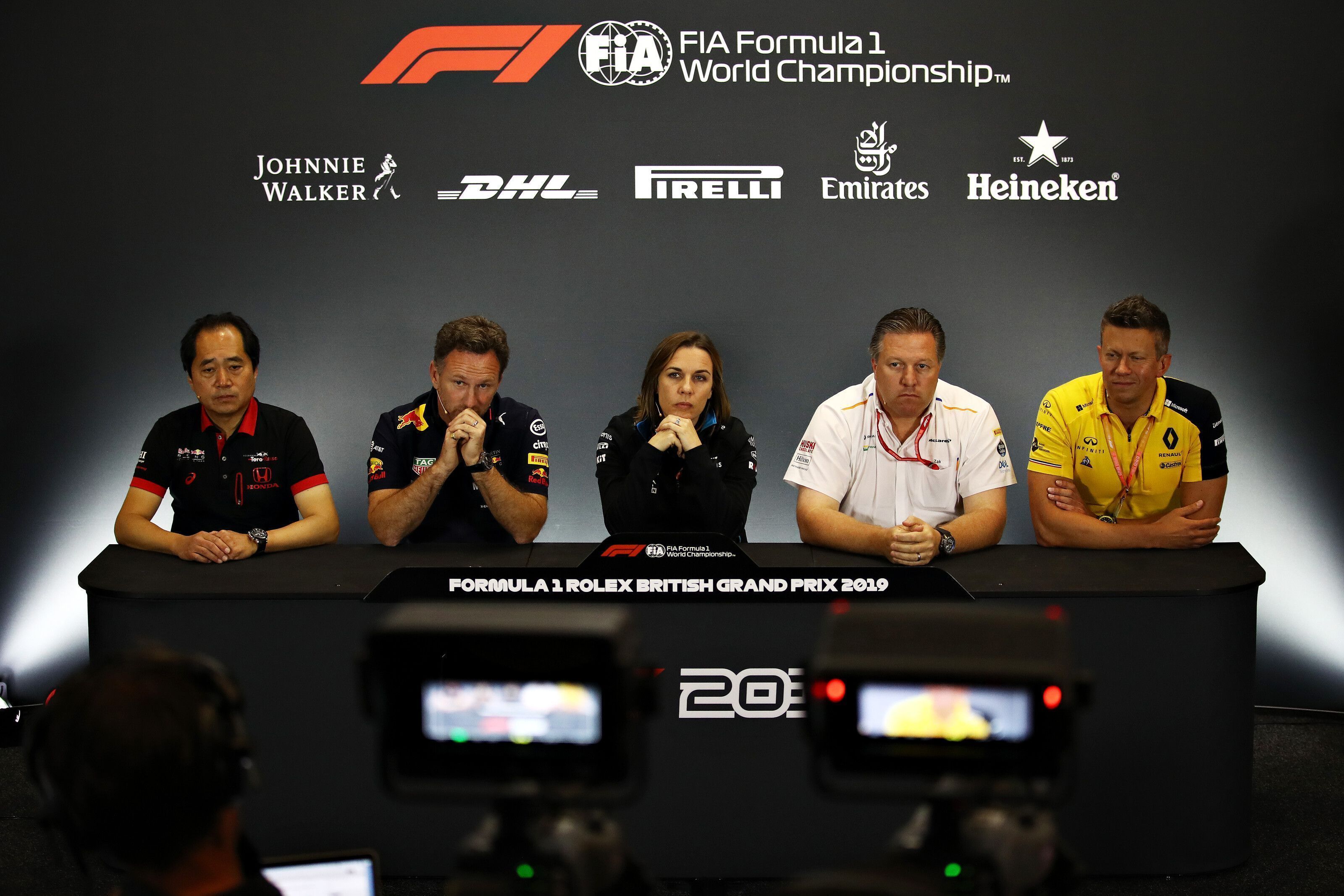 Selected teams along with Honda don’t blame Mercedes for their top work and dominance in the hybrid era of F1.

In the F1 Beyond The Grid podcast, Ross Brawn revealed one of the secrets for Mercedes to be so ahead in the game. He talked about the manufacturer asking questions and seeking clarifications on certain items with nearly six months gap to their rivals.

It meant, Mercedes already had a commanding start over their then competitors Ferrari and Renault, while despite a one year late start for Honda to prepare themselves as much, it didn’t work with the Japanese manufacturer faltering the most.

While we can say Ferrari had their chances but even then the German manufacturer found their way and look set to win both the F1 titles for the sixth time in a row. It has certainly turned off certain section of fans but teams aren’t blaming Mercedes for their dominance.

The team from whom, they took the mantle ahead, Red Bull Racing’s Christian Horner said: “Everybody has the same set of rules presented to them at the beginning of each year and you’ve got to take your hat off to Mercedes and Lewis for doing such a great and dominant job.

“I think, for me, the lessons that you learn, particularly over time, is that the more you change things, the more spread you create in the field and the regulations change that we had over the winter didn’t help anything.

“In fact it made a dominant team even more dominant so I think the aerodynamic changes, the tyre changes that were made actually didn’t do anything to help the sport or the spectacle and I think that’s where we need to be very very careful for 2021.

“This is because each team will believe they can get an advantage and ultimately somebody will get it right, somebody will get it wrong but there could be a much bigger spread than there is currently and for me I think the most important thing is once a set of regulations is achieved and found for the future, is consistency.

“The most important thing is leave it alone for a long period of time and then you will get the grid coming together with stability. The worst thing is dicking and changing something every year which isn’t fully understood that then changes the dynamics of the car.

“So for me I think you will get absolute convergence with stability and I think that whatever is done for 2021 should be fixed pretty much for a five year period unless there’s some fundamental flaw in it.”

At the same time, his engine partner, Honda’s Toyoharu Tanabe, added: “Mercedes and Lewis are doing a very good job. They are talking about the 2021 regulations and then the PU manufacturers working on 2021 regulations to have a more competitiveness for each person. Not fixed yet but we will see the result soon, I think.”

While Red Bull focused on having consistency with the rules instead of constant changes, Renault’s Marcin Budkowski pinned his hope on the 2021 rules, especially with regards to the budget cap, which has been an issue for them, even with manufacturer support.

“I don’t think you can say something like Mercedes are killing the sport, they are doing a really good job and they are deserving their wins and their championships and all of us are sat here and thinking we should look up to them and do the same job and then we will compete with them.

“I think there are changes coming for 2021 under Liberty’s and the FIA’s guidance to make the sport more competitive, certainly to make it fairer and more sustainable as well. Whether they will be successful… we think they are on the right path.

“I certainly think the budget cap is probably the biggest impact on the relative competitiveness of the sport so we’re very supportive, we’re very pro-active in helping them writing the regulations and planning what the sport will be from there.

McLaren’s Zak Brown more or less agreed with others as well: “You’ve got to give credit to Mercedes and Lewis for doing an outstanding job. I think we all recognise the sport is not where it needs to be, to have a more level playing and therefore better competition.

“I think 2021 will be a big step forward so I think we can expect a lot more Lewis and Mercedes victories this year, most likely again next year and then hopefully in 2021 with enough rule change that we will start to see the grid get a little bit more mixed up because certainly we need to be putting on a better show for the fans.”

Mercedes’ customer, Williams’ Claire Williams praised Red Bull’s work for beating Mercedes in Austria and added on the 2021 rules as well: “I don’t think you can take away from Mercedes the extraordinary job that they have done and it’s down to the remaining nine teams to do a better job to take the fight to them.

“Someone’s got to win, that’s the whole point of this sport, that you employ the best people, you get the best resources you can around you in order to create the most competitive car and they have done the best job of that. Someone has to win in this sport.

“We don’t obviously want the same team – it’s not great for the health of our sport – for the same team to win in each and every race. I think that’s why huge congratulations have to go to Red Bull because it’s tough to beat Mercedes at the moment and to see another team taking a victory at an event was fantastic, fantastic for the sport.

“But it’s about creating great racing, isn’t it and making sure that all the regulations collude in order to achieve that and I’m very much hoping obviously that the regulations that are coming on board in 2021, whether that be the technical regulation, the financial regulations all contribute to helping improve the competition that we have, that ensure the sustainability of our sport moving forward into the future.”