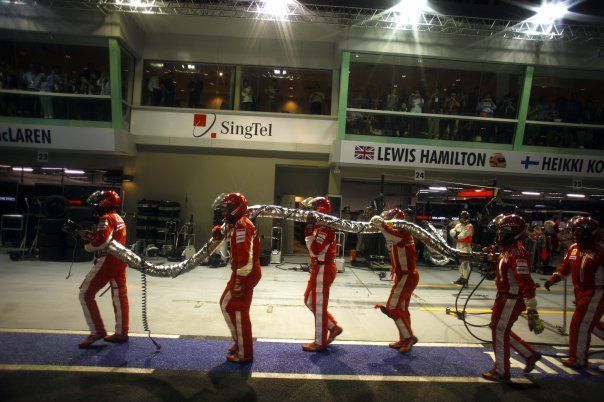 Ferrari’s Charles Leclerc says he will be happy to try re-fueling if it comes back as Mercedes’ Lewis Hamilton talks about the growing weight of the F1 cars.

FIA President Jean Todt mulled about getting re-fueling back in F1 over the British GP weekend, which drew in mixed response from people alike. While he said that, the update on the discussions being done regarding the 2021 changes did not mention re-fueling.

It seems unlikely thing to happen as if they were planning to bring it in, the FIA update on 2021 would have had a mention of it, especially because re-fueling requires a key design change. Whether it comes to fruition or not, it gave drivers to speak about it.

One of the fresher talents – who hasn’t had the chance to drive with re-fueling – Leclerc feels happy about it. In addition, the Monegasque along with Hamilton and even Valtteri Bottas talked about the proposed lessening of driver aids from the engineers too.

“I’ve never raced with re-fuelling but it was definitely one cool thing to see, so if it’s back in F1, why not? I will be happy to try,” said Leclerc. “I think the main problem is still that the cars are probably too heavy so these two things for me are separate things but ref-uelling can be a good idea.

“Then, to limit the amount of information to the box or to stop, I think we are quite limited in that the cars are so complex now that we also need to make them run, having the help of the engineers, in the background, but maybe reducing some information.

“But I think we are limited into that, just by the complexity of the cars now. That’s it.” At the same time, Hamilton said about the domino effect with the reduction of the weight of the car. “Don’t necessarily think lowering driver aids is going to make a big difference to racing,” he started.

“It’s really hard for Pirelli to develop a tyre with such limited testing that can sustain that weight etc etc and then the thermal deg, all these different things, it’s like a domino effect so with lighter car, we could fight harder. If you look at the tyres that we have at the end of the race, we can push more, we can race more at the end with so much of a drop-off.

“That’s because the car was lighter on the lighter fuel, so that might not be such a bad thing for us in the future but there’s a bunch of other elements that is not in that list. The cars don’t need to be 730 kilos, they just don’t need to be that heavy.

“They used to be 600 or something was it, years and years ago. I spoke to my engineers and they said if they change the rules we can make it that weight. We just have to take some things off the car but we can make it lighter