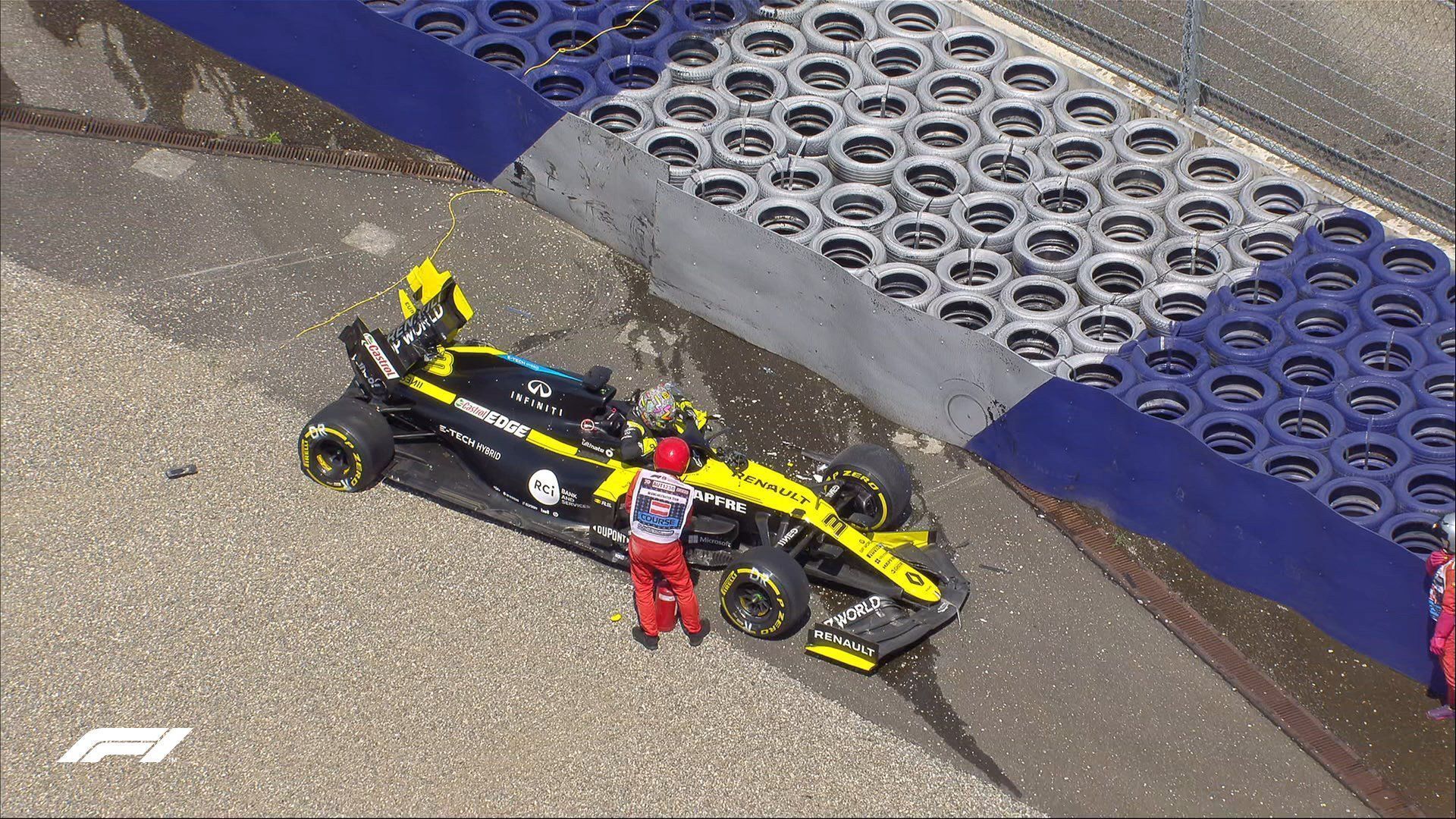 The second Friday of 2020 F1 season during Styrian GP at Red Bull Ring had much to talk about with various teams having some upgrades and laps deletion along with heavy spins.

In the first day of running in the historic F1 Styrian GP weekend at Red Bull Ring, one team seemingly on form was Red Bull Racing, who will be looking to come back strong after a double DNF last weekend at their home track in Austria.

FP1 saw Max Verstappen end up second while in FP2, he was first. This, in comparison to last weekend when Mercedes led every session – excluding the F1 race – with a 1-2. This boost in performance was highlighted by the Dutchman, and put down to a better understanding of the car and how to best set it up.

“Much better than last week,” said Verstappen. “We’ve made a good step. Of course it is still too early to say how we are fully looking against Mercedes but from our side we are quite happy. I am happy. The balance is a lot nicer to drive as well which is good.

“Compared to last week we’ve tried a few different directions just to understand the car a bit more and I think we are heading into the right one, so I am pleased for that. Of course we have to see what will happen with the weather, otherwise we will find out on Sunday.

“Anyway in the race we are a bit more competitive but already over one lap we cannot complain,” summed up Verstappen, who was similarly happy with the race pace, even though it is early on in the progression of the F1 weekend.

Teammate Alexander Albon was thereabouts but had a difficult time all-together. Overall, he feels good in the car but admits needing to do a bit more. On the spin, though, he put it down to being greedy and losing rear which was ‘nothing serious’.

Surprisingly, Mercedes sat behind Red Bull and this is despite their aforementioned dominance that was apparent just one week ago. In FP1, both Lewis Hamilton and Valtteri Bottas trailed Verstappen by a few tenths, but on the medium compound of tyre.

Yet, with the soft tyres on in FP2, Bottas was the sole Mercedes car fighting the Red Bull driver, as Hamilton sat in sixth, where he struggled majorly. This result takes on more significance as the threat of a Saturday washout looms.

The Brit was unsure of the reasoning for his pace drop off, specifically after such a strong morning, and will be hoping for decent conditions tomorrow so that he can flesh out the issues on track and qualify for the race in a better position.

“It felt relatively normal, but it was quite far off, so there’s a lot of work that needs to go on in the background to try and figure out why,” said Hamilton. “I was feeling good in practice one and the start of P2 felt pretty good, and then it just started to drop off. Others out there are quick, and Valtteri’s obviously got good pace.

“It will suck if we don’t get to qualify, because it wasn’t great, I’ll be starting further back than even last week, so it will definitely make it challenging. I’m trying to do the dry dance, if there’s a dry dance to make sure there’s no frigging rain for Sunday.

“It does seem that the others are getting pretty quick, or we have slowed down, one of the two. As I said we’ve just got to do some work. I hope we can drive when it’s raining, it’s fun out there, so hopefully we can still drive in the rain,” summed up Hamilton.

Bottas, meanwhile, said of his day that practice was productive for both himself and the team as they used the time to test their new reliability upgrades after a scare last weekend. In contrast, Mercedes-powered team Racing Point had a sterling day.

They topped the morning timesheets with Sergio Perez, and had their cars third and fourth respectively in the latter half of the day. It was the first time in quite a while that a ‘midfield’ outfit topped a session, and the Mexican put this result down to a better understanding of the RP20 after a rocky start to a promising season last weekend.

“It’s been a promising day,” said Perez. “We’ve been chipping away and learning about our car, and that’s been positive so far – exploring where we can make improvements and find performance. It’s very close among the top teams, but we’ve shown that both cars are in the mix for points, just like we were last weekend.”

Teammate Lance Stroll also had positive things to say where he revealed that the team trialed some new ideas looking at the data from last weekend. Meanwhile, Friday was less positive for McLaren, where Lando Norris had a lower-than-expected lap count, and was off the pace somewhat in FP1 and FP2, coming home P14 and P8 in those sessions.

The young Brit blamed chest pains for the low lap total, but did acknowledge that other F1 teams seem to have extracted more out of the one-week break than McLaren did for Styrian GP. He also received a three-place grid penalty for overtaking under yellow flags – a move he described as ‘silly’ as Carlos Sianz spoke about set-ups and other various topics.

“I had a difficult day with a few setbacks,” said Norris. “I didn’t complete as many laps as we would’ve liked to because of a couple of problems, but the car still feels good and I think we have decent pace. I think a few other teams have stepped it up a little bit more and extracted more than we could since last weekend, but we’re still in a good place.

“The car feels nice and that gives me good confidence. Regarding my health, it’s just something, I don’t know where, in my chest or something. I hit the brakes and in the compression, it spikes up massively, so I’m just afraid to brake anywhere, which is not ideal around here. It’s been pretty frustrating. I’ve not felt confident in the car in terms of pushing it and so on, so hopefully I can get fixed and be ready for the next session.”

Norris had even said that he consulted a doctor present at the circuit for the F1 Styrian GP, as did Renault’s Daniel Ricciardo after a major shunt in FP2. The Australian – who had a solid FP1, but failed to set a lap in FP2 due to his crash – had limped out of the car, but he assured people that he was merely bruised.

“Unfortunately, it was a very short second session for us,” said Ricciardo. “That first push lap was going quite well up until Turn 9. It was a mistake, it all happened very quickly so I’m not sure what went wrong. I turned in and just lost the car straight away. I know these things happen with cars and in F1, so it’s not out of the ordinary.

“The car felt fine this morning, especially towards the end. The second session would have been interesting, so we’ll just have to find out our pace. I hit my knee on the steering column when I came in. So just a bit bruised. But they checked it, literally just some bruising. I am fine but car was pretty beat up.

“I feel bad of course for not only my knee but for the boys and the team, but I was trying to understand what went wrong. It is one of those that goes so quickly, but yeah, just one of those ones. I turned in and just as I turned, there has been a bit of a tailwind we saw that maybe helped me a little bit, with losing the rear but nothing with the car broke so it was obviously just on me.”

Teammate Esteban Ocon explained that he got through his planned programs with few hiccups. While still seemingly off the pace, Ferrari did have a more positive Friday in F1 Styrian GP than they did in last weekend, as Sebastian Vettel stated that the car felt much better, even though Charles Leclerc said the day was difficult from his end.

The German also talked through how they used their time. “The car felt a lot better than last week,” said Vettel. “Right from the start, it was a different car and I was just able to get on with it. Now I hope it stays like this. If you look at the time sheet, I got my best lap deleted so obviously it wasn’t a great day for lap times.

“For us, the main thing was testing the upgrades that we brought. We put them on the car step by step and they seemed to work well. We still need to have a look and find the best window where the car is happiest. We tried quite a few things on the brakes and I still need to find the rhythm,” summed up Vettel.

They had updates with a new front wing, new floor and some aero parts. Like Vettel, Leclerc felt good with the upgrades too, even though they are still slightly off. Meanwhile, looking at the lower half, AlphaTauri seems to be better placed but there was a divide among their F1 drivers like we saw at the end of the FP2 session.

Daniil Kvyat – who spun – felt the car was not quite yet in the right spot, while Pierre Gasly explained that his day was trouble-free, even if he was shouting on the radio. Alfa Romeo, meanwhile, had a day that was taken positively by both drivers, one of whom was test driver Robert Kubica, who explained that he was merely happy to be in an F1 car again.

Kimi Raikkonen also stated he was happier with how Friday of F1 Sturian GP went than hpw it was last week, which showed in his lap times in FP2. Meanwhile, Williams was another team to have been down on the day in half of the garage, with George Russell telling of struggles with set-up.

Although the Brit bettered the Haas duo still. Reserve Jack Aitken was thrilled to get behind the F1 wheel as Nicholas Latifi rued the gearbox issue. As said above, Haas had a poorer day, with Romain Grosjean explaining that he struggled with balance and inconsistency, and Kevin Magnussen saying they weren’t as competitive as originally hoped.