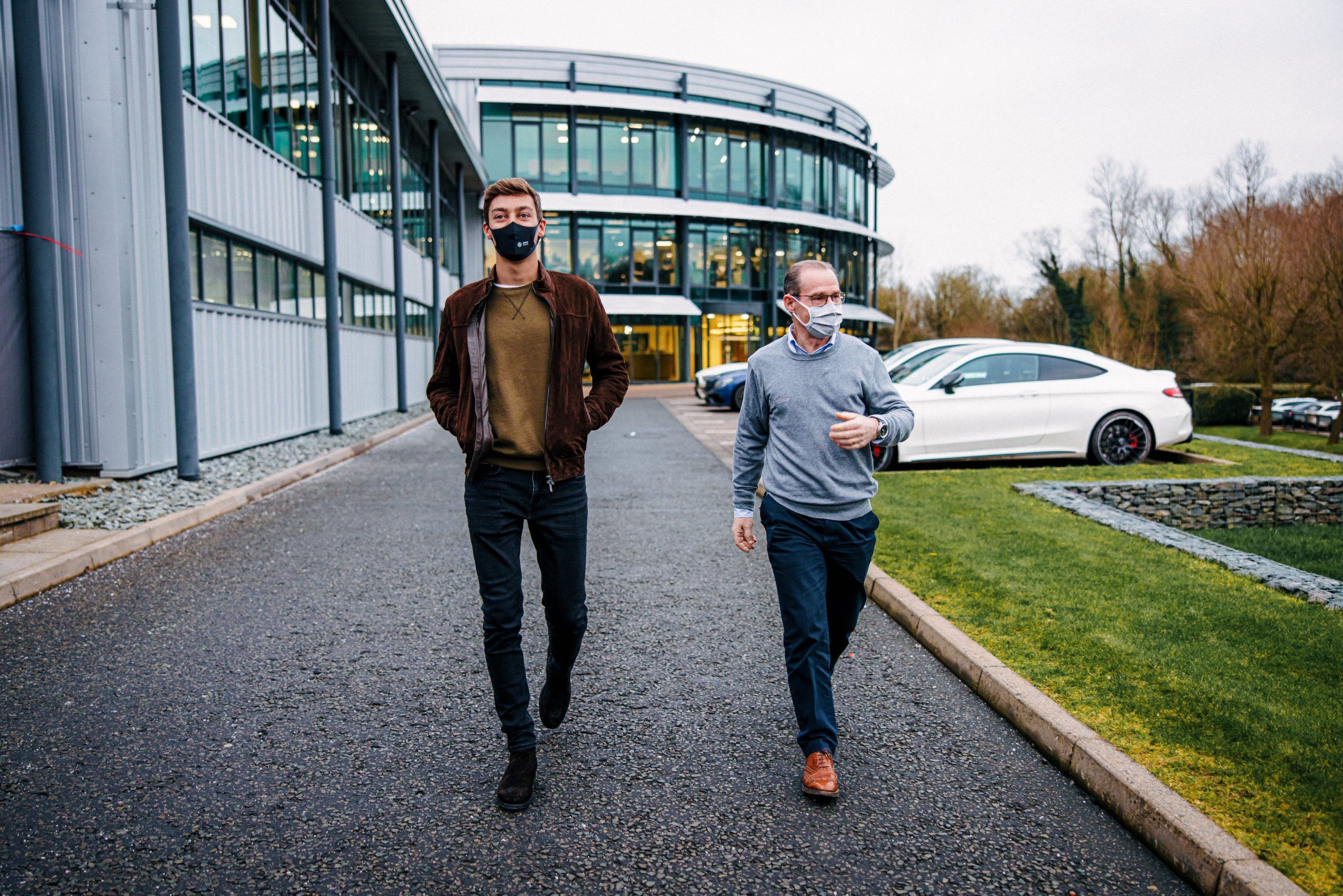 George Russell feels that the timing of his long-awaited move from Williams to Mercedes couldn’t have come at a better time with the “fresh slate” everyone is facing in this upcoming F1 season.

The British driver was confirmed to be replacing Valtteri Bottas as a full-time Mercedes driver after his best ever finish at last year’s rain-soaked Belgian GP. He has however raced for Mercedes in F1 before, when Lewis Hamilton tested positive for COVID-19 prior to the 2020 Sakhir GP, Mercedes took the opportunity to parachute in Russell.

He was on course to win the race had it not been for a team radio error and later a puncture that thwarted his spectacularly impressive drive. Mercedes will have been developing their all-new W13 in the background since that time, with Russell now entirely focused on mastering it.

“First impressions of W13 have been interesting,” Russell admitted in his ‘first interview’ on Mercedes’ YouTube channel. “It’s a very different car to the previous era and the characteristics of how the downforce is produced is completely different so we’re still learning as we’re going.

“There’s still a huge amount of improvements to be made to bring everything together to make it as nice as possible to drive which I foresee a lot of people being in the same boat because we’re just learning so much day after day whether it’s in the wind tunnel or in the simulator.

“I think it’s going to be a year of development and I think everybody wants to go to the first race and have the fastest car possible but what will be more important is understanding what your limitations are and how you’re going to improve from those limitations to build yourself the best foundation possible,” summed up Russell.

Additionally, Russell spoke about being part of the Mercedes family even before his Williams stint being a junior which has allowed him to get straight into the business part as he terms it more as a ‘return’ than a ‘new joining’. He talks about his winter training with regards to physical work along with learning about the new car in simulator.

When asked about the impact of switching to Mercedes at the same time as a technical regulation shake-up, Russell says that he believes it to be a good thing. “I see moving teams during the regulation change as a positive in all honesty because we‘ve got a completely different car which is a completely different philosophy to previously, different tyres, working with new engineers and I think starting from a completely fresh sheet of paper is beneficial for all,” he started.

“Whereas I think if I stayed with Williams for this season there’s always things in the back of your mind that you learnt on the previous era of cars that will always subconsciously carry through into the future. Whereas if you are truly starting from a fresh slate I think that can only be a beneficial issue,” summed up Russell.

Meanwhile, the team’s trackside engineering director Andrew Shovlin also took to Mercedes’ YouTube channel, stating his predictions for how the early part of the season will unfold. There’s a lot of learning we’re going to have to do at the circuits and when you get a new car you’re always learning trying to understand how to get the drivers completely happy with the balance for that all-important lap in qualifying, but the learning curve here [in 2022] is going to be much steeper.

“We’ll be finding real lap time hopefully with every run but certainly with every day of testing we’ll hopefully have moved that setup on a stage, and that’s going to carry into the racing,” hopes Shovlin. “There’s going to be an enormous focus especially in those early races of trying to understand where that performance is and trying to get the car in the best possible condition.”