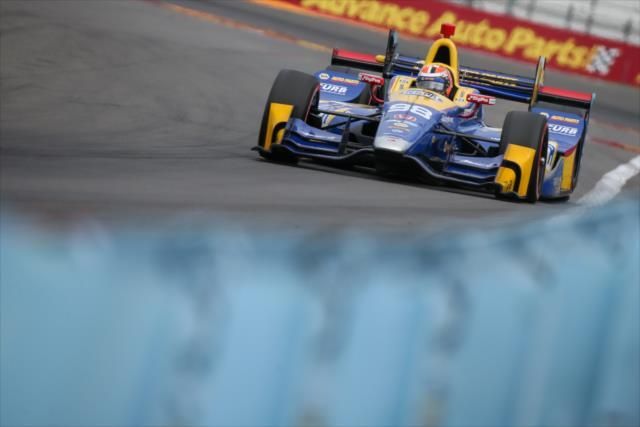 Alex Rossi has won in Watkins Glen from Pole and after recovering from trouble. Dixon has finished second with Hunter-Reay third. Problems for standings leader Newgarden have left the title battle very tight with just one race to go.

At the end of first lap, all drivers except Max Chilton and JR Hildebrand, who would pit on the next lap, pitted. Rossi kept the lead, followed by Hélio Castroneves and Newgarden. Some areas on the track, however, were still wet, which caused some slips. Castroneves passed Rossi for the lead.

On lap 6, James Hinchcliffe‘s car stopped on a runoff area, causing the first Caution of the day. The Canadian driver retired and green flag waved again on lap 9. Dixon passed Newgarden for third place and, on lap 15, Sato‘s problems came back and he parked the car on the grass, forcing a second yellow flag.

Almost all drivers pitted, which changed race order. Spencer Pigot, who hadn’t pitted, was leading, with Castroneves 6th and virtual leader, followed by Rossi and Hunter-Reay, who had won 3 places on the Pits.

Green flag came back with drivers on alternative strategies on the lead. Rossi and Hunter-Reay, both on soft tyres, overtook Castroneves, on hards. 98 and 28 didn’t take much time to pass Jack Harvey. Dixon overtook Newgarden and the duo of Andretti Autosport passed Marco Andretti and Max Chilton to move up to second and third.

On lap 23, Pigot pitted and Rossi recovered the lead. But the Andretti Herta driver had had problems while refueling and had to pit again on lap 25 and losing, maybe, all his options to win.

However, everything changed again as Sato, who had returned to track, had more problems and yellow waved again. Almost every driver pitted again and Rossi returned to the lead. Green came back on lap 30 with Pigot, Chilton, Hildebrand and Hunter-Reay behind Rossi.

Hunter-Reay and Dixon passed Hildebrand, who had more laps since his last pit. Pigot pitted on lap 38 and so did Rossi and Chilton on lap 42. Drivers on the lead pitted later and positions became “normal” again.

On lap 46, Newgarden and Power pitted and, returning to the track, the #2 hit the wall and was hit from behind by Sébastien Bourdais. Pace Car was deployed again with Rossi, Dixon, Hunter-Reay, Castroneves and Graham Rahal on the lead. Tony Kanaan, who had also hit the outside wall when leaving the Pits, retired.

Green flew again on lap 50 and, despite Dixon tried to catch Rossi, he didn’t manage to get the lead and Rossi took his second Series win after that dramatic win at 2016 Indy 500. In second place has finished Dixon, who is now very close to the championship lead with Hunter-Reay third. Castroneves, Rahal, Power, Charlie Kimball, Chilton, Pagenaud and Carlos Muñoz complete the Top 10.

With these result, the standings get very tighter and the finale will be held with 7 drivers with mathematical options to win the championship: Newgarden leads followed by Dixon 3 points behind, Castroneves 22, Pagenaud 34, Power 68, Rossi 84 and Rahal 94. That epic finale will happen in two weeks at Sonoma Raceway.