Home In the Spotlight Rossi, Morbidelli not hugely happy with misery in Qatar MotoGP race 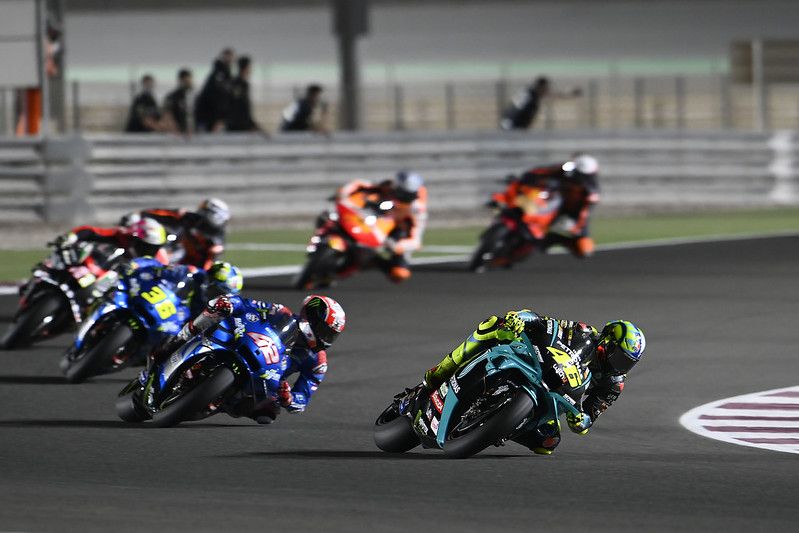 Valentino Rossi and Franco Morbidelli were left disappointed after a disastrous run for both in Qatar MotoGP weekend, where Yamaha won.

While Rossi started well in Qatar MotoGP race aboard the Petronas SRT Yamaha, teammate Morbidelli dropped like a stone to the back of the field with an apparent issue. Starting with the former, he looked good early fighting in the Top 10, but fell back.

He did have a tangle with KTM’s Brad Binder, but his pace dropped eventually, as he started to struggle with his rear tyres. Rossi revealed that the soft tyres gave them temperature issues already on Friday, but they were forced to use it as the hard wasn’t fast enough.

“We expected more for sure, especially after the qualifying, but in the race I struggled very much because after some laps I had problems with the tyres,” started Rossi. “This also happened on Friday. We tried to do something but unfortunately we didn’t fix the problem.

“For some reason we stress too much the rear tyre and it looks like the rear tyre starts to lose performance and grip, so after some laps I’m not fast enough. We hoped that in the race we would have less problems because the temperature is a bit colder, but unfortunately the feeling was similar and the race was difficult.

“I struggled a lot. I lost a lot of positions. We’ve had a long meeting, I said what my feelings are and now we will try to improve and fix the problem to be stronger this week. On Saturday, we tried the hard rear because on Friday we had the problems with the soft, but with the hard we were not fast enough.

“So we decided to race with the soft. But we faced the same problem even if the temperature was less in the race,” summed up Rossi, as he noted that the set-up Petronas SRT used was different to that of Yamaha, which helped them to win via Maverick Vinales.

For Morbidelli, though, an issue on his A-spec Yamaha derailed his race even before the start. The Italian expected a tough run but it was more in the disaster side as he was losing a second per lap. “We had a problem on the grid, but we decided to go anyway for the race,” he said.

“It is a problem that we need to investigate better because I think it happened also other times during the weekend, but in the race we saw clearly that something was wrong, and unfortunately we had to make such a bad race. It affected me during the whole race. I cannot tell you what it is because we are not sure yet.

“We are trying to understand well what it is. Basically, the rear-end of the bike starts to feel ’empty’, like I have no damping in the shock and I have no shock. I can’t turn. Well, I can turn, but I need to ride 1-second slower. I can accelerate, but I need to ride 1-second slower,” summed up Morbidelli, as speaking to MotoGP.com, the Italian didn’t sound too optimistic about Yamaha checking on his bike quick enough.

While Vinales, Fabio Quarataro and Rossi have the factory spec M1, Morbidelli is forced to ride the A-spec machine, which he reckons makes him the last rider on the list for Yamaha. He hopes that the Japanese manufacturer takes the matter seriously and solve it quick enough, rather than delay it and focus on the three others.