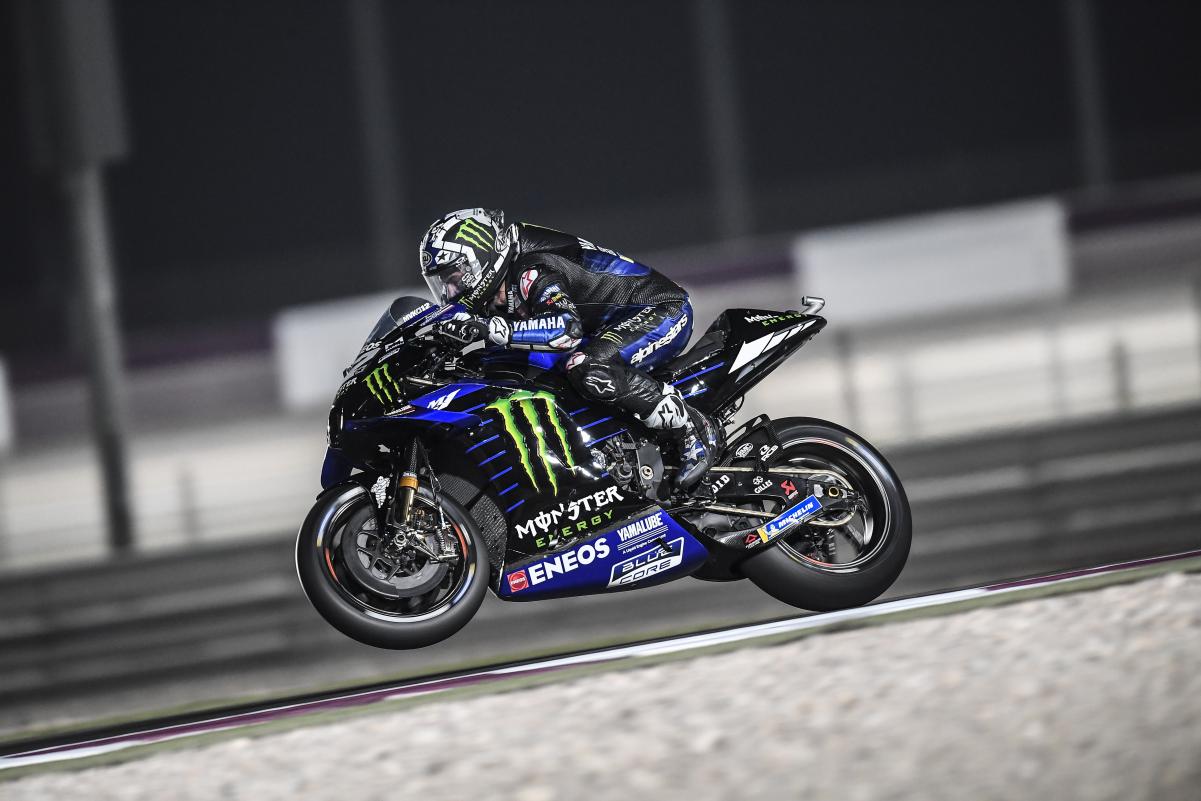 It was a mega start to MotoGP Qatar GP by the Ducati riders as Francesco Bagnaia led the way from Jack Miller and the Pramac pair of Johnn Zarco and Jorge Martin. The Spaniard made up 10 places from 14th on the gird to be fourth with the holeshot device.

While Bagnaia led on, Zarco cleared Miller for second, as Martin started to drop down. It was a bad start for the Yamaha trio, where Aprilia’s Aleix Espargaro stood fifth from Fabio Quartararo, Valentino Rossi (Petronas SRT) and Maverick Vinales.

The Top 10 was rounded by the Suzuki pair of Alex Rins and Joan Mir, as Tech 3 KTM’s Danilo Petrucci crashed out in the first few corners. At the front of the field, Yamaha riders started to make up places clearing both Martin and Espargaro.

Quartararo was up to fourth, bringing Vinales with him. The Frenchman, in fact, passed Miller in a brave move to be third as the Australian lost to the Spaniard as well, to be fifth. The Suzuki duo were just behind him, with Rins still ahead of Mir.

Martin dropped to eighth from Espargaro as KTM’s Miguel Oliveira brought himself into the Top 10 after passing Rossi, who started to fade. The Italian had the fighting riders behind him with Honda’s Pol Espargaro in 12th from KTM’s Brad Binder.

The points position then had Honda’s Stefan Bradl and Avintia’s Enea Bastianini, where Petronas SRT’s Franco Morbideli lost out hugely to be 19th. The second rider to crash out from the Qatar MotoGP was LCR Honda’s Takaaki Nakagami.

While Bagnaia led the way from Zarco, the positions behind continued to change. Vinales moved himself up to third as Miller was fourth as Rins moved to fifth, which dropped Quartararo to sixth ahead of Mir, A Espargaro, P Espargaro and Oliveira in the Top 10.

The fight for MotoGP Qatar GP was truly on as Vinales cleared Zarco in the chase of Bagnaia. He tried multiple times to pass the Italian and eventually did so on the inside as Zarco steadied in third from Rins, who managed to clear Miller.

Mir passed Quartararo to be sixth as A Espargaro started to close in on the Frenchman, along with P Esparagr, with Bastianini climbing up to 10th. Oliveria was 11th from Martin as Bradl was 13th from Binder and Rossi in the points position.

Having taken the lead, Vinales checked himself out nicely, as Zarco cleared Bagnaia for second. The Italian had Rins on his tail with Mir slotting in fifth from Quartararo, who managed to clear Miller, while the Espargaro brothers steadied on.

Amid the fight between Bagnaia and Rins, it was Mir who took the advantage of the situation and pass his teammate to take fourth. Having taken his teammate, the 2020 MotoGP world champion managed to get third from the Ducati rider.

It was all going down for the factory Ducati as Miller was passed by both A and P Espargaro to be ninth. At the front, Vinales checked out his rivals at ease to open the 2021 MotoGP season with a win in Qatar GP as the straightline speed caught out Mir in the end.

Mir went slightly wide to cut the slipstream but that cost him two places to fourth, with Zarco ending up second from Bagnaia. Quartararo fought back to fifth with Rins ending up sixth from A Espargaro, P Esapragro, Miller and Bastianini in the Top 10.

There was a fight back from Bradl to 11th, while Rossi was 12th – replays showed that he lost places early after a tag from Binder, who ended up 14th behind Olivera, while Martin rounded out the 15 riders in the points position.