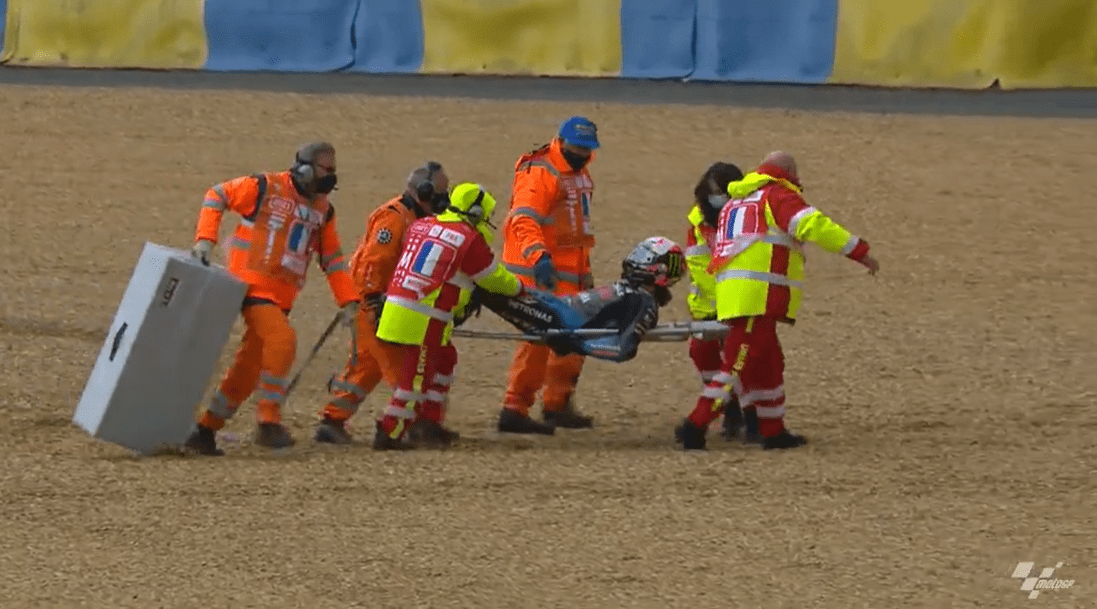 Valentino Rossi, Franco Morbidelli and Pol Espargaro react to their coming together in French MotoGP race, which hampered their running.

Even though it was a dry start to French MotoGP race, the track conditions remained slightly damp, which made it a bit tougher for the riders. There were no huge clash at the start in Turn 1, but few corners later, three riders came together.

It started with Honda’s Espargaro having a big moment while exiting the Chemin Aux Boeufs chicane. It allowed Petronas SRT’s Rossi to get by, while his teammate Morbidelli was right on the tail of the Spaniard to push through, as well.

As Rossi resisted Espargaro, Morbidelli tried a move in a tight corner. There was little room, as a kerb moment from the latter meant, he touched the back of the Spaniard. While the latter went off onto the gravel, the remaining too lost multiple places as a result.

In fact, Morbidelli tried to run through the gravel but fell on his knee. He was getting stretchered off but after he saw it was raining, he decided to continue and eventually finished four laps down on the leader. “I think the blame has to be shared because when I saw that Pol had a moment, I thought immediately that he was out,” he said to media including MotoGP, Crash, Motorsport Network, The Race and more.

“So, I went to overtake him because I had much more speed and went on the inside. After the moment I thought he would’ve taken the next corner a bit more careful. Instead, he was really good and aggressive to try to try to immediately re-attack Vale.

“I wasn’t expecting that and I hit him on the rear and ended up outside the track. I couldn’t control the bike. That’s the incident according to me. My knee isn’t in the best shape at the moment and it twisted again when I went to put my weight on it.

“When I saw it was raining I decided to return to the pitbox, so thank you to the team for helping me to push the bike back. I restarted the race with the hope of picking up some points, but it was not possible,” summed up Morbidelli, who revealed that he hurt his knee again in the race after injuring it during training.

Meanwhile, relaying his side of the story, Espargaro, stated: “The problem was that Morbidelli came in too hot and just did a mistake on the brakes and took me out. Outside I had Valentino, and I took out Valentino. I found Valentino here in the paddock, we talked and he agreed with me.

“It’s clear that Franco braked too late and he got contact with me and then I got contact with Valentino. This is something that can happen in racing. That’s why I didn’t complain about it because it’s a racing incident. But the one who started the action in this case was Morbidelli braking too late,” summed up Espargaro.

And finally, Rossi, added: “Pol had a big moment, a big slide, and I overtake him. After he tried to come back inside me at T11 and I touched with Pol, but Franco also arrived and Pol put me outside the track. From P7 I go to P13 and lost a lot of time.”