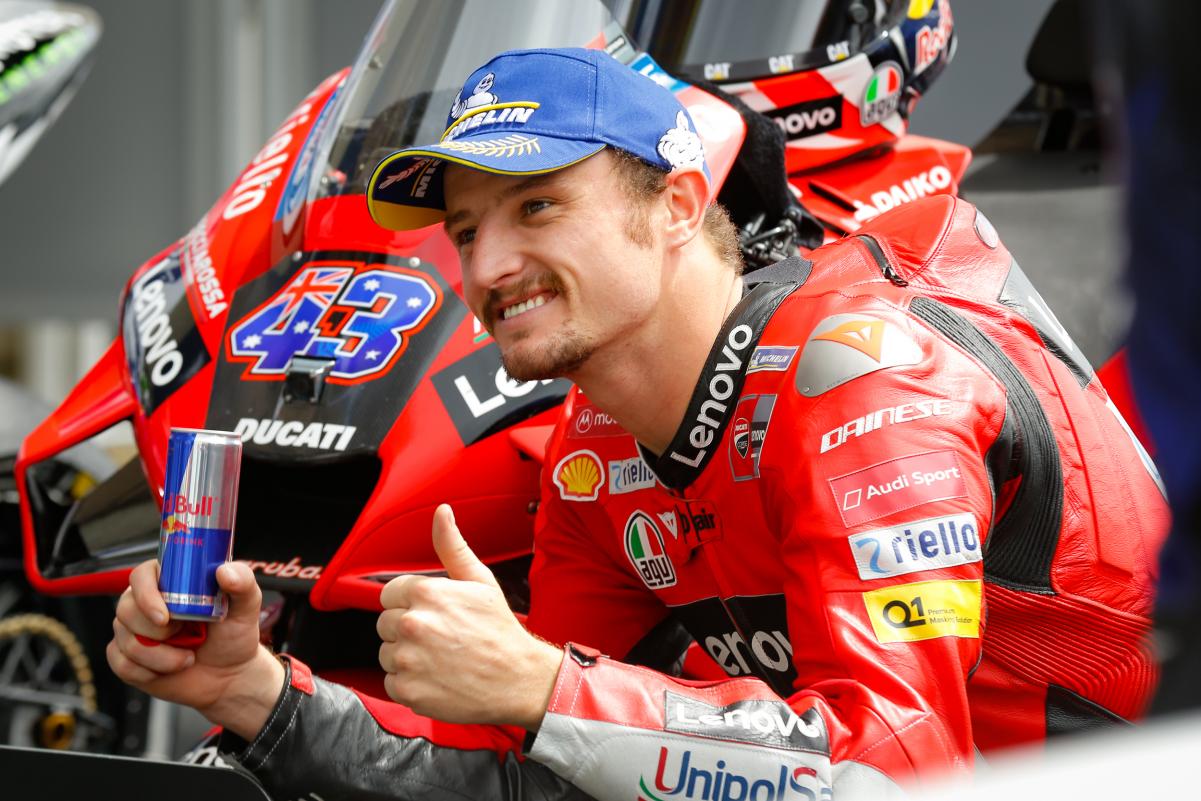 The MotoGP French GP started under dry conditions but with clouds around, as Ducati’s Jack Miller led the way from Yamaha duo of Maverick Vinales and Fabio Quartararo, where the latter lost two places from pole position, despite a decent start.

Honda’s Marc Marquez was fourth from LCR Honda’s Takaaki Nakagami, as the other Honda of Pol Espargaro got caught out in a moment, which dropped him to ninth. The melee caught out the Petronas SRT duo of Franco Morbidelli and Valentino Rossi.

The latter dropped to 13th, as the former went off on the gravel. He tried to stay on but fell down. He, however, got up and rejoined the French MotoGP race. This helped Suzuki’s Alex Rins to be fifth from Aprilia’s Aleix Espargaro and KTM’s Miguel Oliveira.

The other Suzuki of Joan Mir was eighth from Espargaro, Pramac Ducati’s Johann Zarco, Tech 3 KTM’s Iker Lecuona, Rossi, Tech 3 KTM’s Danilo Petrucci and Avintia Ducati’s Luca Marini in the Top 15 – where the latter dropped back after a Top 12 qualifying.

As it started to drizzle a bit, the fight between Miller and the Yamaha duo intensified. It became a lead fight between the Australian and Quartararo, after Vinales dropped behind Marquez and Rins, who cleared Nakagami to move up to fourth.

Miller and Quartararo went back and forth for couple of laps, as the rain started to get harder. They soon had to pit to swap bikes for the rain tyres, which allowed Marquez to emerge as the French MotoGP leader after a quick change and strategic position.

He had Rins and Quartararo behind him, but the former crashed out on his first lap. He made it back into the pitlane to change his bike, but teammate Mir didn’t get a chance to swap his bike after crashing out in the final corner, while trying to enter the pits.

Even Miller had an off but managed to swap his bike. There was a double long penalty for him and Ducati teammate Francesco Bagnaia, for speeding in pitlane. Despite that, the Australian kept up with Quartararo and passed him for the French MotoGP lead.

Quartararo was handed a long gap penalty too after almost swapping the wrong bike, where he got into Vinales’ box, before realising the wrong move. The Frenchman had some luck earlier on after a crash for Marquez, which helped him to lead the race.

Marquez managed to rejoin, as Oliveira crashed at Turn 3, while Aprilia’s Lorenzo Savadori was forced to stop due to a mechanical issue. At the front, though, Miller led comfortably from Quartararo, as Zarco moved up to third after clearing Nakagami.

A Marquez was fifth, as Petrucci climbed up to sixth from Bagnaia, P Espargaro, Vinales and Rossi in the Top 10. A gritty fightback from M Marquez saw him move up to 11th but the Spaniard had a heavy crash for the second time at Turn 6, which ended his charge.

Just few laps before, Rins’ day ended in a second crash too, while A Espargaro joined teammate Savadori in the retirement list due to a mechanical issue. As it started to dry down with the sun shining, Miller continue to lead the French MotoGP race.

Quartararo lost second to Zarco, who showed solid pace in the second half. A Marquez climbed up to fourth but had Bagnaia behind him, with Petrucci in sixth after Nakagami fell to seventh from Espargaro, Vinales and Rossi in the Top 10.

Despite the dry conditions, riders stayed on their wet tyres, as Miller saw-through double Long Gap penalties to win French MotoGP race in a Ducati 1-2, with Zarco second. Quartararo held onto third, even though he was losing time hugely.

Bagnaia fought through to fourth along with Petrucci and Marquez – all three coming through from outside the Top 10. Nakagami was seventh from Esparagro, as Lecuona cleared both Vinales and Rossi to be ninth in a double Top 10 for Tech 3.

Vinales lost to Lecuona on the line to be 10th from Rossi, Marini, KTM’s Brad Binder, Avintia’s Enea Bastianini and Pramac’s Tito Rabat in the Top 15, as Morbidelli ended up 16th, but four laps down on the leaders.

#MotoGP #FrenchGP Race results, which started dry, rain fell on lap 2 but from halfway through, it got dry again after all riders switched to their wet weather bikes. Miller did 2 long lap penalties and still won. #MsportXtra #ThrillerMiller @jackmilleraus pic.twitter.com/JPKKCe6rZP